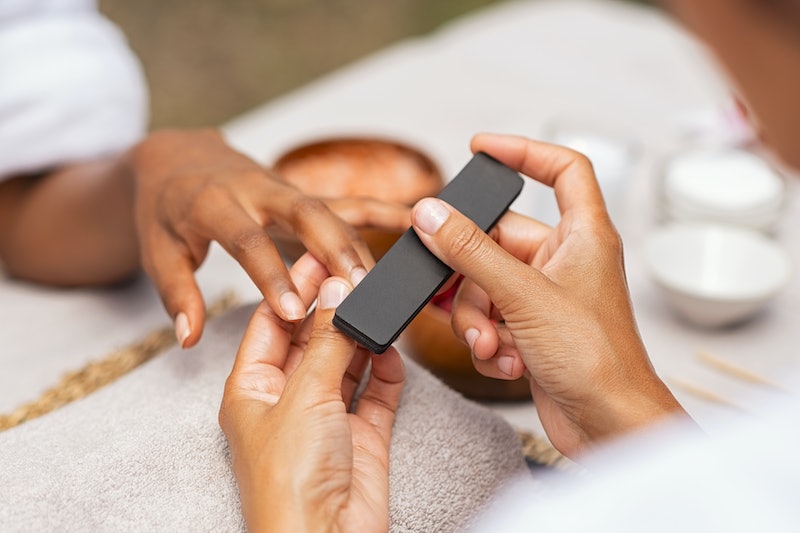 When you’re trying to achieve smooth and shiny nails at home, the best nail buffers and shiners are essential. A buffer block is the best option for most, as this all-in-one tool has a variety of grit textures that are specifically designed for the different steps in your nail-care routine — buffing and shining included. But there are other tools that might best suit your needs.

If buffing and shining is your only goal, a chamois buffer could be most effective. While an electric manicure set could be best if you just want to get the job done as quickly as possible. Just be sure to avoid using a traditional nail file for buffing, since files have lower grit numbers (aka rougher textures) that can do more damage than good. Filing is still a good choice for shaping the nail, though, and many buffer blocks feature one side intended for filing, along with three sides better suited to buffing and shining. In addition to the filing surface, it's typical for a buffer block to feature one slightly rough side to buff away ridges or dips, a medium grit side to better smooth things out, and a final softer side that can create an ultra-smooth finish, and since buffers are so versatile and are usually inexpensive, they're a great option for most people.

When using a chamois buffer, the key is to pair it with a buffing cream, which flattens out ridges and imperfections for a smooth and shiny nail. It's worth noting that while a chamois buffer is great for buffing and shining (and nothing else), it can be difficult to clean. If you don’t want to manually do your nails, electric manicure sets have interchangeable heads that can file, buff, shine, and more in a fraction of the time — just be careful not to overdo it with these powerful tools.

The below four picks are all highly effective at buffing and shining your nails, creating a professional-looking manicure from the comfort of your home.

With more than 3,000 reviews on Amazon and solid 4.6-star rating overall, reviewers on the site are clearly in love with this buffer block from Tweezerman, with tons of people commenting that they're shocked by how well it actually works. The four-sided block features a variety of grit textures for different tasks, and it's color-coded and labeled for ease: side one is for filing your nails, side two is meant for buffing, side three is for smoothing everything out, and side four will provide shine. Best of all, each of the pads on the block can be removed and replaced — it even comes with four additional pads per side — allowing you to get a ton of use with each order.

Enthusiastic Amazon review: "I've bought many DIY manicure products over the years and have a stash of my favorite tools. I realized the ones I liked best all say Tweezerman, so I thought... maybe I'll spend a little more on a buff block that I normally pay $3 max for. It's so cool that you can replace the sides you wear down most as you need to rather than replace the whole block when one side is trashed. But... It also works better. A few passes with each side and my fingernails look like the surface of water. It is so well made, that I can use it minimally to avoid wearing my nail thin and still get an awesome result."

2. A Budget-Friendly Pack Of Buffer Blocks

This nail file and buffer block combo set from BTYMS features a whopping seven different grits, ensuring that you’ll be able to do your entire nail-care routine with just this one tool. As if that wasn’t enough, this pick also comes with another major plus — its price tag. For less than $10, you get 12 buffer blocks, which should last you quite a while since they can be cleaned with water and reused.

The seven different grit textures are numbered, color-coded, and labeled, so you can easily determine the best one to use for the task at hand. Number one is a coarse grit to shape your nail, two is a medium grip to refine the shape, three is a fine grit to smooth out the edges of your nail, four conditions the nail, five smoothes the nail, six is for buffing, and seven is the finishing touch, it polishes and shines to perfection.

Enthusiastic Amazon review: "I love smoothing out and polishing my nails and I have no complaints about this product! It has a nail file, smoother, and polisher in one. Quite a few of these sticks came at a time so I have a lot in stock for the future. Each one is individually wrapped and they are [definitely] worth it for the price."

When used in combination with a buffing cream, this chamois nail buffer will seriously be a game changer for both buffing and shining your nails. The 5-inch buffer features a soft leather material that's gentle yet effective on nails, and it has a handle that allows you to have better control over the tool as you work. When you're finished buffing and shining your nails, this pick comes with a plastic cover that snaps on for storage.

Amazon reviewers are totally wild about this pick, touting it for its ability to make nails look amazing even without polish or a trip to the salon. If you need a buffing cream, reviewers like this one.

Enthusiastic Amazon review: "Love this, I use it with the buffing cream and get a hard beautiful shine. My nails are stronger and the nail looks pink and healthy, no more polish for me. I use the 2 together once a week and might buff with the buffer only once or twice additionally."

If you just don’t seem to have the time or energy to manually buff and shine your nails, this manicure set from Fancii will majorly speed up the process. The electric manicure set features five interchangeable heads that allow you to file, shape, buff, and shine your nails in a snap, all with minimal effort. Powered by two AAA batteries (which you'll have to buy separately), the machine can be used on both natural and acrylic nails, and it has an ergonomic design for your comfort. When the interchangeable heads are worn out, replacement heads can be purchased separately.

Reviewers on Amazon confirm that this pick certainly gets the job done; they give this machine a 4.2-star rating overall, after 8,000 and growing reviews. While nails that have been buffed and shined will definitely look lovely on their own, if you choose to use nail polish afterwards, this pick also has a built-in UV dryer to speed up the drying time.

Enthusiastic Amazon review: "Once I got the batteries in the buffer was great to use. I have vertical ridges on my nails that were deep, The fingernails would break right where the ridges were. This buffer got the vertical lines off and then the nails were shined. They looked great. The unit does a great job for such a little unit."

More like this
45 Comfy Things On Amazon That Make You Look & Feel 10x Better
By Kate Miller
43 Summer Basics Under $35 Reviewers Are Obsessed With
By Scarlett James
Of All The Cheap Beauty Products Out There, Experts Say These Work The Best
By Dena Ogden
These Are The Best Cheap Beauty Products Because They Work So Damn Well, According To Makeup Artists
By Alexandra Elizabeth
Get Even More From Bustle — Sign Up For The Newsletter