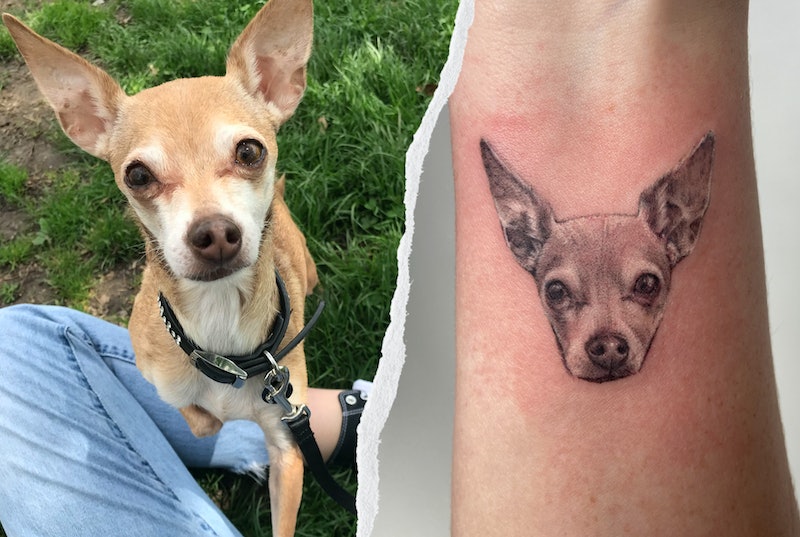 The day Ellie died was the worst day of my life. In my 29 years, I’ve seen the horrors of opioid addiction, battled anxiety and depression, lost beloved family members, and divorced my high school sweetheart. These are deep traumas that most people, luckily, never endure. But none of those tragedies prepared me for losing my kid.

Yes, I call my dog “my kid,” “my daughter,” and “my child.” And no, I won’t apologize for it. Because if you had asked that tiny creature who her mother is, she would have said me.

I got Ellie when I was 14 years old. Influenced by the feral-chic glamour of Paris Hilton and her dog Tinker Bell, I wanted a Chihuahua of my own. My father — a corn-fed Republican farmer who, until then, was a diehard Hunting Dog Person — refused, point blank. “Chihuahuas are mean, they’re yippy, they bite,” he said. “If you want one, you’re going to have to get a job and buy it yourself.”

Spoiler alert: That’s exactly what I did. At 14, I got the only job in my small town for someone so young: detasseling. Every morning at 4 a.m. I walked through corn fields, pulling the pollen tassel out of each plant. After two weeks, I had saved up enough to adopt the tiny, fawn-colored Miniature Dachshund-Chihuhua mix my mom had found online. Ellie was finally mine.

From the second I got her, that doe-eyed angel was the light of my life. Opposite of my father’s prediction, she was sweet, easy-going, and incredibly smart, but also fiercely protective of her family and a total mama’s girl. That, I think, is part of the reason our bond was so strong — she wasn’t a happy-go-lucky, slobber in your lap, would-go-home-with-a-complete-stranger type of dog. She wanted her mom and no one else.

Ellie was by my side through high school and visited when I moved away to college. When I accepted a job as a fashion editor in New York, she followed me there, too (a deep disappointment to my parents, who now identify as Chihuahua People). Ellie kept me sane through the pandemic and the divorce that followed, but by that time, she had started to age.

In the final of her 14 years, the vets we frequented often commented on our bond. Even by usual Dog Mom standards, we were incredibly close. I could tell what she was thinking by the look on her face and after watching my habits for so long, she could predict my every move.

After 1.5 years of all-day-every-day quality time during lockdown, her death hit me hard. Though they undoubtedly see the death of many pets, the ICU nurses seemed shocked when I fell to the floor, blind with tears and unable to walk.

I spent the following days sobbing on the couch, her absence louder than my screams. I clutched her tiny collar to my chest, yearning for the closeness I would never again have. That’s when I realized I needed a more permanent momento. Through my tears, I booked a tattoo appointment and, though I’d never given any thought to life without her, the designs came to me easily.

I got the wonky little floral-and-hearts design of her collar traced on the side of my arm and a tiny 14 at the crook — to remind myself that the immeasurable pain is a small price to pay for the beautiful years we spent together.

Though I already had “baby” (my nickname for her) inked on my ankle years prior, I felt like the new additions were necessary to my healing process. Our bond and my grief couldn’t be confined to an Instagram post and a few months of tears. I needed a grand gesture — something lasting, so that for the rest of my life, every time someone commented on the tiny symbols, I’d get to talk about her.

I relied heavily on my therapist, Shilpa Shah, LMHC of Woodrose Counseling, for grief counseling during the following months. Shah approved of my tattoos, saying that, as a tattoo lover, they were a healthy way for me to memorialize Ellie. And as I now approach the one-year anniversary of her death, we’ve begun discussing, once again, how to cope with my still-persistent grief.

“People can have different ways of grieving, which is not linear,” Shah says. “Tattoos provide a permanent reminder of a lost loved one and, in some ways, challenge the idea that we ‘move on’ from it. Tattoos are meant to be — as grief [is] — permanent in the lives of the bereaved.”

After chatting with Shah, I decided to get a fourth tattoo. This time, however, I wanted her face — a realist portrait of her “mamma?” expression, the one she used to give when she wanted something (in this case, attention). Though I always thought portrait tattoos were tacky, I needed, once again, to be able to look down and see her bright eyes looking back at me.

Right before the anniversary arrived, I got an offer that felt like fate from pet accessory company BarkBox. The pet subscription service was doing a giveaway, offering free tattoos for 100 lucky dog parents (you can enter to win one here). Though I had already planned to get the ink, this felt like a sign from the universe.

With BarkBox’s help, I booked a session with celebrity tattoo artist Evan Kim (@evantattoo), the only person I would trust to recreate a face I know better than my own. I cried throughout the process, as her beautiful face emerged in each new layer of ink. Now, when I look down, I see my sweet girl looking back up at me once more.

Kim captured her soul, her energy, better than any of my photographs. Each time I see my new tattoo, I feel like she’s here with me. Though the rest of my tattoos are minimalist, without shading or fanfare, I wanted a realist design for this one. This, Kim says, is a recent shift he’s noticed in the design requests of his clients.

“Previously, the aesthetic of the pet tattoo and its attractiveness was the focus. Now, the focal point of the tattoo is commonly the unique qualities that each pet carries; the face expressions that exemplifies their character or personality trait,” he told Bustle.

Known for his shockingly realistic style, dog tribute tattoos are a common occurrence in Kim’s day-to-day. According to him, my tears were nowhere near abnormal.

“Tribute tattoo sessions are often emotional and sometimes there are tears; completely understandable as there was significant love for the pet,” Kim said.

Though I’ll never move past the pain of living without Ellie, this tattoo truly does make me feel just a little bit closer to her.

Shop My Tattoo Care Starter Pack
A Complete Tattoo Care Kit
Foreverist
Supergoop! Glow Stick SPF 50 Sunscreen Stick
Amazon
More like this
I Tried Peace Out Skincare's Acne Day Dots Under Makeup & I'm Impressed
By Olivia Rose Rushing
This Week’s New Makeup Releases & More Beauty Headlines
By Audrey Noble and Erin Stovall
9 Must-Know Tattoo Trends For Spring 2023
By Carolyn Steber
13 January 2023 Beauty Launches Our Editors Can't Get Enough Of
By Rachel Lapidos
Get Even More From Bustle — Sign Up For The Newsletter
From hair trends to relationship advice, our daily newsletter has everything you need to sound like a person who’s on TikTok, even if you aren’t.