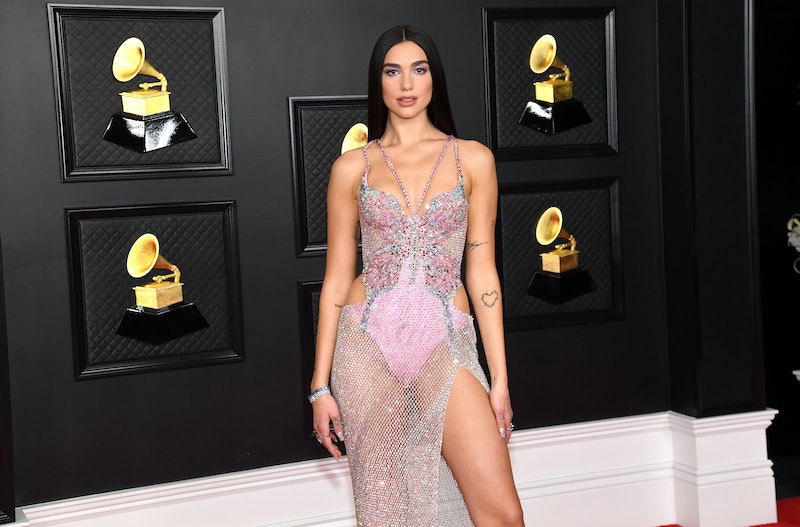 Butterfly imagery is believed to represent resurrection, renewal, and endurance as the insect undergoes a major transformation, starting out as a caterpillar. Lipa could be hinting at a major change in her life or career through the gown’s butterfly motif.

The front of the shimmery dress was covered in sequins in the shape of a butterfly with its wings outstretched. It also featured side cutouts at the hips, with a thigh-high slit. The sheer skirt showed off her bubblegum pink bodysuit underneath.

On the footwear front, she went with silver bedazzled stilettos. She topped off the look with Bulgari silver rings and blinged out bangle bracelets.

Lipa did an outfit change when she took to the Grammys stage to perform “Don’t Start Now” and “Levitating.” She began her performance wearing an oversized pink opera coat with balloon sleeves before ditching the coat to reveal a shiny pink bra and briefs set. But that wasn’t all — she then switched to an oversize, glittery purple blazer with matching sky-high stilettos.

Without a doubt, the songstress wanted to channel all the sparkly vibes with her Grammys looks, and she went all out with the sequins, glitter, and bedazzlement. Because there’s no really no such thing as too much sparkle, right?