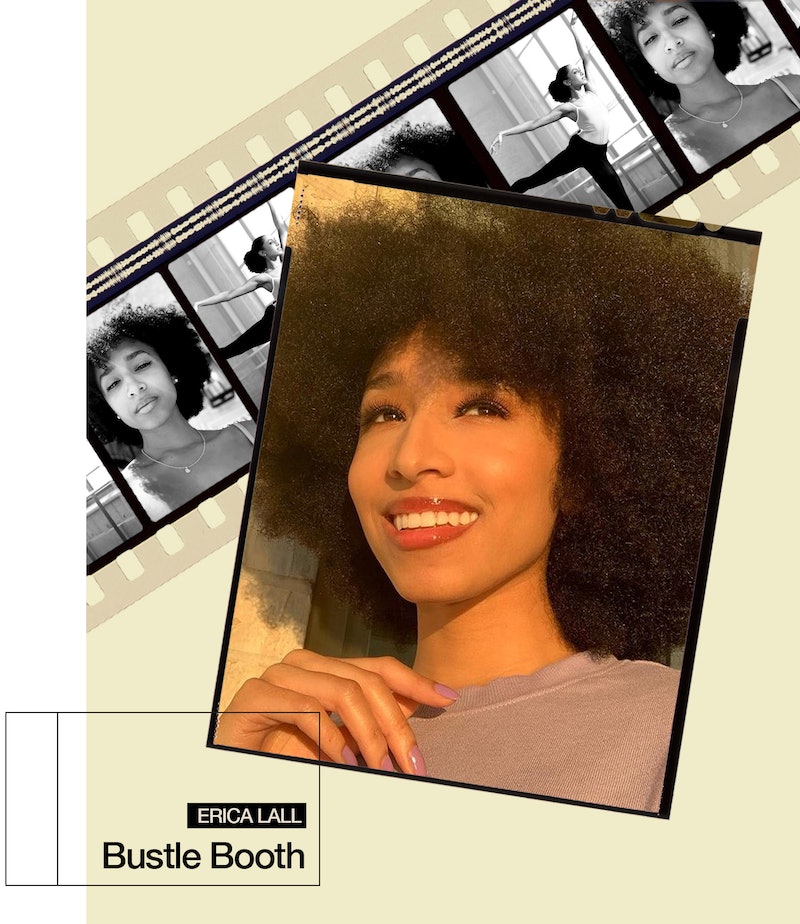 “I [was] performing The Nutcracker in California,” Lall tells Bustle. “The stage was completely still and I ran on with one other girl behind me. At almost center stage, I fell flat on my face right in front of the conductor.”

She immediately got up and to her surprise, started “beaming with joy.” That hiccup — one that might have embarrassed even the most confident performer — left her “filled with adrenaline” and primed for a comeback.

Navigating the unexpected is something Lall has perfected over the course of her career. The Texas native began her ballet training at the Houston Ballet Ben Stevenson Academy in 2006. She worked hard and eventually became a rising star in the ballet world, joining the American Ballet Theatre as an apprentice in December 2015. She officially became a member of the corps de ballet in May 2016.

Now, five years later, as coronavirus halts performances, she’s learning how to adjust and bounce back once again. For Lall, that means practicing regularly so she’s ready to perform as soon as the pandemic is over. “There’s nothing like being on stage,” she says. “Feeling the notes from the orchestra penetrate my soul, and hearing the crowd roar in appreciation, creates the most compelling attraction to this difficult career.”

Lall acknowledges that life as a ballerina can be intense. Days are typically filled with hours of practice and rehearsal. “So much hard work is put in and we are constantly striving for perfection,” she says.

To cater to a very active lifestyle, her personal style tends to blend fashion and function. One of her go-to wardrobe staples is a colorful, retro-inspired backpack by Herschel Supply Co. that houses her ballet slippers, leotard, and more. “My big sister gifted me my first Herschel backpack about five years ago,” Lall says. “I used it as a travel and in-studio ballet bag every day.”

Her love for the brand came full circle this year, when it tapped her to be a part of its Community of Travelers series, where she shares a day in the life as a renowned dancer in New York City.

Get to know more about Lall with her Bustle Booth questionnaire below:

I am actually not a coffee drinker at all. I drink black tea in the mornings and maybe herbal tea in the afternoon. A warm cup of tea makes me feel comforted.

I have New York, of course.

Montego Bay — My mom is from Jamaica and it’s my favorite place ever. Reminds me of my most at peace and relaxed state.

Lisbon — I went on a friend trip there and it was a really memorable trip and made me so happy.

I am very much a Pisces through and through. We are emotional and care about others before ourselves. I’m typically happy and smiley — most definitely a Pisces.

“That’s a nice boulder.” — Donkey, from Shrek. I watch it every time it’s on TV.

I loved Spongebob as a kid. It is still a favorite cartoon to this day. I know pretty much every word from the older episodes. I once made my parents listen to the Spongebob CD the whole time of a five-hour road trip.

I have been hooked on Girlfriends and Good Girls. And I just finished Ginny and Georgia.

Elaine Welteroth. I identify with her and have looked up to her for years. She breaks down barriers and sets an example for knowing your worth and striving for more, which I definitely relate to. I also love Zendaya, Yara Shahidi, and Vice President Kamala Harris.

Say Yes to the Dress! I’ve been dreaming of all things wedding since I was probably in elementary school.

Anything Hamilton — the entire show. Also, “Ironic” by Alanis Morissette.

The fact that I just completed the principal title role in the ballet Firebird with Collage Dance Collective. In such restricted times, I was able to do a role I have only dreamt of. In the beginning of March, I went to Memphis for the new staging of Firebird, and I didn’t think I’d have an opportunity like that so soon. It was nice to step away from life right now and think about your choices. Going to Memphis made me more driven and realize that I can do these things — that I do have the ability. It helped me know my worth.

Sometimes in big ballet companies, you’re not given opportunities you wish you could or should be given. And in such a restricted time, I was able to do such a huge role. Tennessee was so fun: being in the city and going to the zoo, but also just seeing people again (in our own bubble, tested multiple times a week), back in the studio rehearsing and performing, wearing costumes and makeup and filming again. It was inspiring to be back.

More like this
All Of Doja Cat’s Wildest Paris Couture Week Looks
By Dominique Norman
Looking Back At Kylie Jenner's Best Fashion Week Looks
By Allie Fasanella
30 Of Kendall Jenner’s Best Runway Looks To Date
By Dominique Norman
12 Red-Hot Valentine's Day Outfit Ideas Perfect For The Holiday Of Love
By Dominique Norman and Kelsey Stiegman
Get Even More From Bustle — Sign Up For The Newsletter
From hair trends to relationship advice, our daily newsletter has everything you need to sound like a person who’s on TikTok, even if you aren’t.