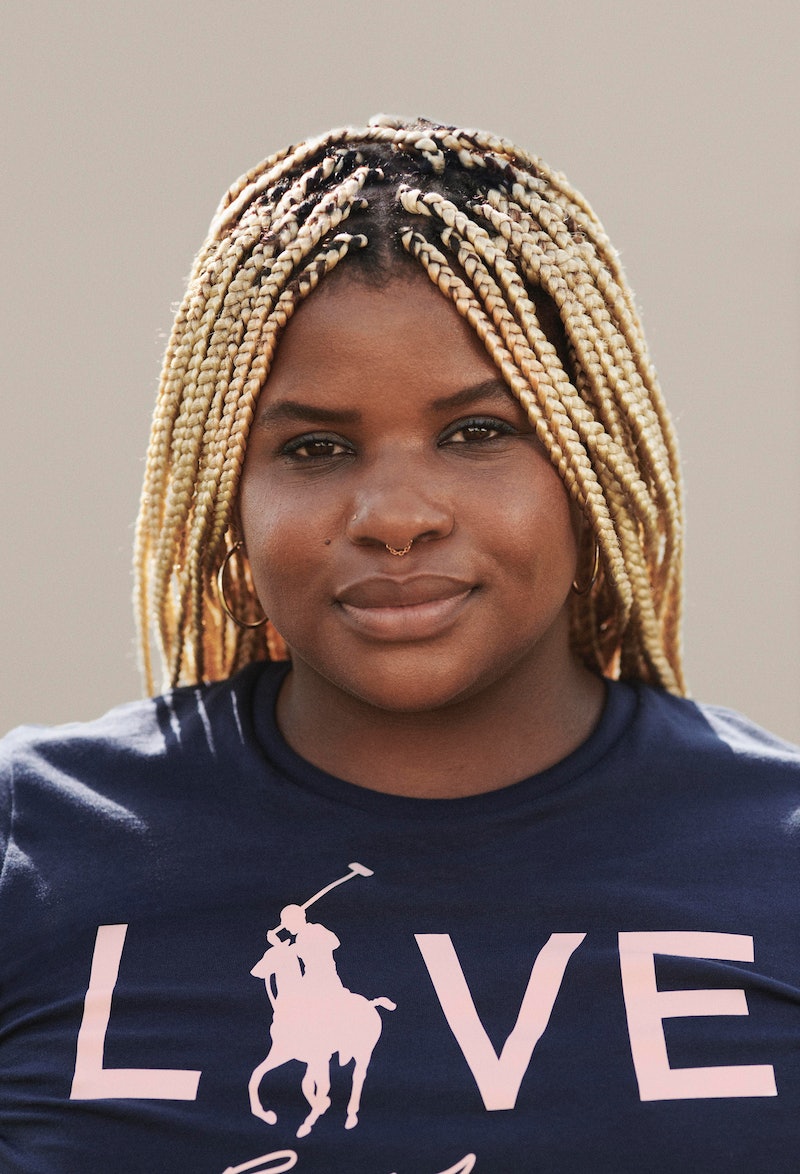 “The biggest misconception is that we somehow have low self-esteem if we’ve had any sort of mastectomy,” Hart tells Bustle. “There is the assumption that every breast cancer survivor is a woman, and now your womanhood is taken away because you’ve had a double mastectomy. That is just silly — that is so not true for so many people. They’re just happy that cancer is out of their body.”

Hart was diagnosed with breast cancer in her late twenties. And she is quick to point out that youth and health didn't stop her from contracting the disease.

“When I was 28, I was like, ‘Nothing’s going to happen to me at this age, I’m healthy, I’m fun,’” she shares. “At the time I was diagnosed, I was doing yoga five times a week. I ate hella vegetables. I would drink water. I did all the things that medicine — and I would say fatphobia — says that you need to be doing to stay healthy. And none of that mattered. That didn’t stop me from getting breast cancer.”

It was May 2014, and Hart was engaged to be married that September. She had already selected her dress. All the details for her big day were coming together.

"There is the assumption that every breast cancer survivor is a woman, and your womanhood is taken away because you’ve had a double mastectomy. That is just silly."

“I had long dreadlocks that I loved,” she recalls. “All of that began to look very different. I had to take a semester off grad school. I got married on a full round of chemotherapy, and I was completely bald.”

Although she still got to wear the dress she originally chose, alterations were needed to accommodate her changing body. “I went to my dress fittings with a drain, which is essentially a tube of your blood out of your body,” she shares. “The seamstress was great, but it was just uncomfortable.”

Hart underwent a double mastectomy in June that year. She had tissue expanders in her chest when she got married in September. It was another unforeseen adjustment.

“They were not the breasts I had when I did the first dress fitting,” she says. “I did chemotherapy for a year, and the day after my 30th birthday was my last chemo treatment.”

Established in 2000, Pink Pony’s mission is to reduce disparities in cancer care, lead the fight to find a cure, and help ensure that access to quality treatment is available to everyone at an earlier and more treatable stage.

During her diagnosis and treatment, Hart became acutely aware of the disparities faced by people in marginalized communities battling cancer. “When I was getting chemotherapy, the nurses would kind of stare at my partner and I,” she recalls. “This was in New York. It was like they’d never seen a queer couple anywhere.”

Hart also worked full time through chemotherapy, and she wasn’t able to take a recovery period after her surgery. “The average time after a double mastectomy to be at home resting is like a month,” she says. “I talked to other breast cancer survivors, and they told me they took six months off after their double mastectomies. I went back to work after two weeks. I look back and have no idea how the hell I did that. And today, six years later, I’m still healing from that.”

It was important for Hart to be involved with the Pink Pony Initiative so she could help highlight the diversity of breast cancer survivors. When people think of this demographic, she explains, one type of image usually comes to mind.

“There are definitely not enough queer, non-binary, and trans stories of breast cancer,” she says. “If you Google breast cancer right now, you’ll probably get Angelina Jolie and some white diagram of a breast that has a lump. If you look at a lot of the campaigns for breast cancer, everybody is a white, cisgender woman that lives in the suburbs and has three kids and a picket fence. That’s just not the case. We’re missing a lot of people.”

By telling her own story of survival, Hart is playing a key role in fighting for representation for all breast cancer survivors.

“Being diagnosed with breast cancer I started to see, ‘Wow, I’m missing a lot in my activism,’” she says. “I need to make sure that throughout what I’m teaching, that this work is accessible. As an able-bodied person, I just wasn’t thinking about that. We have to bring nuance to this conversation and talk about this in so many different ways, because it is harming people when we keep talking about it in the same way.”

More like this
Genius T.J.Maxx Shopping Hacks For Sales On (Almost) Everything
By Kelsey Stiegman
Bella Hadid's Flare Jeans Under A Dress Outfit Is So Nostalgic
By Allie Fasanella
These Are Kylie Jenner's Best Paris Fashion Week Looks... So Far
By Dominique Norman
10 Corsets That *Actually* Work For Big Boobs
By Bella Gerard
Get Even More From Bustle — Sign Up For The Newsletter