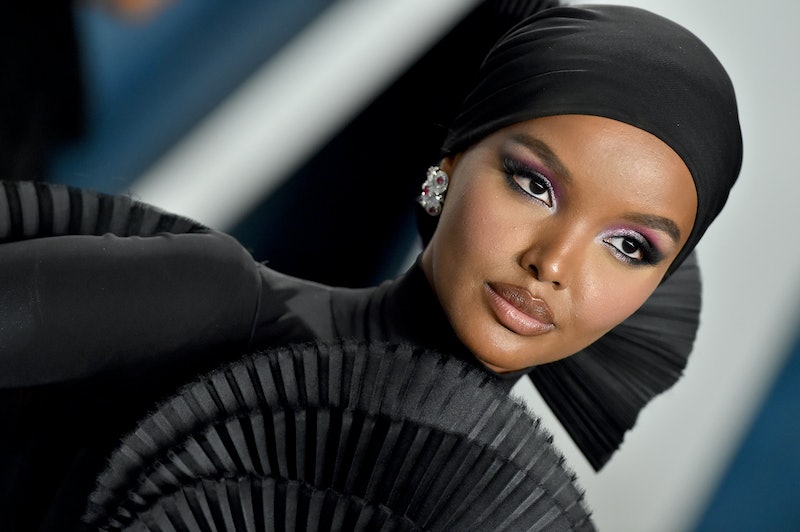 In November 2020, former model – and the first person to appear on the cover of American Vogue in a hijab – Halima Aden decided to leave the fashion industry after three years. In an Instagram post, Aden announced that she was leaving modelling behind after being realising she was being forced to compromise on her religious beliefs, in particular with reference to wearing her hijab. Now for the first time since, Aden has opened up about her decision to quit modelling in a new interview.

Speaking to the BBC, Aden shared the full story of how she became a model, and how she came to the decision to choose faith over fashion, explaining that the fashion industry was incompatible with her Muslim beliefs.

The 23 year old first rose to fame in 2016 after competing in her hijab in the Miss Minnesota USA pageant. Since then, she has appeared on the covers of American Vogue, Vogue Arabia, Elle and Allure, and walked for brands including MaxMara, Yeezy, and Fenty.

When Aden first signed with IMG (one of the biggest modelling agencies in the world) in 2017, she had a clause included in her contract that said she would never remove her hijab. Which ever way she was dressed, whatever the brand or campaign, keeping her hijab on for every job was non-negotiable. For her first campaign with Rihanna's Fenty Beauty, she wore her own plain black hijab that she had brought to set.

However, as Aden explained to BBC global religion reporter Sodaba Haidare, over her years in the industry, she found that was drifting into a “grey area” when it came to how her hijab was represented. She noticed her hijab was getting smaller and smaller on set, sometimes even being replaced by head coverings she would have ruled out at the start.

Back in November 2020, Aden announced her decision to leave the industry in a now-deleted Instagram post, which read “Looking back now, I did what I said I would never do. Which is compromise who I am in order to fit in." She referenced jobs in which brands had replaced her traditional hijab, instead covering her hair with a pair of jeans or ornamental objects, and shoots that used heavy makeup looks on her when she would have preferred a more restrained look that aligned with her modest principles.

"The pressure was getting unbearable, and I’m sad to say I went through a period of resenting the hijab," Aden wrote on Instagram. "Just remember they call it a 'hijab journey' for a reason and it is never too late to reinstate your boundaries."

Speaking to the BBC, Aden explained that she saw that other young, aspiring Muslim models were having even more difficulty working within the fashion industry and maintaining their religious practices. "These girls are following in my footsteps, and I have opened the door to the lion's mouth," she said to the BBC, explaining that she felt pressure to protect them.

Aden also explained her disappointment in not being able to spend religious holidays with family due to her increasingly demanding career. "In the first year of my career I was able to make it home for Eid and Ramadan but in the last three years, I was travelling. I was sometimes on six to seven flights a week. It just didn't pause," she says.

The COVID-19 pandemic, however, gave her a well-needed break. She was able to return home to St Cloud to spend time with her mother, where she had a breakthrough regarding the future of her career. “I was having anxiety thinking of 2021 because I loved staying at home with my family and seeing friends again,” she explained. "I'm grateful for this new chance that COVID gave me. We're all reflecting about our career paths and asking, 'Does it bring me genuine happiness, does it bring me joy?'"

More like this
Harry Styles’ Red Carpet Looks Have One Thing In Common
By El Hunt
Dr. Martens’ New Collab Reimagines A DM Classic
By Frances Stewart
Revolution’s 'Game Of Thrones' Collection Includes A Dragon Egg Blender
By Justine Knight
Everything You Need To Know About Ephemeral Tattoos
By El Hunt
Get The Very Best Of Bustle/UK