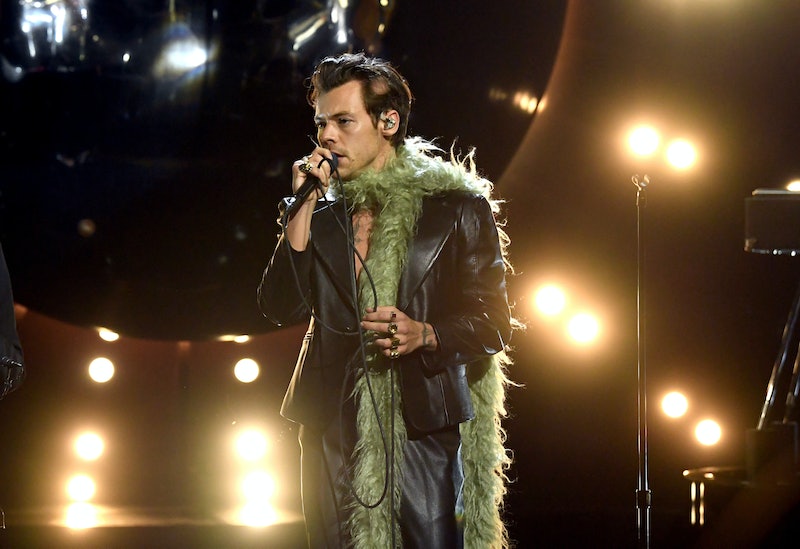 Harry Styles’ 2021 Grammys outfit stole the show as he hit the stage to perform his hit song “Watermelon Sugar” in his true kitschy fashion. For starters, he chose to perform shirtless, wearing a custom Gucci black leather suit that’s got his countless admirers feeling very hot and bothered.

As if the head-to-toe leather ensemble wasn’t spicy enough, Styles took things up a notch with an unexpected, quirky accessory: a lush green feather boa draped oh-so-perfectly over the striking suit. He completed his quintessential rockstar ensemble with heeled loafers, an assortment of chunky rings, and a cross necklace.

Styles was named a face of Gucci in 2019, and has starred in several campaigns for the fashion house’s menswear line. As the December 2020 cover star of Vogue — making history as the first man to cover the magazine solo — he wore a frilled blue and black lace Gucci gown.

At this year’s Grammys, the singer is nominated for several awards, including best pop solo performance, best pop vocal album, and best music video, all of which mark his first-ever Grammy nominations.

Regardless of whether he takes home a win, one fact remains undeniable: After debuting his leather-boa look, he’s solidified his place in the hearts of thirsty fans everywhere.