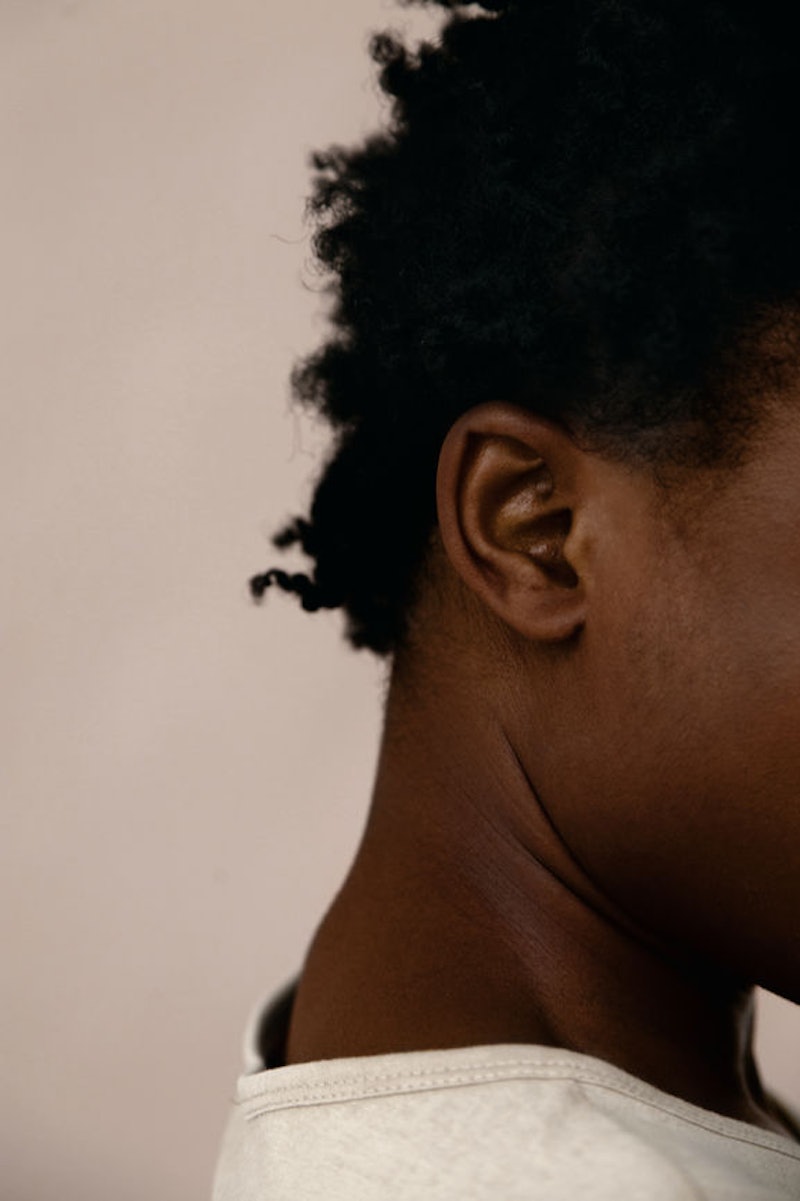 "Bad hair" is a phrase that has long plagued the black community, especially those who have 4C hair. The cruel term insinuates that there is something inherently wrong with afro-textured coils, which can influence those with kinky hair to develop feelings of disdain for their own natural texture.

While 4C hair has been seen as "bad," looser type 2 and 3 curls have long been praised as "good hair," and a curl type those with kinkier tresses should strive to achieve. This has naturally created a texture hierarchy, with an undoubted mental toll.

"There was a period in time that I hated my hair," Charlene Akuamoah, a stylist and one of the founders of fashion label broke & living, who has 4C hair, tells Bustle. "I thought it was so difficult to manage: It was rough, the curls were too tight, it didn't look 'presentable,' it was always dry, and I felt like I looked better with straight hair." The 30-year-old explains that many of those self-hating thoughts came as a result of relaxing her hair for over 20 years — and thus only ever seeing her hair straightened for the majority of her life. "I [thought] that my hair had to be tamed," she adds.

But the idea that certain natural hair textures are somehow better than others has no real, scientific basis, Dr. Afiya Mbilishaka, PhD, an assistant professor of psychology at the University of the District of Columbia who is an expert in African cultural rituals and natural hair, tells Bustle. And words like "bad" or "rough" being ascribed to 4C hair blatantly opposes the beliefs many pre-colonial African societies had regarding highly textured hair. In fact, the main reason negative perceptions about kinky hair exist in the black community today is because it's what we have been conditioned to believe after centuries of trauma, she notes.

Before the forced migration of African people began during the 15th century, the idea that 4C hair was somehow difficult to manage was non-existent. In traditional African societies, communities with 4C hair were equipped with the proper tools and methods to take care of their coils. "We had a lot of rituals connected to hair, that could actually prevent that type of hair texture from breaking," Mbilishaka explains. These societies would sometimes use ingredients like ochre clay and butter fats to preserve the hair and retain length — much like the methods the Himba people of Namibia still practice today.

One tool that was (and still is) crucial for the maintenance of Afro hair: the comb. These societies built specialized wide-tooth combs, often carved from wood, that were specifically designed to gently detangle and part tightly coiled hair, according to Mbilishaka. In 2013, the Fitzwilliam Museum in Cambridge, UK, launched its Origins of the Afro Comb project, in which historians traced over 5,000 years of the hair tool's history dating back to ancient Egypt. Researchers found that the comb was used not only for hair maintenance, but also to symbolize status and religious beliefs. According to the museum, the handles of combs were decorated with "objects of status, such as the headrest, human figures, and motifs that reference nature and the traditional spiritual world."

Ironically enough, Afro-textured strands were also believed to be linked to the heavens, Mbilishaka explains. "4C hair was actually used as more of an art form," she shares. "Our hair is the highest point on our entire body, and therefore considered most connected to the divine. In some degree our hair was supposed to grow up ... as a way to connect to the spiritual world."

But these sacred traditions and hair care practices were largely lost during the time of the Transatlantic Slave Trade starting in the 15th century. Tools like the wooden wide-tooth comb, along with the butters and muds used for hair care, all became inaccessible during this time — forcing enslaved African people to lose a piece of their identity.

"Part of the dehumanizing process that European slave masters and catchers did was to change the meaning and significance of tightly coiled hair," Mbilishaka notes. "They labelled the hair as fur or wool as a way to associate black [people] with animals, [using this as a] rationale as to why they should be treated as slaves." As a result, enslaved people only had access to animal grooming equipment, like horse brushes and wool-cutting instruments, to take care of their hair.

It was these types of conditioning methods that laid the foundation for the hair texture hierarchy to be socially constructed. Research has shown that people with coiled hair would be treated as subhuman, while those with looser curls — who were sometimes mixed-race — were typically deemed as house slaves. "The people who were in the kitchens, butlering, or nannying of the children [inside the home], were often times the descendants of those specific families, the white families," Mbilishaka says. "The indication of having some whiteness was associated with a looser curl."

In addition, these people "wore better clothing and ate better foods," she adds, while "people who lived further out on the plantation, who tended to be darker in skin color and have kinkier hair texture, ate worse foods and dressed in poorer clothes."

In 1769, when the law of coartación was established, black people in Louisiana had the option to purchase their own freedom. This granted former slaves in the state the autonomy to dress and once again style their hair in any way of their choosing — if they had the means. Free black women, specifically, would often wear feathers or jewels in their hair during this time. However in 1786, the Tignon Law was established by Don Estevan Miro, the governor of Louisiana at the time, prohibiting "Creole women of color from displaying 'excessive attention to dress' in the streets of New Orleans."

"That actually forbid black women with highly textured hair from showing their hair in public," Mbilishaka explains, as black women were legally forced to wear a head scarf as a way to signify they were part of the slave class. "Everything was considered illegal when it came to an African aesthetic," she says, "but considering how stylish African people are, we made the most ornate head wraps and styles."

The perpetuation of these concepts throughout centuries — from the creation of a hair hierarchy, to black women having to cover their hair in public — birthed the notion within the black community that proximity to whiteness, not traditional black features, was the benchmark for beauty and higher status in society.

Even after slavery was formally abolished in 1865, frivolous tests like "the comb test" were used in the U.S. to somehow imply that 4C, kinky hair was not socially acceptable. "An organization or institution, like a sorority or a church, would hang a comb outside of its door, indicating that if your hair could be easily combed with [a fine] comb, you could join," Mbilishaka explains. "But if your hair would have gotten stuck in that comb, then you could not enter." Similarly, in South Africa during Apartheid, people of color were forced to participate in "the pencil test," to see if they could hold a pencil in their hair while they shook their head. If the pencil dropped to the floor, the person would be classified as white, therefore granting them access into "white only" buildings. However, if the pencil remained in the hair, they were forbidden from accessing those same privileges.

While some arbitrary rules — like the deployment of the "comb test" — have faded away over the 19th and 20th centuries, that doesn't mean hair discrimination has. And even within the black community today, the notion that wearing kinky hair is somehow shameful has still lingered on.

For example, in May 2012, when rapper Lil' Mama posted a photo of her natural, kinky hair to Twitter, she was taunted by trolls. "I posted the picture of my hair and people were like, ‘Oh my God, you look like a shocked slave!'" she said to Christina Brown in an interview for Brown's "Love Brown Sugar" blog at the time. "I didn’t get one comment from a white person about my hair. All of them came from the sisters."

The type of behavior Lil' Mama endured can be attributed to "Post-Traumatic Slave Syndrome," according to Mbilishaka. The term, coined in 2005 by Dr. Joy DuGruy, PhD, a internationally renowned researcher and educator racism and trauma, is defined as "a consequence of multigenerational oppression of Africans and their descendants resulting from centuries of chattel slavery. A form of slavery which was predicated on the belief that African Americans were inherently [or] genetically inferior to whites."

"For black women in particular, this is a major way that racism enters our mind because we are compared to an ideal [white] beauty standard that is unrealistic," Mbilishaka says.

And despite the contemporary natural hair movement surging today in popularity through social media, the black community has still has a long way to go in moving past texture discrimination. "Just like with other rejections we experience, we tend to internalize them, and feel like something is wrong with us," Mbilishaka explains, adding that these comments hurt more deeply if it is coming from another black person. "Really, it’s just simply a projection of a societal criteria that is made up. One hair texture is not better than any other hair texture."

But even with centuries of oppressive social conditioning, Mbilishaka is hopeful that the black community can re-connect to its roots and begin to celebrate all hair textures, especially 4C. But in order to do so, it's important to think critically about our history when talking about this hair type, she says, and that means being thoughtful of why curls have been divided into "good" and "bad" categories, and letting go of any negative, oppressive language to describe 4C hair, like "unmanageable."

And for anyone who is still struggling to embrace their coils, Mbilishaka advises simply spending more time working with your locks. "Really learn your hair and do not try to copy other people’s style," she says. "Study your hair and discover all the different things it can do, rather than what it can’t do."