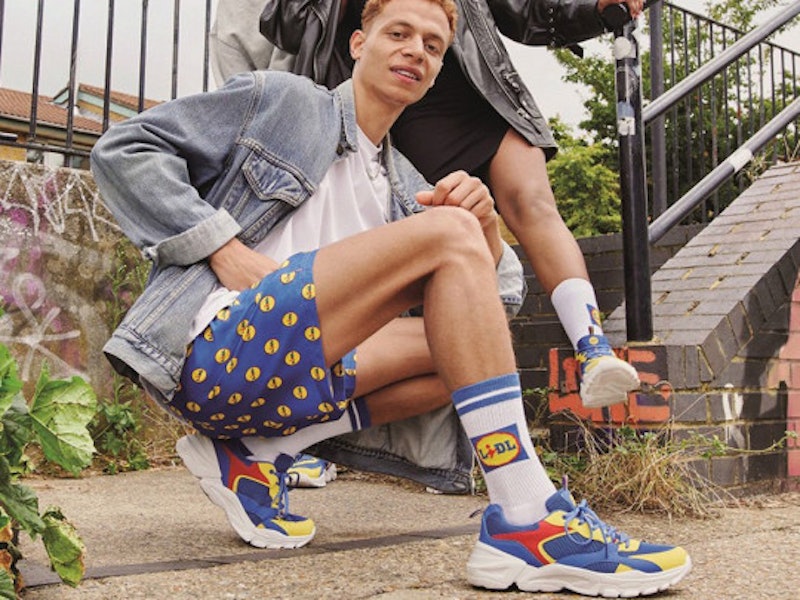 Forget Yeezys, Balenciagas, and the rest. UK sneakerheads are currently going wild for a pair of Lidl’s own-brand trainers, costing a mere £12.99. Seriously.

The supermarket sneakers come in Lidl’s unmistakable bright blue and yellow brand colours, complete with the chain’s logo, and fashionistas have been proudly reppin’ the discount chain on Instagram and beyond. The Lidl merch was available to buy in the UK from September 16, but how exactly can you get your hands on Lidl’s trainers?

As it currently stands, you may find it difficult to pick up a pair during your weekly shop.

The trainers dropped as part of the supermarket’s LidlByLidl collection (which included must-have matching socks) and, like with any coveted trainer release, the shoes were quickly snapped off the shelves, proving even more popular than the Lidl bakery.

In fact, one shopper admitted to “camping outside” Lidl in Holloway the night before they were released.

While you can’t buy a pair of the trainers via an online Lidl store (c’mon Lidl!) the trainers have been popping up on eBay triple their original price — I even spotted a pair going for the eye-watering sum of £500. Over on Etsy, things are a little more affordable, with pairs going for around £50 to £100.

For now, it seems like eBay and Etsy are the only two options for those keen to get their hands on a pair as Lidl hasn’t yet confirmed whether they will be restocking the trainers in local stores. However, given their unexpected popularity, there’s hope for another drop sometime this autumn.

Until then, lucky shoppers have been wearing their Lidl trainers proudly. As one fan shared to Twitter: “This has got to be the best own-brand supermarket fashion range we've ever seen. No? #lidlbylidl”