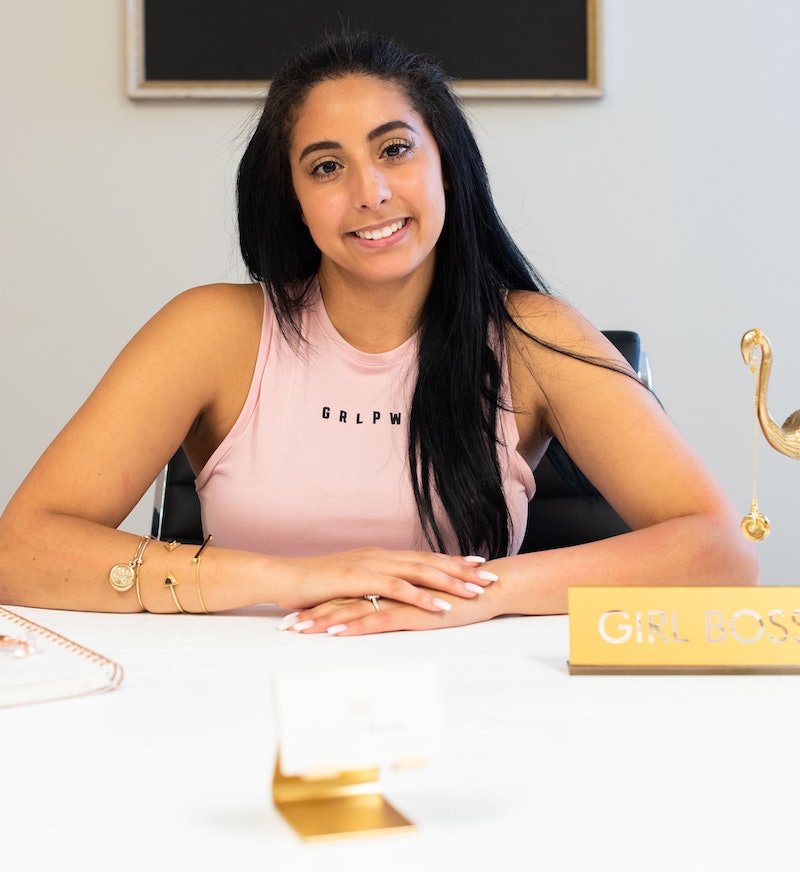 In 2015, Rajia Abdelaziz was leaving an event and walking to her car in the parking lot. At first, she thought she should maybe ask somebody to accompany her.

“And then I said, ‘I’m being paranoid,’” Abdelaziz tells Bustle. “Well, you know what? I should have listened to my instincts and gut feelings.”

As she was walking, a car full of men drove by. They rolled down the window and began yelling “super inappropriate comments,” Abdelaziz says. Thankfully, she was close enough to her car that she ran, got in, and locked the doors. But in that moment, everything changed.

“Too many times as women, we blame ourselves for being paranoid when, in actuality, things like this happen every single day,” she says. “I promised myself I was going to buy something not only for me, but for every woman I cared about to protect her.”

The only issue? Every safety tech gadget, she says, was “a big ugly panic button” that was impractical and far from discreet. That’s when Abdelaziz, who was studying to be an engineer at the University of Massachusetts Lowell, decided to take matters into her own hands.

She came up with the concept for a line of wearable items that can alert authorities and loved ones whenever you feel in danger. What started as a class project quickly became a full-fledged business called Invisawear.

The now 26-year-old entrepreneur designs bracelets, necklaces, scrunchies, and keychains with a built-in button. When double-pressed, the button sends a text message to up to five pre-selected emergency contacts.

The text notifies the emergency contacts that a user is requesting help and contains a link to their location. The jewelry also offers an optional contact 911 feature. In addition, Invisawear’s wearable personal safety devices are powered by the security company ADT.

“When we were first designing the product, myself and my business partner Ray, we’re both engineers, so we wanted to add a lot of bells and whistles,” she says.

They thought about adding a vibration motor and an LED light. But when they started talking to customers, all customers cared about was the size of the product and the overall aesthetic.

“People wanted something small and visually appealing,” Abdelaziz says. “They wanted a variety of styles and they wanted to be able to take it off of whatever it’s currently on and swap it into different things. For example, all of our necklaces have a clasp on it where you can take the button charm off and you can put it into a fitness band.”

Looking to the future, Abdelaziz hopes to be at the forefront of the wearable tech movement. She’d eventually like to branch into other categories, including apparel. “One day, we would love to include it in wearable items like jackets,” she says.

But ultimately, the end goal of the brand is to become a deterrent for attackers — something that will make them think twice about harassing or assaulting someone.

“It’s really sad, but statistics show that one in five women are sexually assaulted at some point in her lifetime,” Abdelaziz says. “We want our devices to scare attackers from even trying to harm anyone. We want them, before committing a crime, to wonder, ‘Does she have a scrunchie? Does she have a necklace? Does she have a bracelet?’ We just want to give people peace of mind.”

Rose Gold Necklace
Invisawear
Black Scrunchie
Invisawear
Gold LimeLife Keychain
Invisawear
Nude Athletic Band
Invisawear
Size XS-L
Gold Expandable Bracelet - This Bracelet Could Save Your Life™
Invisawear
More like this
Spring 2023's Hottest Shoe Trends Include Moto Boots, UGG Minis, & More
By Allie Fasanella
12 Red-Hot Valentine's Day Outfits Perfect For The Holiday Of Love
By Dominique Norman and Kelsey Stiegman
13 Exciting Spring Fashion Trends That Feel So Fresh
By Allie Fasanella
25 Cute Ski Outfits That Look Hot & Keep Away The Cold
By Bella Gerard
Get Even More From Bustle — Sign Up For The Newsletter
From hair trends to relationship advice, our daily newsletter has everything you need to sound like a person who’s on TikTok, even if you aren’t.