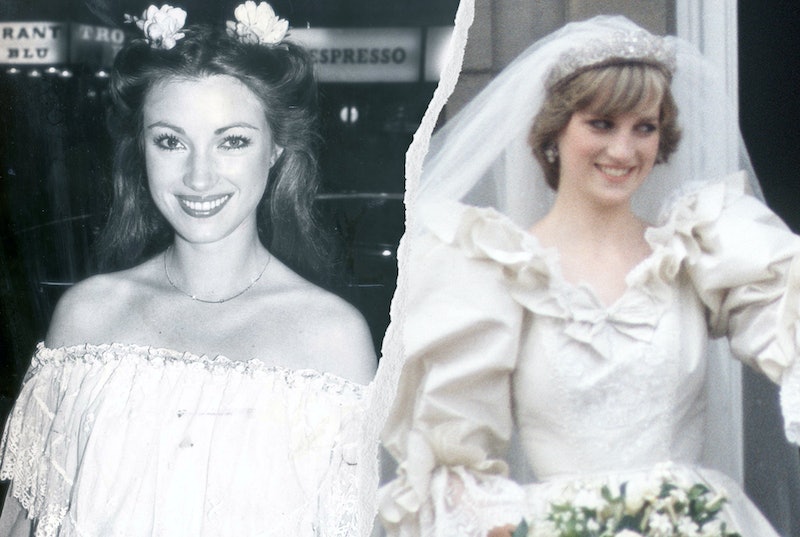 Royal wedding dresses will always be viewed as some of the most iconic gowns in British history. You've got Kate Middleton's stunning lace dress by Sarah Burton, Meghan Markle's understated boat neck design by Clare Waight Keller, and most recently, Princess Eugenie's Zac Posen gown. And how could we forget Princess Diana's huge gown designed by David and Elizabeth Emanuel, which inspired a generation of bridal wear?! It was an iconic dress for sure, and now it appears actor Jane Seymour had some involvement in Princess Diana's wedding dress – in the most unexpected way.

During an appearance on Susannah Constantine's My Wardrobe Malfunction podcast on February 4, Seymour revealed that she may have been the reason Diana decided to hire the Emanuels to design her wedding dress.

The actor explained that she had decided to wear an Emanuels design to the premiere of her film The Four Feathers in 1978 – an even that was attended by the Queen.

"[David and Elizabeth Emanuel, the designers] let me borrow this beautiful, beautiful off-the-shoulder white dress and I wore it," the actor told Constantine. "The joke in our family was that the Queen liked the dress and turned to Prince Charles, 'We've found the frock, go find the girl!'"

Princess Diana's wedding dress was made from ivory silk taffeta and antique lace, and most memorably had a 25-foot long train with a 153-yard tulle veil. The dress was valued at £151,000 in 2019, and currently in the private possession of Prince Harry and Prince William, after being on display for some time first.

Seymour later claimed that she was a "secret muse" for the designers, and that she has plenty of Diana-like looks in her wardrobe. "I have in my closet the replicas — I mean the other dresses that Diana would have had," she shared. "I had 'the other one' of a lot of her dresses. So, I've never parted with them."

More like this
Harry Styles’ Red Carpet Looks Have One Thing In Common
By El Hunt
Dr. Martens’ New Collab Reimagines A DM Classic
By Frances Stewart
Pandora’s New Collection Is A Real Work Of Art
By El Hunt
How To Shop Your Favourite Celebrities’ Closets On Depop
By Darshita Goyal
Get The Very Best Of Bustle/UK