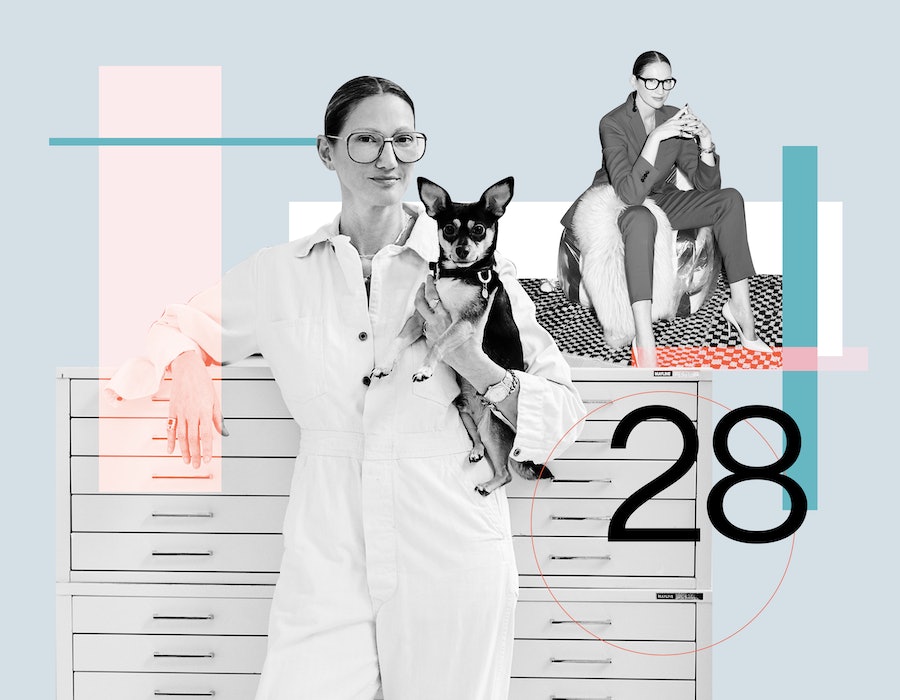 In Bustle’s Q&A series 28, successful women describe exactly what their lives looked like when they were 28 — what they wore, where they worked, what stressed them out most, and what, if anything, they would do differently. This time, fashion mogul Jenna Lyons discusses how she launched her career as a retail executive in the late ‘90s.

If you’re even remotely interested in fashion, Jenna Lyons needs no introduction. As the former creative director and president of J.Crew — and once crowned “the woman who dresses America” by The New York Times — Lyons’ vision for the brand helped turn it into a billion-dollar business, a formidable tastemaker with massive reach, and an undisputed personal favorite of the Obamas.

In 2017, however, Lyons left the company to which she’d dedicated more than half her life, partly due to declining sales and a changing retail landscape. It was a hazy time filled with uncertainty.

“The most challenging part was I worked at the same company for 27 years,” Lyons, 51, tells Bustle. “It was one of those things where I didn’t have a job and didn’t know what I was going to do. I figured I’d just take calls from anyone or anything coming my way.”

One of those calls ultimately led to Stylish with Jenna, the new show she’s starring in and executive producing for HBO Max premiering Dec. 3. Part documentary, part formatted competition, the series follows Lyons as she tackles design projects that will help define her future business, from renovating her friend’s classic Brooklyn townhouse to hosting mobile fashion makeovers. Along the way, she tests a group of creative associates all vying for a position within Lyons’ growing team.

It sounds delightfully entertaining, even if Lyons’ learning curve from fashion to TV was a bit steep. “The first day of shooting I had a total meltdown,” she says. “I realized I had never managed anything on that scale that had that level of complexity. I didn’t know how to maneuver and push the levers to get what I thought I wanted.”

It was a struggle she's encountered before, when she was working her way up the ladder at J.Crew. Here, she reflects on that time in her life, being underestimated in the workplace, and the lessons she’s learned along the way.

It was 1996. It was probably one of the hardest times in my career. It was so dark. I haven’t thought about it in a long time. We had a round robin of CEOs coming in trying to redirect. I was constantly trying to make the right choices and decisions. I was promoted to the head of women’s, but the boss who I had loved had been let go. I was trying to fill his shoes but had nowhere near the experience to do that.

In retrospect, I was a professional baby. I didn’t have the experience I needed. We learn so much in school and we’re taught this and that, but leadership and management skills are what make you successful. Because you can be the smartest person in the room, but if you can’t communicate to and motivate your team, you’re dead in the water.

You’re newly in this leadership position, and you’re a young woman — did you experience instances when you walked into a room and people underestimated you or didn’t take you seriously?

Oh, all the time. Sometimes I didn’t even know it in the moment. I will never forget being in meetings in Japan. The person with me was my junior but he was a man, and people in the meetings would not talk to me. They’d ask him, and he’d look at them and say, “You’ll have to ask her.” It was the most bizarre experience. It happened all the time. Listen, it still happens.

Literally no joke. I was at a doctor’s appointment not too long ago and [someone] said, “Oh you used to work at J.Crew.” The conversation was like, “What store did you work at?” I said, “I didn’t work at a store, I worked at the office.” He was like, “Oh, what did you do? Design?” I said, “Well I was the president and creative director. I oversaw J.Crew, Madewell, and Factory.” And he goes, “Oh, good for you.” Excuse me? “Good for you”? He never would have said that to a man.

What were your goals at 28, professionally and personally?

I was so afraid of being disappointed that I kept my aspirations pretty attainable. I didn’t want to feel like I had failed, so I really didn’t push myself. I was like, “If I can afford my own apartment, I will be so excited.” Like I thought that was amazing. And then that happened. I wanted to have a kid. Part of the reason I feel so lucky and grateful is because I’ve been very fortunate that everything has gone better than I expected. I mean I’ve had some very hard moments, but you appreciate the good and the bad.

For sure. What advice would you give to your 28-year-old self?

Oh my God, don’t go out with that boy who you met in the bar on the Lower East Side. He’s really bad news.

Uh-oh, why was he bad news?

Not the guy I ended up marrying. I mean, I was young. I didn’t understand how confidence and having my own thing was actually more attractive. I molded myself into what I thought people and boys wanted. That’s very common. I definitely dated guys who didn’t treat me that well. My expectations were very low. I made some poor choices along the way. I approached life always being afraid. It was a lot of time not enjoying the moment.

What would your 28-year-old self think about you now?

This is a hard question to answer. I certainly would have said, “I wish you would have figured out that you were gay younger. It might have been a lot easier.”

Don’t get me wrong, I loved my husband. We had a wonderful time when we were together. But I think if I had gone to like Smith College, my life would have been very different.

More like this
Dr. Martens’ New Collab Reimagines A DM Classic
By Frances Stewart
How To Wear A Bucket Hat Like Rihanna, Dua Lipa, & More
By Allie Fasanella
Harry Styles’ Red Carpet Looks Have One Thing In Common
By El Hunt
Everything You Need To Know About Ephemeral Tattoos
By El Hunt
Get Even More From Bustle — Sign Up For The Newsletter