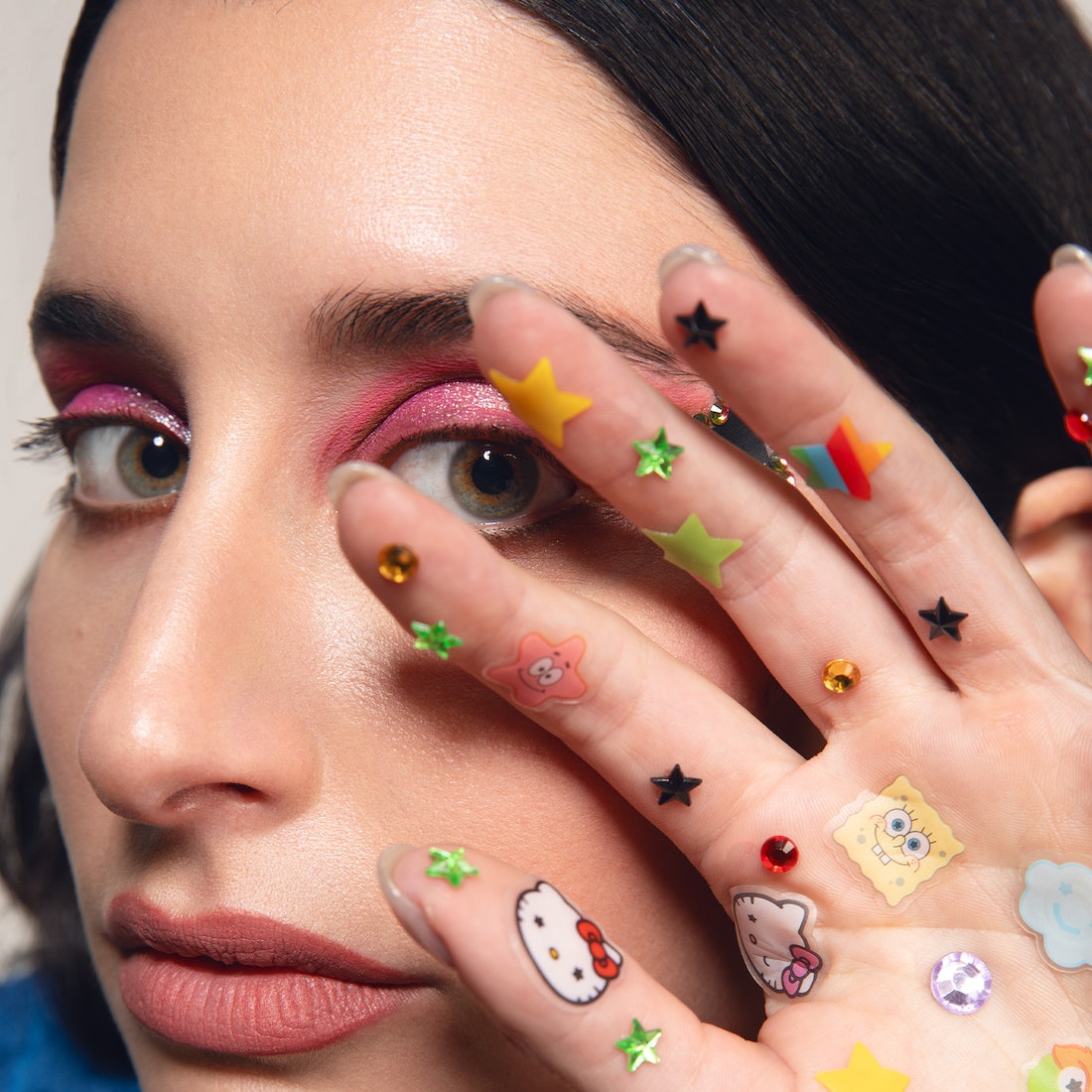 It goes down in Julie Schott’s DMs. It’s where the beauty entrepreneur met influencer Mia Khalifa, who shopped Schott’s closet on Insta story and then went on to star in one of her campaigns. Instagram is also how Schott reconnected with comedian Esther Povitsky, who is now an investor in two of Schott’s brands. And on a recent Thursday afternoon, it’s where Schott and I first connect. Sitting in the backseat of an Uber — on my way to meet her at San Vicente Bungalows, a members-only club in Los Angeles — I look down at my phone to find the Starface pimple patch founder now following me.

“I’m more comfortable connecting with people there than in person, because I’m such an introvert,” Schott tells me later. “I can’t go up to anyone who I don’t know at a party, but online I can.” Shyness also partly explains why, back in 2019, she decided to make the star-eyed smiley face “Big Yellow” the face of the Starface rather than her own visage. That, and a love of all things cute. “I’m a Hello Kitty adult,” she says.

The chronically online approach works for the people in Schott’s orbit. (“An email is disgusting. It's like, ‘Are you my grandfather?’ No thank you. DM me,” says Povitsky. “What I would say of my relationship with Julie Schott is that we’re mostly Instagram friends, but that’s still a f*cking friendship, you know?”) But it’s surprising coming from a luminary of the skincare world. Many beauty startup founders serve as CEO and model, and even more offer themselves up as brand proxies on panels, social media, and at pop-ups. Plus, when Schott founded Starface in 2019 with Brian Bordainick, she was already in the public eye. She’d been the Beauty Director of Elle.com, representing the brand at Fashion Week and on YouTube, trying cortisone shots, taking yoga clothes from day to night, and creating kitchen pantry-inspired beauty looks.

This was during the dawn of the editor-as-influencer, when it suddenly no longer seemed good enough to write about shiny, skinny it girls — to really excel, you had to become one as well. “I started interning at these magazines and sites when I was a teenager, and it was totally affirmed that you were going to be rewarded for being thin. Bodies were commented on,” she says. Schott, who is now 34, tells me this body commentary — both the insidious type ingrained in women’s media and the louder variety of anonymous social media trolls — contributed to Schott burning out on media, quitting her job, moving to Los Angeles, and launching Starface.

Since its founding, Starface has sold more than 77 million yellow Hydro-Stars, which translates to 49 Hydro-Stars sold every minute in the last three years. Justin Bieber and Florence Pugh are known fans. Starface didn’t invent the zit sticker — hydrocolloid patches, in disappearing nude colors, have been used to treat wounds since the 1980s. But its ingeniously visible designs transformed them into a cute, shame-free and social media-friendly way of covering and healing a pimple.

“[Acne is an] experience that you start having when you’re as young as ten sometimes,” Schott says. “So let’s say you’re 12, like, ‘I feel self-conscious, I don’t even want to go to school.’ It starts to impact your daily life.” Our server interrupts to tell Schott her plaid dress is making her look straight out of the ’90s cult classic The Craft. Schott also wears a sprinkling of black Hydro-Stars, one dotting the corner of her eye, another on her collarbone.

“The goal is to just immediately make you feel better,” Schott says of the brand’s genesis. “Because with skin care, you have to wait [to see results]. But I want to feel comfortable now.”

Given Schott’s attention to the adolescent psyche, it might not come as a surprise to learn she had a tough time at high school in Westport, Connecticut, where her family moved from London in the ninth grade. “At one point I gained quite a bit of weight and I just remember these older girls were basically like, ‘You’re a slut, you’re British, and you’re fat,” she says. “I was very slut-shamed and [my best friend and I] were called lesbians. Back then, that was derogatory.”

After graduation, Schott enrolled at Pratt where she supplemented her courses with internships at magazines like Teen Vogue and Elle Accessories. She worked as an assistant editor at xoJane, the personal essay-driven website run by veteran editor Jane Pratt, under “enfant terrible” beauty editor Cat Marnell. In Marnell’s New York Times bestselling memoir, How To Murder Your Life, she wrote that she “demanded Jane hire Julie Schott, my gorgeous, emaciated, stylish former intern from Lucky.”

“I remember how important [being thin] was,” Schott tells me. “It wasn’t just important in that book. Can you imagine being in the workplace now and having someone you report to even mentioning your body?” At the same time, Schott’s first-person beauty adventures were quickly making her a rising star of women’s media. “Everything was through the lens of a personal essay. ‘I tried this diet,’ ‘I tried this workout,’” she says, referring to past stories that had her exercising with wine bottles or testing out a “topknot facelift.” “You write those stories enough times and it’s not a story anymore. That’s your lifestyle, that’s just who you are.”

Schott is sensitive and soft-spoken, a stark contrast to the unabashed hot girl Instagram persona that I admired from afar as a younger staffer of a rival publication. Back then, her downtown Manhattan, fashion scene-adjacent life, and engagement to her now-ex, Fresh Off the Boat author Eddie Huang, seemed to make her the prototypical editor-influencer. “It’s funny because we’re writers and curators and cultural commentators, but [appearance] mattered, almost like you’re an actress or something,” she says. “I didn't really think about it. It was such early days of [influencing]. And a lot of it was really fun.”

‘I don't think you're ever too old to [enter recovery]. I'm really happy I did it.’

Yet for all the fun Schott was having, commodifying herself also took its toll. By 2018, she was ready to murder her own life. She left Elle.com, moved to Los Angeles, and tried her hand at influencing to pay the bills. But after a failed attempt at doing sponcon for a gummy vitamin brand — “They were just like, ‘Yeah, it’s not working. It’s not… good,’” she recalls — Schott began putting her efforts into launching Starface. A year into working on the brand, she sought treatment for an eating disorder.

“I go to a recovery group, it’s called a process group. There’s five or six individuals in that group, and being able to connect with other individuals with similar lived experience has been one of the most meaningful things for me,” she says. She also credits the Rise Up + Recover app, where she logs her meals and coping skills as part of her process. “I remember reading this New York Times article about diet culture talking about, ‘I almost feel like it’s too late for me, but listen to me. It’s not too late for you.’ I felt that way about so many things that I had internalized but I don’t think you’re ever too old to [enter recovery]. I’m really happy I did it.”

Coming from most people, Schott’s mission of “fiercely protecting young people” by selling them a beauty product might ring false. But, given her fraught relationship to the beauty standards machinery, she comes across exceedingly thoughtful. It’s this mindfulness that drew Povitsky to her. “I’ve noticed through our FaceTime meetings that she really listens. She’s always thinking, she’s careful with her words, and she’s intelligent,” Povitsky says. “We all go for the charismatic leader, but I think the quiet thinker is the low-key way better version.”

Beauty editor Rachel Strugatz, who recently married Schott’s partner Bordainick, calls Julie “one of those people where, on the surface, they’re a little harder to get to know.” Strugatz, who is also shy, had Julie officiate her wedding ceremony. “It was in [mine and Brian’s] apartment with only our immediate family, and Julie wrote the most perfect speech that was really funny and weird but also meaningful and all the things.”

In the wake of Starface’s success, Schott’s interest in young people’s well-being has found new product applications: She and Bordainick launched Plus Body Wash, a zero-waste, dissolvable cleanser; Futurewise, a three product collection based around the TikTok-beloved practice of slugging; as well as Julie, their emergency contraceptive pill. When I bring up the expansion, Schott reminds me that a prospering business doesn’t equal personal happiness. She’s still working on herself, reading science journalist Catherine Price’s How to Break Up with Your Phone and The Power of Fun.

While she’s been intentional about social media for a while now — she no longer shares as much of her social life on Instagram, preferring to post memes or work wins — being selective about fun is a new priority. She wants to make sure she’s having authentically enjoyable experiences, not just convincing herself she is because what she’s doing is glamorous. “I mean, it can come across as pretty delusional and ungrateful to have those experiences and even to have a consistent job and be like, ‘I’m not happy,’” she says. “But you can’t fake it. You can tell.”

At Starface’s recent holiday party at a dive bar in New York City, Schott didn’t need to trick herself into having a good time. “The get-together started with trivia that was really 90% just pictures of people’s pets,” she says. Then they went to another bar, then to Korean barbecue, then karaoke. “The vibe and the energy at our party is that everyone wants to be together.” What more could your inner child ask for?