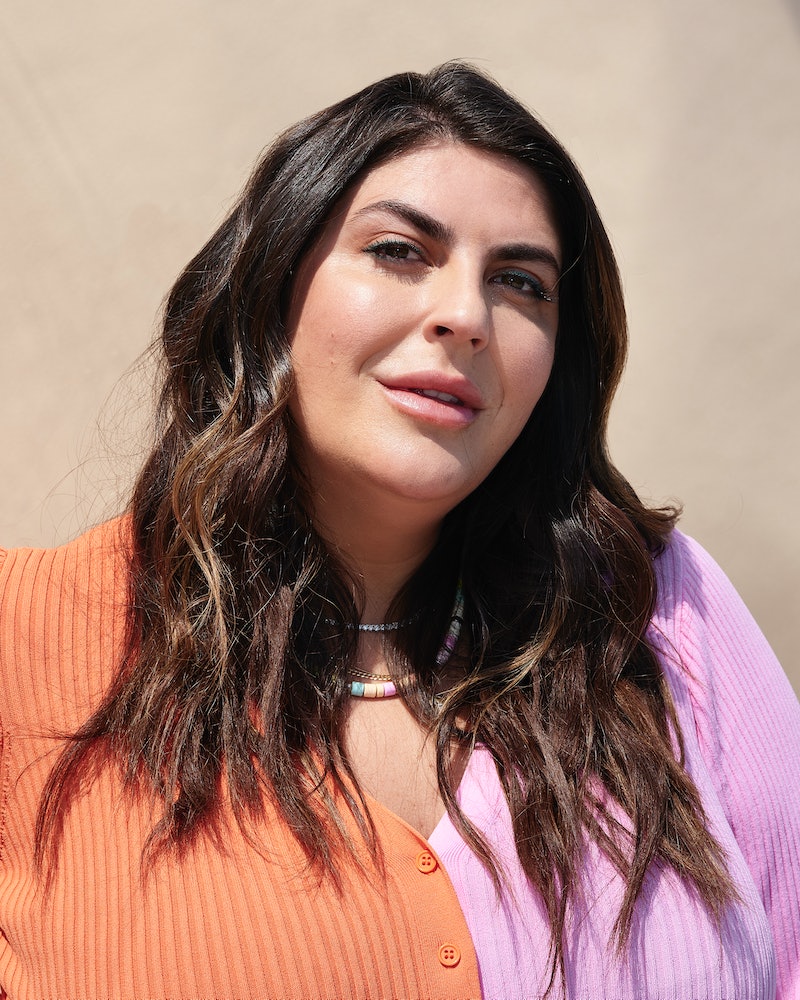 If you’re a woman whose belly isn’t completely flat — if you’re most women — you already know about the roll down. A pair of underwear that did look waist-skimming online becomes, on your own body, a failure of engineering, its waistband curling itself into a scroll that rests where leg meets hip. And, if you’re on Instagram, maybe you’ve even seen Katie Sturino, with her long brown hair and sexy, husky voice and nearly 600,000 followers, performing the roll test in a bra and underwear in her apartment — she lives in Manhattan and recently got a condo in Florida — by bending down from her waist to demonstrate whether various underwear styles will, well, roll down on her 5-foot-11-inch, size-18/20 body.

“It started because everything starts with something that happens to me, and because if it's happening to me, it's probably happening to other people,” Sturino, 40, says over breakfast (quiche and a side of spinach, if you need to know) at the NYC brasserie Balthazar. “When I'm doing a roundup of trying to show people how things fit, I don't think it's fair to just be like, ‘These are these underwear,’ or ‘This is how this dress is,’ because I think that a lot of times, clothes, especially on bigger bodies, get less comfortable with movement.”

The style influencer, founder of the body care line Megababe, and owner of internet-famous dogs is fearless in documenting the challenges of limited size range shopping. She posts photos of herself in dressing rooms, struggling to fit into a Zara dress or Abercrombie & Fitch jeans, with the hashtag #MakeMySize. But she also understands the power of unapologetically showing herself off. Using the hashtag #SuperSizeTheLook, she recreates celebrity outfits in inclusive sizes, and women of all sizes DM her to say she helped inspire them to go to the beach or buy bike shorts or a two-piece for the first time. (Though, a Meghan Markle edition landed her in The Daily Mail, which attracted a barrage of fatphobic comments from strangers.) She has a podcast called Boob Sweat (full disclosure: I’ve been on it) and her first book, Body Talk: How to Embrace Your Body and Start Living Your Best Life (Clarkson Potter, out May 25, with delightful illustrations by Monica Garwood), is a hybrid of memoir and workbook with the message that, as Sturino writes helpfully in all-caps, “THERE IS NOTHING AT ALL WRONG WITH YOU.” Her personal brand could be defined as shame-free, fun, cheerful, and no-nonsense.

Growing up in a tall family in suburban Wisconsin, Sturino tells me, “my body was just bigger.” She was a size 12 from the time she was a teenager. She was popular in school — she’s not sure if she’s allowed to admit that — and hung out with friends who were shorter and skinnier. “I had the hot friend group, but I was just probably not the hot friend in the friend group. I always felt like I was pursuing a boy and no boys were pursuing me. I thought if I wanted to have any romantic interactions, I was going to have to really put myself out there.”

During college at the University of Wisconsin, she wanted to work in fashion and applied to a bunch of internships without having any kind of connection. She ended up interning at Chanel for two summers, and then worked at Dolce & Gabbana as a PR assistant. By the time she was 25, she founded her own PR agency. “Working in fashion for 10 years, in public relations, I did feel like that was not healthy for my body image,” she says. This was when the Victoria’s Secret Fashion Show was something we were supposed to rally around and Ashley Graham had yet to be embraced by fashion brands that were not Lane Bryant.

And then she met someone through mutual friends at 26 and got married eight years later. He’s one of the early Instagram influencers, now a bit infamous, and a beverage entrepreneur, but she will only refer to him as her ex-husband. “It's my Google identifier, that's what I am, is an ex-wife, which I find to be deeply insulting and there's no way to change it,” she says. Their marriage lasted a year. “It was really hard. But at the same time, I am not one to stay where I wasn't wanted, and I must've had some sort of inkling in me that I would be OK, because after it was announced to me that that marriage was over, I moved on.”

“I called my family, anyone who would listen, and I'm like, ‘My dog is about to be famous, watch this space.”

She was still doing PR during her marriage but had two side hustles that were taking up more and more of her life. The first was her dog Toast, a rescued Cavalier King Charles Spaniel with a tongue permanently rolling out of her mouth, who became a social media sensation. It was not an accident; she made Toast’s fame happen. “I called my family, anyone who would listen, and I'm like, ‘My dog is about to be famous, watch this space,’” she says. “There were only two dogs — I'm still super momager about it, you can hear the Kris Kardashian in my voice — that were noticeable in the space, and it was Boo and Tuna. And I was like, ‘Here we f*cking come.’” Toast had hundreds of thousands of followers, a book deal, and her dog wedding appearing on The Real Housewives of New York City. “We actually filmed a ton, including so much dog rescue stuff, but they didn't air any of it. And then, I taped so many hours for Housewives that they did not use, in hopes of being a Housewife myself.” When Toast died in late 2017, the Today show wrote about it.

Sturino had also started a fashion blog called “The 12ish Style,” chronicling what she could find that worked for her body, then size 12ish. “I think that there's a certain type of charm that comes with not being perfect, and the internet actually took a big left turn right around the time that I started the blog. It stopped being about your breakfast spread and you were starting to be allowed to be, quote unquote, authentic, which is a word in every brand deck now.”

After her divorce, she gained around 60 pounds. By simply continuing to show her body in clothes online, she was identified as part of the growing world of online body positivity. She prefers the concept of body neutrality, that her body and her feelings about her body are not necessarily good or bad. She’d rather talk about something else. “I don't think that's because I'm hiding or burying anything,” she says. “I just think we have better things to talk about.”

“There's a certain type of charm that comes with not being perfect, and the internet took a big left turn right around the time that I started ‘The 12ish Style.’ You were starting to be allowed to be, quote unquote, authentic, which is a word in every brand deck now.”

While her fashion posts were going viral, Sturino was working on her beauty brand, Megababe, which launched in 2017 and sells an anti-friction stick called Thigh Rescue and an underarm mask called Happy Pits. At the time, there were a few products on the market for things like skin chafing or body sweat, but they had names like Fresh Balls and Anti Monkey Butt — yes, those are real — and she wanted to make ones that didn’t shame anyone and looked cute stashed in a bag. She loves holes in the market; she’s an ideas person. She won’t share products she wants to develop but will say she has a cemetery of abandoned ideas, including a photo book called Mirror Face and a trivia game she wanted to develop called Why Wisconsin.

Things have come together in the past couple of years. She stopped doing publicity for other people and works full-time on her various projects. She now has two dogs: Cheese and Crumb. And two years ago, she married John, a law school student she met on Bumble. “My type is like Tony Soprano. Hairy chest, don't care if you're bald,” she says. She did care that he wore jeggings but got over the fact that he said he was 6 feet tall and was in fact 5 feet, 9 inches tall. After they got married — Michael Bloomberg, the father of her friend Georgina Bloomberg, officiated — her now-husband changed his last name to Sturino. A few users were so incensed by this that they left nasty comments on a Valentine’s Day post.

Life as a professional influencer is a lot more complicated than swimsuit photo shoots, she says. “I just had a new assistant start and her biggest comment was, ‘I cannot believe how much goes into this.’” There are brand negotiations, schedules, writing, photographing, editing, revisions, scheduling, contracts, legal vetting, sound checks, tech checks, rehearsals, and, now, book publicity.

She wants Body Talk to be a book club book. Not purely to boost sales, but because she believes our friend groups unknowingly prop up our most toxic ideas about body image. “We sit there and we're like, ‘Do you want to go on a cleanse?,’ ‘I need to work out,’ ‘I feel so fat.’ And then, you [have] got your friends reinforcing that you're not fat, and this whole circle,” she says. “And so, I think reading this together as a group of women would actually be quite powerful.”

She is the first to admit her feelings about bodies are constantly evolving. For a recent social media campaign, Sturino recruited fellow plus-size influencer Nicolette Mason to help spotlight the lack of size inclusion in luxury fashion houses. The two were brainstorming what to call the hashtag, and “#Fatbabesinluxury” came up. Sturino found herself resistant to putting the word “fat” in the campaign hashtag. “I'm newer to the concept of fat being a word that you can say without negative stuff. And I also thought of a Chanel publicist seeing that. [Mason said,] ‘Well, you don't want to use the word fat, because you think you're going to make a publicist uncomfortable. Isn't that the point?’ And I'm like, ‘You're right. That is the point.’”

At the end of each chapter of Body Talk, there’s homework that aims to move the conversation that you currently have with yourself to a different place. But she doesn’t promise overnight self-love. Body Talk can't fix your life, because Sturino wants your life to be about more than body image. “There's no destination with size. You don't get anywhere with your body size and feel satisfied if you're not OK in your head,” she says. “I'm not going to cure your body image issues with this book, but what I am going to do is, hopefully, move you past where you are today.”