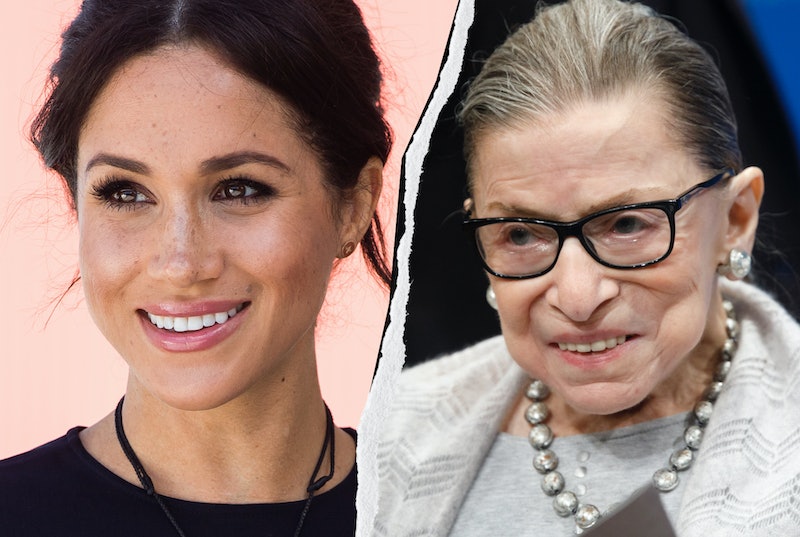 Though the Royal family traditionally does not involve themselves in politics, Meghan Markle and Prince Harry have taken to their post-Royal life in California with fervor, volunteering during the Covid-19 pandemic and urging Americans to get out and vote. And most recently, Meghan Markle paid tribute to Justice Ruth Bader Ginsberg with her shirt and face mask.

Markle and Prince Harry appeared on a podcast called Teenager Therapy, hosted by five seniors at a high school in Anaheim, California. In the image posted to social media to celebrate the taping, you can see Markle’s “R.B.G.” T-shirt, in honor of — you guessed it — the late Justice Ruth Bader Ginsberg. And the best part is, you can shop her T-shirt at Etsy for less than $25.

She kept the theme going strong, also wearing a black face mask embroidered in white with the words “when there are nine,” in reference to RBG's iconic quote about the moment there will be enough women sitting on the Supreme Court. That mask is also available to shop on Etsy for only $16.

This is certainly not the first time Markle voiced her support for Ginsberg. In fact, the day after the Justice’s death last month, Markle released a statement of support and remembrance. “With an incomparable and indelible legacy, Ruth Bader Ginsburg will forever be known as a woman of brilliance, a Justice of courage, and a human of deep conviction,” she said, adding, “She has been a true inspiration to me since I was a girl. Honor her, remember her, act for her.”

Shop her exact graphic shirt on Etsy for $25. It's great for layering under Fall knits like cardigans.

Etsy When There Are Nine Facemask
Etsy