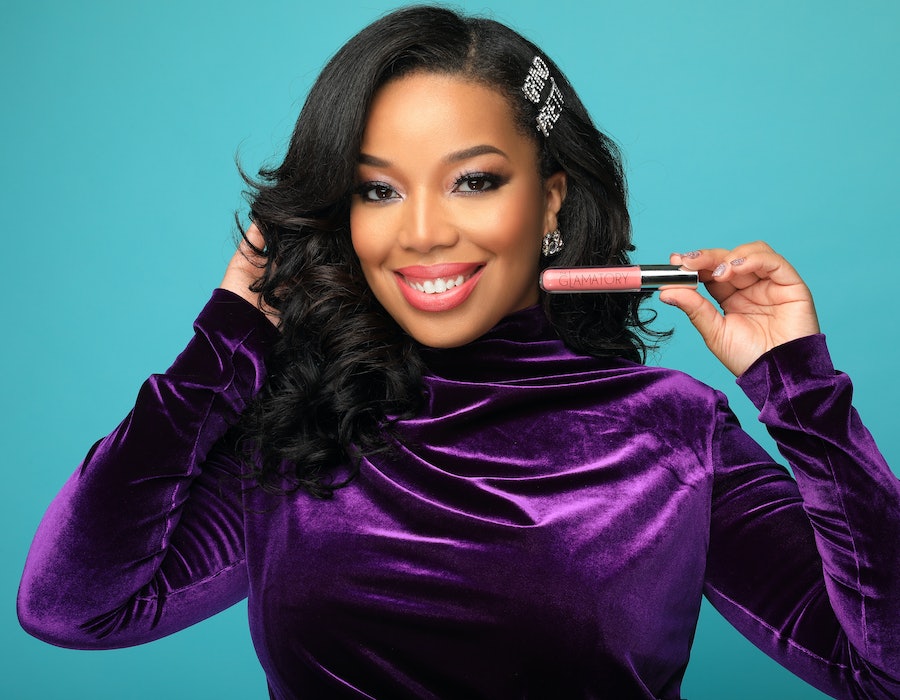 Mimi Johnson always loved art, but didn't know how to turn it into a career — until she took a trip to New York City. While doing her friend's makeup, it dawned on her that she could turn her love of eyeshadow and lipstick into a profession. So, in 2010, Johnson left her job in IT and began her life as a makeup artist, ultimately growing her client list to include celebrities and popular series like The Real Housewives of Atlanta. In 2014, after having her son two years earlier, Johnson took her beauty career to a new level: she opened a studio and retail space, The Glamatory, and simultaneously launched her own range of products.

Then COVID-19 hit. With the pandemic shuttering the doors of makeup artists' studios, Johnson had to make the tough decision to close her business. Johnson tells Bustle that shutting The Glamatory's doors in May was heartbreaking and that the decision was made, in part, due to a lack of business capital.

It's a familiar story for many Black-owned businesses, which face struggles to get approved for bank loans. Less than 47% are fully funded, and Black-owned firms are also more likely to get turned down for credit cards. "It seems like most of [getting capital] is being able to get into the right rooms," she says, "and as a Black woman, a lot of times, we’re not invited to those rooms. We have to try our best to create opportunities to get there — really just trying to break that glass ceiling."

Johnson says a majority of her funding came through crowdsourcing and friends and family who wanted to support her business. However, she's also noticed the way entrepreneurship is changing for women and Black women, specifically. "I see more Fortune 500 companies and popular brands creating funding opportunities for small Black businesses which is great," she acknowledges. "I also see more effort in diversity on brand campaigns and social media. Additionally, many brands were forced to take a stance on racial injustices and create more opportunities within their companies. This is all great." But Johnson acknowledges that more needs to be done.

It's a call-to-action that many of her peers took to heart. Despite closing The Glamatory, the makeup artist and entrepreneur just launched her first eyeshadow palette, Elements of Glam. She did so with the help of Black influencers, who reached out to her after she announced The Glamatory's closing. They offered to amplify her brand on their platforms, and also to promote the new palette for free. It was a shock to Johnson, but an experience she says was "so humbling and satisfying, and it made me feel a lot better." It's proof that Black entrepreneurs can and should harness their power to lift each other up, she says. "What they're doing is so powerful — showing sisterhood."

Johnson says the campaign also represents the importance of supporting Black-owned businesses. "We spend the most. We have to support each other and these businesses," she insists. "We already know the capital isn't in our favor. We're not receiving the venture capital. We're the lowest, and a lot of businesses were struggling before COVID."

Forming these support networks, like the influencers who have rallied around her, has been integral to Johnson's continued growth despite The Glamatory's physical closing. "It's always been about collaboration over competition," she notes. "For me, it's been saying if I've got a group of like-minded people that can support each other, we will grow together. That's always been the way I've moved, and the way I think."

And although Johnson says sales are important, she believes truly showing up for Black-owned businesses means more than spending money. "It's about showing that you like a brand," she explains. "Word of mouth holds so much more weight than advertising. A like is fine. A share is fine. A mention is fine."

"Support comes in so many ways."

More like this
Black-Owned Fragrance Brand Ourside Is Changing The Luxury Perfume Industry
By Audrey Noble
This Week’s New Makeup Releases & More Beauty Headlines
By Audrey Noble and Erin Stovall
Caliray's New Surfproof Setting Spray Is The Ultimate Skin Refresher
By Olivia Rose Rushing
The Best Beauty Looks Spotted At Paris Couture Week 2023
By Audrey Noble
Get Even More From Bustle — Sign Up For The Newsletter
From hair trends to relationship advice, our daily newsletter has everything you need to sound like a person who’s on TikTok, even if you aren’t.