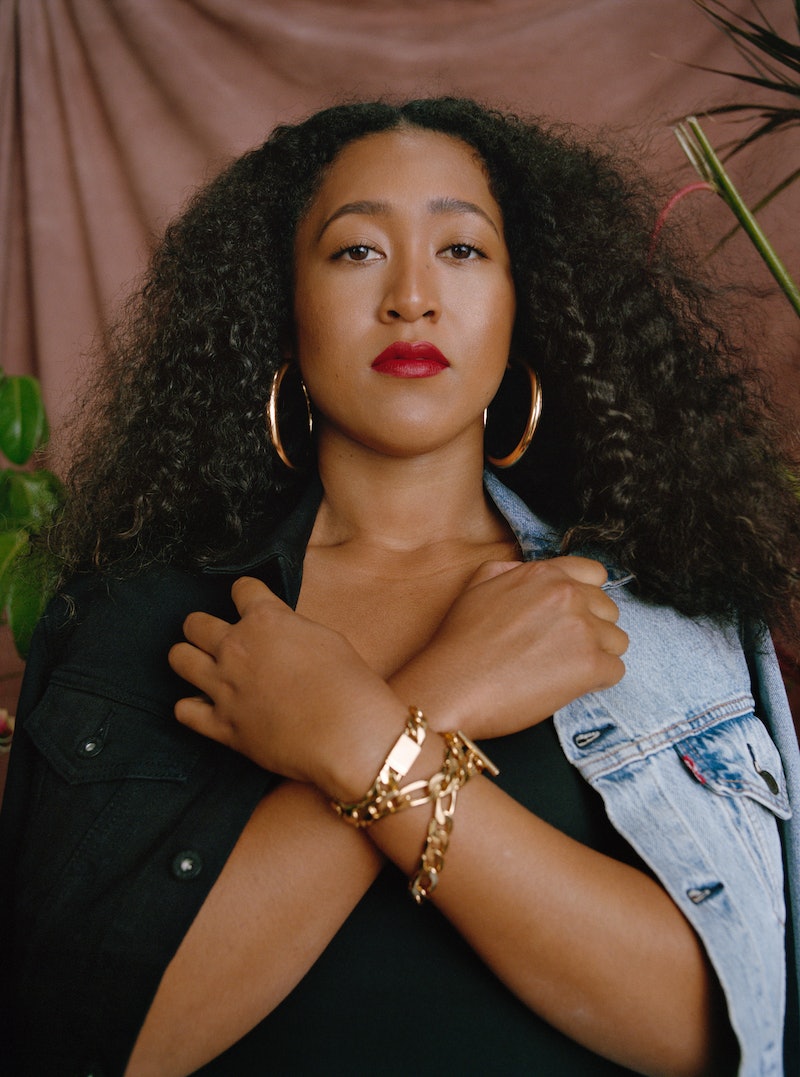 As the reigning US Open champion, Naomi Osaka has her pick of campaigns to participate in — and the 23-year-old Japanese and Haitian American tennis star is rightfully selective. For Levi's Beauty of Becoming series, which celebrates the journey of evolution, it was the powerful subject matter and diverse cast that drew in the tennis star.

"[Levi’s was] thoughtful to highlight change makers in all types of roles," she tells Bustle. "This campaign really focuses on both inner and outer beauty.”

The series is the brainchild of "(In)Visible Portraits" filmmaker Oge Egbuonu, who came up with the idea during her daily meditation practice.

"[I saw] the image of a labyrinth,” says Egbuonu. “That to me really signifies and symbolizes the idea of becoming. A lot of people think a labyrinth is meant to confuse you, but it’s really not.”

Her labyrinth vision inspired the set, where subjects like Osaka navigate a maze of flowers while discussing their own growth and evolution.

“It signifies how life isn’t singular, nor is it linear, and there are so many twists and turns we may take,” Egbuonu says. “When you reach a moment and you can no longer go, you can turn back around and go another way. It signifies that this whole idea of rejection is just redirection.”

For the series, which also features photos by Shaniqwa Jarvis, Osaka joins celebs like Willow and Jaden Smith, pioneering models like Leyna Bloom, and disability activists like Haben Girma.

Besides being a world-class athlete, Osaka is becoming an activist in her own right, and is known for using fashion to send powerful social messages. Last year, she wore face masks on the court during the US Open with the names of police brutality victims, which resonated well beyond the sports world.

“People have been speaking out against police brutality throughout history, but crimes continue to be committed against POCs,” Osaka says. “I wanted to do my part in spreading awareness, so going into the US Open, I wore the masks to commemorate those who had been wrongfully killed by the police."

Osaka hoped to use her platform to educate viewers around the world about the discrimination people of color face in America. "Tennis is played and viewed to a global audience, so I think for some of the international fans, they had never seen any of those names before," she adds. "It meant a lot that I got to be the person to teach them about what was going on in America and encourage people to have those hard conversations."

Osaka also likes to wear items that celebrate her heritage. Her "all-time favorite" Levi's piece, a pair of custom wide-leg jeans the brand made for her, feature the Japanese flag on one back pocket and the Haitian flag on the other — a sartorial tribute to her ethnic background. And one of her most memorable on-court looks was the Nike x Sacai outfit she wore to the 2019 US Open. “The founder of Sacai is Japanese, so it meant a lot that we could collaborate together,” Osaka says.

After the Australian Open, fans can expect to see more fashion moments from Osaka, including drops with Nike and other brands — though she can’t say much about that just yet.

“We will be releasing collections every six months so the next drop will be in summer,” she says. “Other than that, I’m excited about two other fashion collabs that I can’t yet discuss, even though I’m dying to. One might even be Levi’s.”