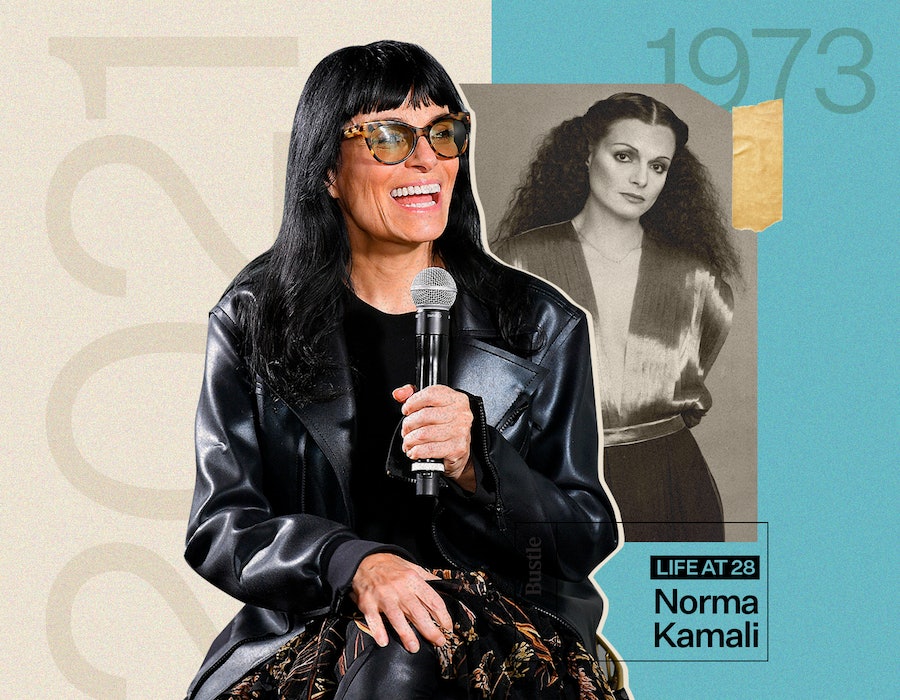 In Bustle’s Q&A series 28, successful women describe exactly what their lives looked like when they were 28 — what they wore, where they worked, what stressed them out most, and what, if anything, they would do differently. Here, iconic designer Norma Kamali remembers the early years of her career, risking it all to leave a bad marriage, and finding love almost 50 years later.

Some women age gracefully. Norma Kamali doesn’t appear to age at all.

That may be because, over the past decade, the beloved American designer has become a bona fide health guru, frequently extolling the virtues of intermittent fasting, acupuncture, and exercise.

Or it may be due to the fact that 75-year-old Kamali, who is best known for her “sleeping bag” coat and for designing the one-piece red swimsuit that made Farrah Fawcett an icon, still loves her work as much as she did at 28.

By that point, Kamali was already a successful designer. In 1968, when she was just 22, she and her then husband had opened the Norma Kamali boutique on 53rd Street, selling groovy fashions sourced from London. The native New Yorker soon began offering her own designs, too — tie-dye velvets, rhinestone-studded tees, and hot pants that attracted stars like Sly Stone, Diana Ross, and Cher. At 28, she hit her stride, creating a convertible dress, the famous pillowy coat (which she came up with by cutting up her own sleeping bag on a camping trip), and an adjustable draw-string “parachute” dress made of actual parachutes that established her as a fashion visionary.

But a year later, in 1975, she would walk away from her marriage, and lose her business in the process. “It was very scary,” she recalls. “But unless I [left], all of these other doors would have never opened.”

In 1977, she launched a new company: OMO, or On My Own, Norma Kamali, and she hasn’t slowed down since. Now in her eighth decade, she’s engaged to be married a second time, and she has compiled her advice on life and aging in her first book, I Am Invincible, out today.

“I see it as a handbook for women,” she says of the guide, which is organized by decade. “I do think my purpose in this life is to serve women. … Especially at this age, I can really say, ‘Listen to me. I know what I'm talking about.’”

That was one of the most prolific times of my life. I designed a group of dresses out of a jersey knit, and one of the dresses was called the All In One, and you could wear it a million ways. Those dresses are still in my collection today.

When you opened your store, you sold clothes by other designers. How did you start your own line?

After four years [of selling British imports], I started to see what my designs would look like. My mother made my clothes as a child. She was really very talented, and she helped me [create the clothes in my line]. But I was so insecure. I was sure I would have to pay people to buy them. It was unbelievable to me that people were paying to wear these things.

"In that time, people shopped as sort of a sport — you'd get dressed to go shopping."

You had quite the clientele … Bette Midler, Yoko Ono, the New York Dolls.

And it was a little basement store! Then we got a parlor floor.

In that time, people shopped as sort of a sport — you'd get dressed to go shopping. Couples would go shopping together. Actresses, actors, athletes, a lot of musicians, singers would come and shop. They didn't have stylists at the time; everybody had their own taste and wore what they liked.

You never studied fashion design. When you were starting out, was it hard to convince customers or employees to trust you?

When I had an idea, if [the patternmakers] didn't want to do it, they would say, "It can't be done.”

I was very shy and quiet, and I'd say, "Okay, I've got to learn how to do this, otherwise I'm in the hands of people who aren't as passionate about this as I am." I put a lot of effort into learning how to make a pattern, so that the style could be then cut and sewn.

When you were 28, you were a year away from leaving your marriage. Did you realize that things weren’t going well in your relationship?

We met each other dancing and winning dance contests together. We got married at 19. He was the right person for me to leave my mother's house, because [in those days] you didn't just live with someone.

But by 29, he and I were so different. He was very social, and he wanted to date a lot, and he did. I also think he didn't know how to deal with the fact that I found something that I love to do that I could do 24 hours a day. I wasn't going out dancing every night. I was working until three in the morning, sewing and cutting. I had a certain independence as a result of it. He knew that I was an entity on my own that he could not control.

I only had $98 to my name — which he made sure was all that I would have because he was managing the money. I didn't know what I was going to do, but I needed to go.

"The biggest lesson you can learn is that unless you communicate with people and tell them what you need ... nobody can help you."

What or who helped you through that?

I never told anybody about what was going on. I was very shy and very uncomfortable talking about problems or sharing any of that. I was embarrassed and sort of humiliated, too. He even dated some of my friends.

The day after I left, I had a very rare appointment with an editor from the LA Times. I'd never met the press — [my ex-husband] did that — and my face was swollen from crying. She said to me, "What happened to you?" I told her everything. It was just pouring out of me. And she said, "I'm going to help you."

So it turned out that her husband worked in the garment industry, and he connected you with people?

I was overwhelmed [by their generosity]. The biggest lesson you can learn is that unless you communicate with people and tell them what you need, or what's going on, nobody can help you.

Now you’re engaged, after finding your soulmate at 65. Did you think that you would be getting married again, at this point in your life?

No! Both of us work very hard, so we don't spend lots of time together, ... but COVID kept us together every day. We started to cook together and binge-watched movies, took long walks — [and] we were like, "Whoa, we really like each other. That's cool." So we decided, why not?

That's great. Are you going to design a traditional white dress?

I don't know — it's going to be spontaneous. All I can say is that I plan to dance!

More like this
Priyanka Chopra's Unfiltered Thoughts On Y2K's Most Polarizing Denim Trend
By Dominique Norman
At 28, Lesley Manville Was Acting, Picketing, & Singing Kate Bush Songs
By Olivia-Anne Cleary
Are Skater Shoes the Next Y2K Trend to be Revived by Gen Z?
By Lauren Alexis Fisher
At 14, Melissa Barrera Was Planning Her Quinceañera & Falling In Love With Musical Theater
By Gabrielle Bondi
Get Even More From Bustle — Sign Up For The Newsletter