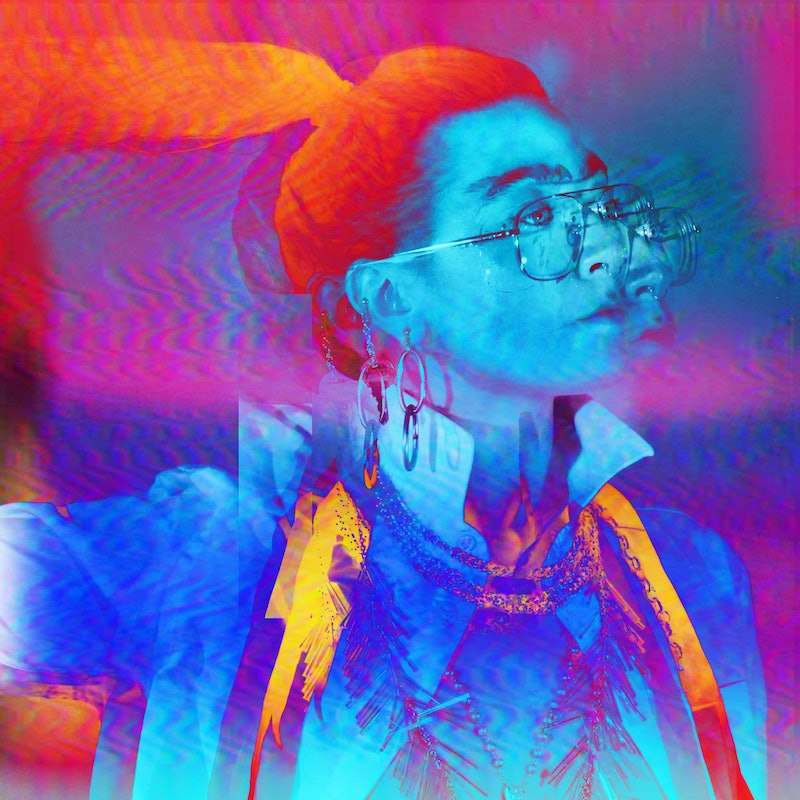 Darragh Dandurand. Image courtesy of the artist.
By Irina Makarova
May 3, 2021

Darragh Dandurand is a one-woman powerhouse and creative hub who is a leading voice in emerging and immersive technology. The award-winning creative director is also a strategist, photojournalist, and curator of future-tech programming and exhibitions. Last month she worked with the team of SXSW 2021 as a guest curator who created and moderated the festival’s first "The Future of Fashion: Style and Immersive Technology" track, focused on mixed-reality tech for fashion use-cases.

Carrie Able is a fellow creative working in emerging tech. How did you two meet?

Carrie is a multidisciplinary artist who happens to also see the power in bringing AR technology to fine art. She runs The Carrie Able Gallery in Williamsburg and seems to be great at every medium she tries! I met her in 2019 when I was curating an international group show called “PRIDE ON CANAL: Queer Form” for the Wallplay Network in New York City. Wallplay asked me to come on as an emerging art-tech curator representing the queer community in June of that year. It was such an honor since I was also on the board of NYC Pride hosting World Pride at the time and it felt like all my worlds were blending beautifully. Carrie was also working with similar tech as what I was curating and is queer herself. She came into the gallery to meet me and since that first “hello,” I’ve appreciated the way she brings artistic passion and kindness to all our conversations.

Tell me about your upcoming project with Carrie in Venice? How did you become involved?

A few months ago Carrie called me with a proposition: would I like to advise on and produce her art show in Venice in April 2022? She was invited by the European Cultural Centre to do a solo exhibition in their annual seven-month-long show. Artworld heavyweights, like Yoko Ono and Marina Abramovic, have exhibited in it in the past. With a timeline just over a year out, I thought it was a great opportunity for us to partner on an emerging technology show of all of her original works, plus our AR formalwear collaboration.

How did you come to the idea of AR-enabled clothing for Carrie?

I want to tell stories through clothing and a really direct way to do that is through augmented reality. I originally proposed the concept of an AR dress for her to wear on opening night. She's also probably going to do a live performance and I wanted her clothing to come alive when photographed or recorded. The idea itself is to take her recurring motif of these little, angelic, abstract women and have them somewhere on the piece that would logistically and fashionably make the most sense as an AR marker, or QR code essentially. From there, we would have those little angels animated, perhaps flying around her. We were on a call and I thought “what if we did a cutout (exposing your skin)?” She is very pale, like me (ha), and wearing a dark-colored garment with her skin coming through to create the marker could work. She countered me to acknowledge that I’m very fluid with my gender presentation regarding the variety of styles I dress in and if I would perhaps consider designing a garment for myself that was akin to an augmented suit. She’s putting me on task to finally design something for myself!

What’s the future of AR design and fashion tech?

I'm telling you, the AR fashion industry is going to blow up. That being said, I have a very strict rule that augmented clothing should be beautiful on its own without the technological component; the tech should wholly enhance it, but you shouldn't have to need the AR to seal the deal essentially on whether or not it works for styling or functional purposes.

As far as the tech itself, scanning and tracking augmented graphics is getting better all the time. I’m basically on a quest to redefine and redesign QR codes for clothing. The challenge of creating the clothing itself though, such as for my collaboration with Carrie, will be around fabric texture, weight and movement, plus graphic placement.

Per form and function, I appreciate aspects of androgynous garment design, because I could make clothing for anyone. What I love about fashion is that it can be anything. There is no right and wrong, although the advertising and fashion industries will tell you otherwise. Inclusivity in industrial design is very important to me. We have to be more conscious and aware that our consumers are not all super tall, leggy, white women and there are so many other body types that we need to be designing beautiful things for. Bodies are these wonderful, weird experiences, and creating for them becomes not just about the flow of the clothing, but about the flow of the content, and of augmenting style.

What improvements can the industry make?

From a design standpoint, we’ve been bred to expect novelty, customization, and interaction, so brands should see augmented clothing with high engagement potential. To me, there are seemingly infinite opportunities, but the consumer base and technology both need to catch up.

A lot of new developments in emerging tech are still for the techies, so until we design something that’s not for the people who understand how it was built, but is for the people who want to wear it, then we are just spinning our wheels. Before we have super-comprehensive web XR or a dominant AR platform for mobile, I’d rather wait it out a bit longer before I design the ready-wear augmented street style line of my dreams. For now, designing formal pieces for opening nights at art exhibitions is where I’m putting my experimental energy. This project with Carrie will be a fashion, tech, and performance art statement all-in-one.

Who are successful future-fashion designers whose work you follow?

There are several brilliant minds defining this niche overlap between the fashion and technology industries. I love the work of Kailu Guan. She designed some of my favorite AR clothing and now is working to bring AI and skincare together over at HelloAva. Other designers and studios I watch who put me in a state of awe are Neri Oxman, Paula Ulargui, Anouk Wipprecht, The Fabricant, ETEREshop, Damara Inglês, and Nixi Killick. Per big brands, Gucci and Nike have impressed me a lot in the past few years, and of course, I’ll always be inspired by Alexander McQueen’s legacy.