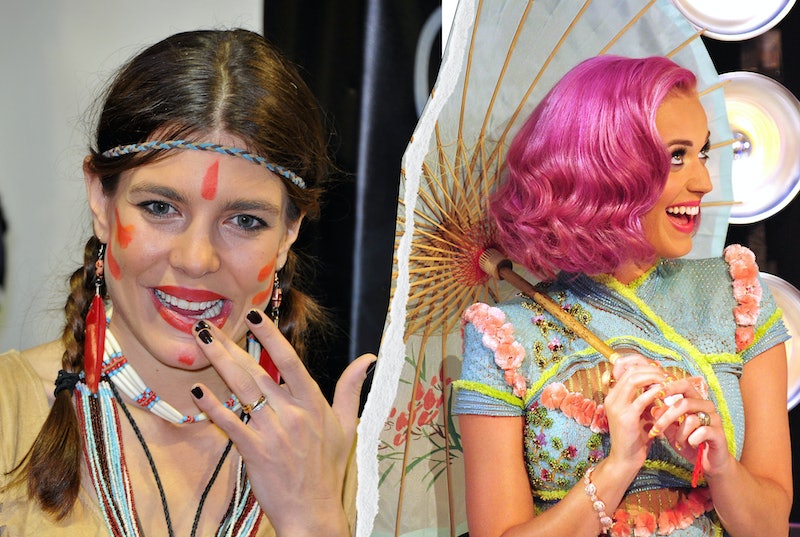 With each passing day, Halloween inches ever closer. It's one of most fun holidays out there, and the necessity for costumes can give people a big creative outlet. Whether you're a do-it-yourself type or prefer piecing something together from existing or store-bought clothing, the options are endless. Unfortunately, though, sometimes people take their Halloween costume freedom a little further than they should. To put it simply, there are a whole lot of racist and sexist Halloween costumes which you should never wear, under any circumstances.

And even though most of these should be really obvious, maybe a helpful primer will help you avoid horribly offending anyone or bringing shame upon yourself. To be clear, though, it's not just about other people's reactions ― if you care about living up to standards of decency, good taste, and anti-racism, it's important to practice that all the time, and that includes dressing up for holidays.

So in that spirit, here's a list of Halloween costumes you absolutely should not emulate, unless you want your picture to end up in one of the inevitable "50 Most Racist/Sexist/Offensive Halloween Costume" stories that'll be written in early November.

1. Blackface Of Any Kind

No. No. No. Do not do it. Blackface is a racist tradition that has grisly historical roots in America, but it really doesn't matter where you are or where you're from ― don't do it. It's racist and grotesque.

On the topic of offensive costumes which turn Native Americans into mascots, don't think you get a free pass just because you put one on a child. If you've got kids and are looking to help them with a costume, avoid it.

Native Americans aren't Indian, of course ― that's a misnomer made by early European explorers in North America, and until relatively recently, most Americans haven't cared enough to correct it. But make no mistake, if you're of any non-Native race, you're going to deserve the hell you catch for dressing up in an offensive, stereotypical "Indian" costume.

4. Dressing Up As Refugees

There's nothing clever or funny about making light of refugee crises around the world. There are probably going to be more than a few people who think this is a good idea. They're very, very wrong.

5. Dressing Up In Hitler Costumes

Adolf Hitler, the leader of the mass-murdering Nazi regime, is not a laughing matter, nor is he the type of acceptable "scary" that's appropriate for Halloween night.

6. Or In Fact, Any Nazi Costumes

Pro tip: Dressing up as Hitler is not any funnier or more acceptable if you also dress up your baby as a Jewish prisoner of a Nazi death camp. It's just plain horrible.

Every year, some number of people decide to dress up in attire that has rich religious and cultural meaning, in ways that can be very crude and denigrating. Case in point: If you're not a practicing Muslim, donning a burqa for a Halloween party is offensive and demeaning in the extreme.

The traditional aesthetic of minority groups and cultures shouldn't be made into mascots or jokes for predominantly white American culture, and this is a great example. Inuit or Yupik Halloween costumes are not cool.

Blue Lives Matter is an inflammatory statement which denigrates the racial justice efforts of thousands upon thousands of Americans ― Black, brown, and white alike. If you want to dress up as a police officer, that's well within the mainstream of Halloween costuming, but keep this phrase out of it.

Dressing up in "sexy" military uniform costumes can be seen as demeaning to American women in combat, as well as disrespectful to American veterans in a general sense.

Trying to exploit Asian stereotypes is no more noble or less offensive than any other kind of racial stereotype, even though they're frustratingly more common and accepted in American society.

If there's an overriding principle here that is maybe becoming clear, it's that other racial groups and foreign cultures are not just fodder for our fun Halloween costumes. Do yourself a favor this year and avoid this kind of cultural appropriation.

Whether you know anybody who's been to prison or not, whether you've led a life of struggle or relative privilege, the dynamics of racial injustice in sentencing and the sad state of America's prisons make dressing up as a convict a needlessly loaded proposition.

If you're looking for a terrorism-related costume, first of all, that's not really the kind of subject matter that's going to win you many friends on Halloween night. But more importantly, many of them are wildly racist, entreating you to dress up as an Osama bin Laden-style caricature, as if "terrorism" and "Islam" are one and the same.

If you're white, or even a person of color who isn't a Rastafari, know that this sort of costume is offensive on both cultural and religious lines.

Sorry, Cleveland Indians fans, but yeah, your team name and logo (the grotesque mascot "Chief Wahoo") are both super racist and unfit to be worn anytime, whether it's Halloween or not.

More like this
42 Black Owned Fashion & Beauty Brands To Support Today & Always
By Mekita Rivas, Shea Simmons, Kui Mwai and Dominique Norman
Aerie’s Curve-Hugging Offline Leggings Will Give You A BBL In Seconds
By Bella Gerard
Spring 2023's Hottest Shoe Trends Include Moto Boots, UGG Minis, & More
By Allie Fasanella
12 Red-Hot Valentine's Day Outfits Perfect For The Holiday Of Love
By Dominique Norman and Kelsey Stiegman
Get Even More From Bustle — Sign Up For The Newsletter
From hair trends to relationship advice, our daily newsletter has everything you need to sound like a person who’s on TikTok, even if you aren’t.

This article was originally published on Oct. 17, 2016