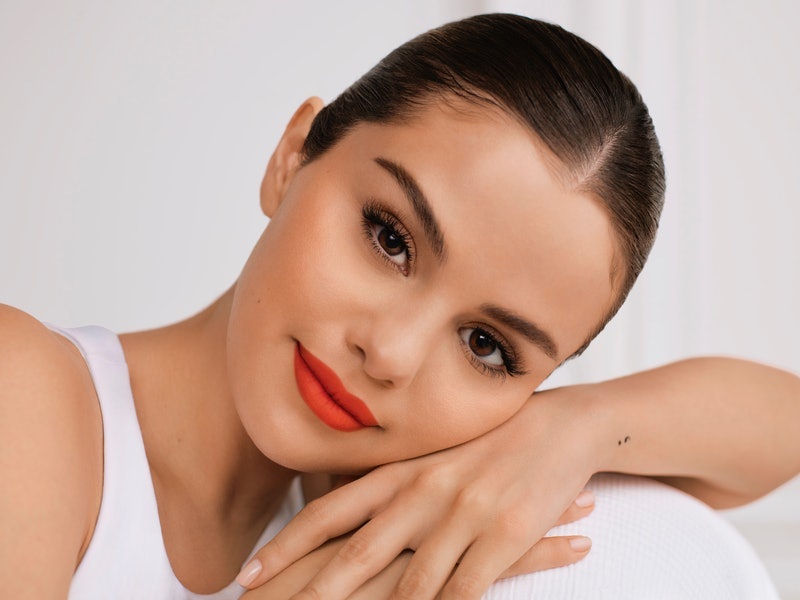 By now, I have logged into and survived a Zoom baby shower, a Zoom wedding, many Zoom happy hours, and a Zoom surprise party for my grandmother’s 92nd birthday. It’s when I Zoom into a call with Selena Gomez that I have technical issues. We smile at each other when she appears on screen and says hello, but then she squints. “I can’t hear you!” she says cheerfully from a creamy pink, sunshine-filled room dotted with makeup products. Now I am grandma.

We are struggling in honor of her new beauty line, Rare Beauty, which launched this week in Sephora locations nationwide and on RareBeauty.com. The line, which borrows a name from the album and single she released in January 2020 (“I'll bet there's somebody else out there/To tell me I'm rare, to make me feel rare”), includes a whopping 48 shades of foundation and concealer, eight liquid blushes and eight highlighters, and 12 lip souffles, which read more matte lipstick than shiny gloss and have uplifting names like Fearless, Heroic, Motivate, Ascend, and Inspire, among other products. Prices range from $5 for blotting papers to $29 for the foundation.

Gomez tells me that her biggest priorities for the line were keeping it “inclusive” in terms of the range of shades; “the contents in the actual products,” which are certified by PETA to be cruelty-free and vegan; and “the message.”

The message and the mission, according to the promo materials, is to “break down unrealistic standards of perfection” and “to promote self-acceptance and give people the tools they need to feel less alone in the world,” which sounds a bit counter to the whole concept of lipstick and concealer. Gomez doesn’t see it that way.

[Being in the public eye at a young age] was a lot about what I look like and the makeup I would use. I don't read the internet anymore, but it just didn't make me feel good.

“It's something that I wanted to be much bigger than makeup, because I fully believe that it's your mind and it's your body and it's your soul. The relationship with you and your makeup should be healthy and should be fun and should be, in some cases, I've found, therapeutic,” she says. “Obviously, I've been doing this for so long. Having yourself be exposed — and that just kind of went into my pre-teens, early 20s — and that was a lot about what I look like and the makeup I would use. I don't read the internet anymore, but it just didn't make me feel good.”

How can someone learn to approach makeup in a healthy way, with a sense of lightness? “I have fun by just doing [it] with my friends or on my friends,” Gomez says. “Like sometimes if I'm getting ready and I'm alone, I listen to music and just kind of relax and enjoy it, try new things.” The pandemic has allowed her (and most of us) uncharacteristically long stretches without worrying about our appearances. “What was interesting is I ended up using makeup a lot to just try these different products and sit with the things I’m creating. I actually relearned so much through this line because I had gone so long without it.”

Producing a makeup line isn’t the only thing she’s done during lockdown. She also created a quarantine cooking show for HBO Max, Selena + Chef, which debuted just weeks ago, and hours after we close out our Zoom, she released an end-of summer music video and bop, “Ice Cream” with K-pop girl group Blackpink.

And in April, she also shared a diagnosis of bipolar disorder. “After years of going through a lot of different things, I realized that I was bipolar,” she told fellow former Disney star Miley Cyrus in an Instagram Live. “When I know more information, it actually helps me. It doesn’t scare me once I know it… I’m from Texas, it’s not known to like, talk about your mental health.” Gomez had previously disclosed several in-patient stays in rehabilitation centers to treat her depression and anxiety over the last few years.

[Not knowing your mental health diagnosis] is really frustrating because when people don't know, it feels like you're really alone, and you feel crazy. Because like, why doesn't anyone else feel like I feel?

With the launch of the beauty line comes the Rare Impact Fund, which aims to raise $100 million over the next 10 years for mental health services in underserved communities, and the Rare Beauty Mental Health Council, a panel of experts who will consult on the company’s strategy “to ensure maximum impact.”

“It is something that is very close to me. I've been honest about things in mental health and about my story, so I knew that it was going to be something that I should include,” Gomez says. “I know that there is still such a stigma, but there's still so many people who don't even know [their diagnosis]. And it is really frustrating because when people don't know, it feels like you're really alone, and you feel crazy. Because like, why doesn't anyone else feel like I feel?”

Asked for her advice on how fans can deal with their mental health during the pandemic — when they should be setting off for college parties, for their first big jobs, for simple time with friends, but are instead grappling with unending panic, uncertainty, and solitude — Gomez goes dark. She drops her head down to her chest and lets her hair fall in her face. “I just really... it breaks my heart, because I actually don't know what to say,” she says in a low voice. “I would just say that I would not have been able to walk through any of this without my family, even my chosen family. I think having a connection to people is what keeps me sane. And I also feel like taking walks around, being in nature — all of that sounds cliche, but it's actually very true.”

The Rare Beauty site also lists resources like the Trevor Project, the National Alliance on Mental Illness, and the Sad Girls Club, which emphasizes support for women of color. “You're not alone. There are a lot of people that are dealing with this,” she says. “Hopefully you can find that support in whatever area you need, but [know] you can come to my community — there will be ways for you to seek help.”

I round back to the fun of makeup, and she shares her favorite lip colors in the line. “So hard! I love trying on different ones,” she says. “Mine is always the signature red. It's called ‘Inspire.’”

“I've actually never told this story,” she continues. “I would wear red lipstick and a guy that I was seeing, he was like, ‘I don't want to kiss you when you wear red lipstick, so I just don't think you should wear it anymore. I was like —” She picks up a red lip souffle, dramatically pulls off the cap, and mimes applying it with flare and defiance. “Boop!”

More like this
15 Talc-Free Makeup Brands For Safer Eyeshadows, Powders, & More
By Audrey Noble
Billie Eilish Teased The Debut Of Her New Fragrance
By Audrey Noble
12 Bellissima Beauty Moments From Milan Fashion Week S/S 2023
By Olivia Rose Ferreiro
26 Easy Halloween Makeup Looks For 2022 That Require Zero Skill
By Olivia Rose Ferreiro
Get Even More From Bustle — Sign Up For The Newsletter