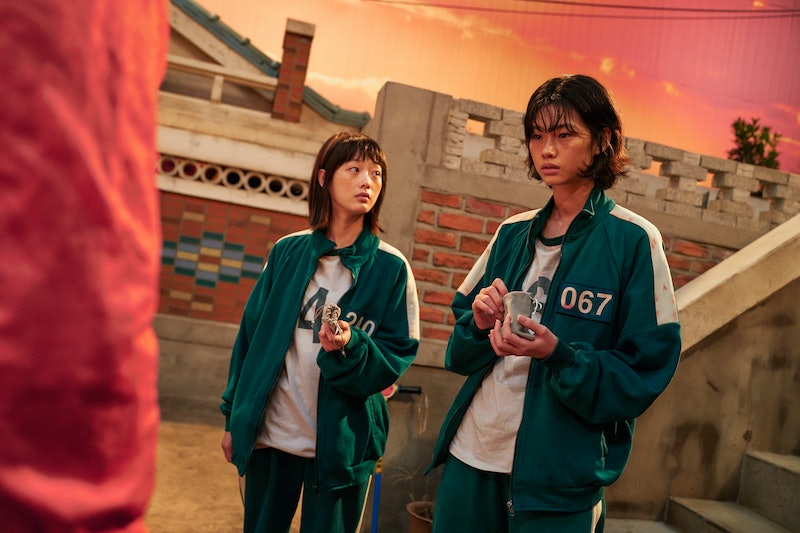 Squid Game is Netflix’s next runaway hit, ranking second highest in demand worldwide on the streaming platform. In fact, co-CEO Ted Sarandos predicts that the series, based in South Korea, may become Netflix’s most popular non-English show ever.

The show centers around several children’s games — think ‘Red Light, Green Light’ or ‘Tug of War’ — where the losers are eliminated and then murdered. Yes, you read that right. People are shot the second they lose the game. On the flip side, the winners of all 6 games walk away with a cool $45.6 billion, a tempting prize for the 456 contestants who are massively in debt.

While the premise is thrilling enough on its own, fans are also enthralled by the casting and costuming of the nine-episode series. Featuring celebrities like HoYeon Jung, a top model who’s appeared on the runway at Chanel and Louis Vuitton, the show relies heavily on fashion to send certain messaging about the characters and the plot.

Most central to the narrative, of course, is the Squid Game costume worn by the contestants and guards. Those outfits are quite casual and laidback, yet the color holds a deeper meaning that speaks to the plot’s many twist and turns.

Read on for everything to know about the Squid Game costumes and outfits, and the symbolism behind them.

Where To Buy Squid Game Costumes

For players, the Squid Game costumes look a lot like something you might wear to run errands or head to a movie theater. The look consists of a teal tracksuit with the contestant number printed on the front and back in white as well as a pair of white slip-on sneakers.

Much like the idea of childhood games that result in mass murder, the casual fashion in Squid Game is used to create tension. A relaxed outfit seems out of place for a survival game; a military-inspired, armor-like uniform would be better suited. But the juxtaposition of a laidback look and a high-stakes game adds to the thrill of the series.

The color of the Squid Game costume serves that same goal. Teal signifies peace and rebirth, blending “the calming properties of blue with the renewal qualities of green,” according to Canva. It’s described as a “revitalizing and rejuvenating color that also represents open communication and clarity of thought.”

Ironically, open communication and clarity is something that is desperately lacking throughout the series.

The Squid Game guard costumes also play on the viewer’s emotions. Their hooded jumpsuits seem menacing, but the color itself is decidedly not.

Though hot pink is an energetic and provocative shade, pink generally “evokes notions of sensitivity, sweetness, and romance,” according to Canva. Again, it’s not a mood one might associate with a guard presiding over a survival game that could end in mass murder.

Some viewers are interpreting the Squid Game guard costumes as red, and that color may be more fitting for the thriller. Red can symbolize battles, courage, and anger, according to Live Science. It’s also the color of blood, which viewers see oozing out of gunshot wounds throughout the series.

The black zippers, belts, and masks serve to emphasize the guards’ authority and perhaps their depravity too.

Where To Buy Squid Game Masks

The Squid Game masks are probably the only fashion item you can take at face value. The black and opaque masks are just as intimidating as you’d expect. But an eagle-eyed fan of the show pointed out one disturbingly playful detail.

The white circle, triangle, or square on the front of each mask resembles the buttons on a PlayStation controller.

While a Dystopian drama isn’t top of mind when one thinks of Playstation, the buttons do speak to how the series is just one big horrifying game.