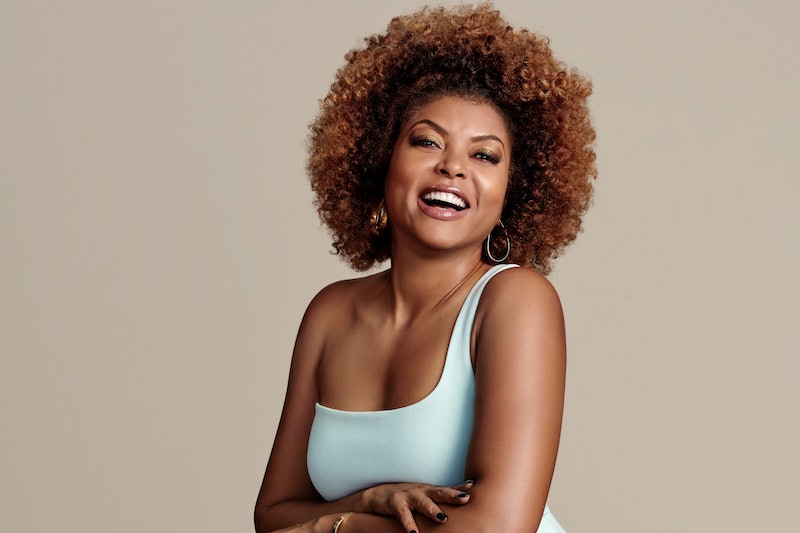 Courtesy of TPH by Taraji
Sponsored
Amplifying Our Voices

Any Black woman will tell you that one of the first rules about our hair is to never touch it. So when Taraji P. Henson asked an entire room of journalists (read: strangers) to dig our hands into her natural tresses, we balked. She couldn't be serious? But the actor insisted. She wanted to show the power of her new TPH hair care line and its effect on her hair. Eventually, some of us took the risk and ran our fingers through Henson's curly brown and blond locks. Though her hair was color-treated, it felt so soft and looked incredibly healthy.

It's all thanks to the products in Henson's new brand, which cover four hair care categories: cleansing care, scalp care, treatment styling, and hair repair. The products — sold exclusively at Target — are thoughtfully color-coordinated so you can easily spot them on the shelf and figure out which one best suits your hair type and concerns. Plus, everything in the line ranges from $9 to $15. Henson hosted her “Hair Dare University” Pop-Up event on Jan. 24 in New York to celebrate the launch and shared her hair journey and how TPH came to be.

“I love my hair,” Henson tells me. “Always, always. My mom permed my hair when I was in second grade and she’s a single mother. I had a lot of dead hair, a curl pattern totally different than hers. She didn’t know what to do with it and I was very tender-headed and dramatic. Literally passing out. She was like ‘I’m not doing this with you, so she started perming my hair in the second grade.”

From then on, Henson continued on a straight and narrow of relaxers. However, she tells me it wasn’t until her role in Baby Boy in 2001 that she realized there were other alternatives to perming her hair.

“My hairstylist at the time looked at my root and was like ‘why are you relaxing your hair?’ and I was like ‘because it’s nappy,’” Henson recalls with a chuckle. “So she talked me into growing out the perm. I still had to fit in, so I was doing press and curls. After years and years of doing that and doing weaves and leaving that whole piece [of hair] out, it was damaging. I was tired of it.”

This prompted Henson to embark on a hair journey to try and find ways where she didn’t have to leave her hair out in the open, over and under weaves. Trying to level with her hair, Henson says she even tried weaves with “the curly, curly, curly hair for Black girls, so it could match,” but even that wasn't great. Lace front wigs, however, are what made Henson cut off her hair in 2017, leaving her days of perms in the past.

“After a while, lace fronts came in and I was like, I’m chopping this sh*t off, I'm going to start from scratch, because I could grow my hair under a wig,” says Henson. “So I cut all those straight dead, dry ends off and I started from scratch. Then I fell in love with my natural hair and then I was like, I’m never straightening my natural hair ever again. Why, when I could wear a wig?”

But even throughout all of Henson’s hair ups and down, she could never find anything suitable on the market for her ever-changing looks. That's why she decided to launch TPH. Henson tells me that her mission through this brand is to be the Fenty Beauty of the hair world.

“I’m a huge Rihanna fan, so anything Rihanna, she got me,” Henson says. “But Fenty’s actually pretty dope. But as a huge fan of hers, when I purchase Fenty, I feel like I have a piece of her. So I mean, if I’m going to create a line, why would I leave out anybody?”

The collection treats its wide variety of products as if it were a skin care line. Even the TPH website curates the best products for customers based on hair type. With a heat protectant called “Hot Commodity,” a “Never Salty” scalp scrub, and a “Tough Cookie” style-defining gel, Henson covers several hair types and textures. Not to mention, the products are named all in her own voice.

“They had to sound like, this is something Taraji would come up with; It had to sound like my personality,” Henson shares. “It was important that the line stands out, and we wanted to give it names that were memorable. We didn’t just want it to be ‘the such and such shampoo.’”

Henson says the current product line is only the foundation for the brand. Though not everyone can use every product in the line, that won't be the case for long. The actor-turned-entrepreneur wants to branch out further into men's hair care as well as other niche groups, like weave care and children's hair care.

"I’ve had men hit me up in my DMs [about hair care products]. I’ve also heard, do you have a child care line? I literally meant what I said: Think of TPH as the Fenty Beauty of hair. That is my mission."

More like this
The Best Beauty Looks Spotted At Paris Couture Week 2023
By Audrey Noble
11 Stunning Critics' Choice Awards Beauty Moments
By Audrey Noble
This Week’s New Makeup Releases & More Beauty Headlines
By Audrey Noble and Erin Stovall
13 January 2023 Beauty Launches Our Editors Can't Get Enough Of
By Rachel Lapidos
Get Even More From Bustle — Sign Up For The Newsletter
From hair trends to relationship advice, our daily newsletter has everything you need to sound like a person who’s on TikTok, even if you aren’t.