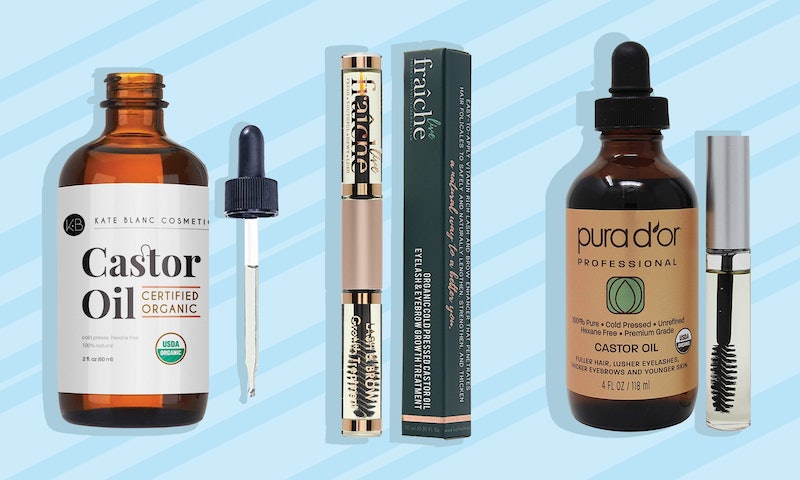 If you're looking to rock longer, thicker lashes without opting for extensions, falsies, or multiple coats of mascara, then you've likely heard of castor oil. While this oil, which is derived from castor seeds and rich in good-for-hair fatty acids, hasn't been scientifically proven to boost lash growth, anecdotal evidence from folks who swear by it seems to point to some benefits. The best castor oils for eyelashes are safe to use near your eyes, and packaged in application-ready bottles.

What To Consider When Shopping For Castor Oils For Eyelashes

First, a quick lesson on what to expect from using castor oil on your eyelashes. Though, as mentioned above, there's no actual scientific evidence to prove that castor oil helps with hair growth, coating your lashes with it will still help keep them conditioned and nourished. This can result in overall healthier, softer lashes, which definitely isn't a bad thing — so there's no real downside to trying it out.

The other important thing to keep in mind when choosing a castor oil for eyelashes is that, since it will be going on so close to your eyes, you'll want to make sure you're using a clean formula consisting of only pure castor oil — one that's ideally certified-organic by the USDA. And if you’ve never used castor oil before — particularly on such a sensitive area — it’s a good idea to do a patch test somewhere else on your skin (like the inside of your wrist) to ensure you’re not allergic to it before applying it to your lashes.

In a hurry? Here are the best castor oils for eyelashes:

Without further ado, check out three of the best castor oils for eyelashes (and you can use them on your brows, too!).

More like this
14 Hypoallergenic Earrings For Sensitive Ears, According To Jewelry Designers
By Amy Biggart
Of The Cheap Trendy Fashion Pieces On Amazon, These 40 Look The Best On
By Hannah Lynn
Amazon's Selling A Ton Of These Trendy Winter Clothes That Look Good On Everyone
By Emily Johnson
Amazon Keeps Selling Out Of These Comfy Basics Because They Look So Freaking Good On Everyone
By Hannah Lynn
Get Even More From Bustle — Sign Up For The Newsletter
From hair trends to relationship advice, our daily newsletter has everything you need to sound like a person who’s on TikTok, even if you aren’t.

This article was originally published on June 16, 2019