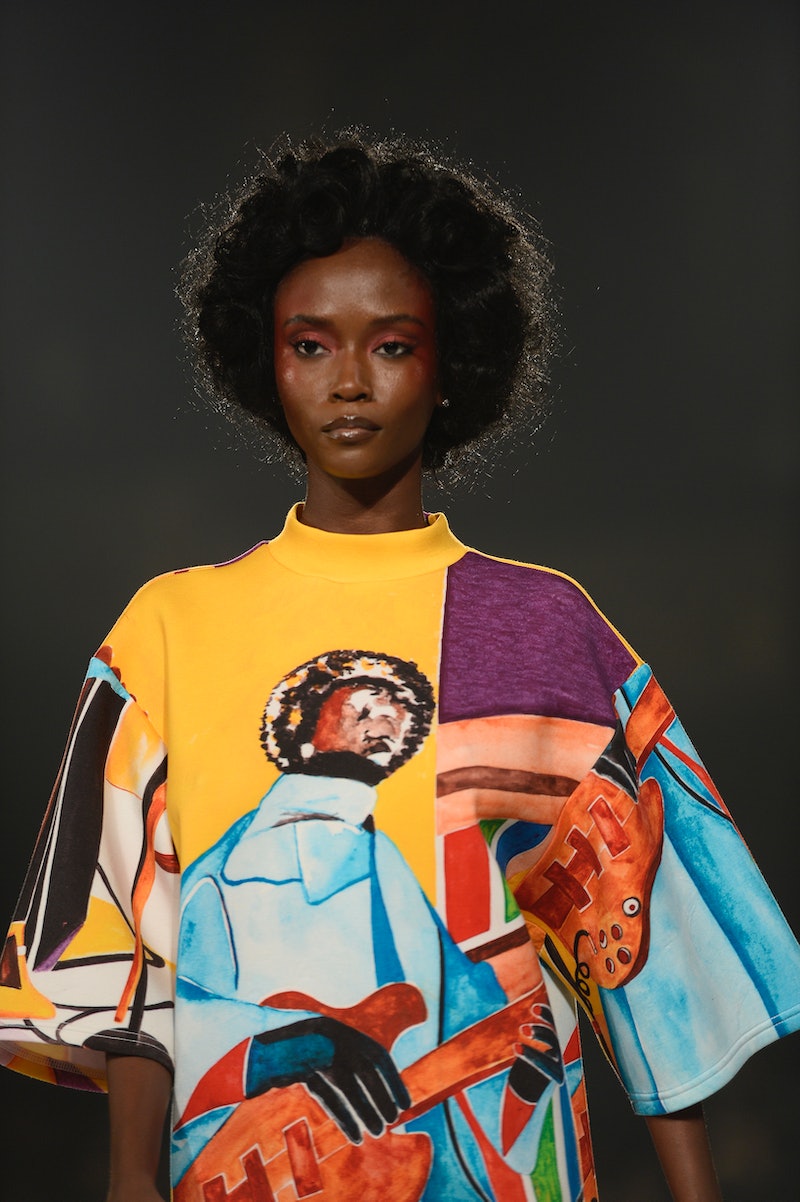 It’s safe to say that New York Fashion Week, and the fashion industry as a whole, has come a long way as far as diversity goes. While there’s still strides to make for inclusive fashion, the Pyer Moss 2019 fashion show made leaps for representation of Black people and Black hair on this season’s runway.

The mastermind behind the Pyer Moss brand is Kerby Jean Raymond. The designer first launched the men’s and womenswear brand in 2013, surrounding the heritage of Black culture and activism. Raymond’s Spring 2020 show, Collection 3, marks the final chapter of his "American Also" series, which exemplifies Black people's contribution to American society. The show debuted Sep. 8 at the Kings’ Theatre in Brooklyn as a tribute to Blackness in the age of Rock N Roll inspired by Black queer female artist Sister Rosetta Tharpe. Displaying incredible street style-inspired silhouettes and ’70s themed fits was a given, but the cast of all Black models in their various hairstyles is what truly set each look off.

From Afros of different heights and shapes to beaded box and Fulani braids to even hijab-wearers and dreadlocks, Black models of all backgrounds came out on the catwalk proudly presenting the versatility of Black hair in front of an entirely Black gospel choir.

“I think relatively few people know that the sound of rock and roll was invented by a queer black woman in a church,” Jean-Raymond said in a Vogue interview. “I wanted to explore what that aesthetic might have looked like if her [Tharpe] story would have been told.”

Hairstylist Jon Reymand was the creator behind many of the blow-out fro looks in the show. According to a press release from Dyson, who helped shaped the hair looks for the runway, the inspiration behind the hair looks was ‘70s rock and roll artists. Can’t you tell by these afros that scream “get down with yo bad self?”

In addition to the incredible Black hairstyles shown at the show, even the makeup provided for the models to rock was Black-owned and made for with the deepest complexions in mind. According to a press release from Pyer Moss, Sharon Chuter's popular makeup brand Uoma Beauty acted as the official partner for the show with celebrity makeup artist Daniel Sallstrom at the helm of every show-stopping makeup look.

Sallstrom used some of the brand's already iconic products such as Uoma's Say What?! Foundation (offers 51 shades), the Black Magic Eyeshadow Palettes to create these bold '70s eyes, and the Double Take Contour + Highlight.

Raymond has made statement-making shows like this one in previous years with the first two installments of the "American Also" series. In September 2018, Raymond premiered a similar show in Brooklyn, NY that wowed the masses with a gospel choir, and the designer has stayed true with another year of displaying Black magic on a runway.

Implementing live music like Queen Latifah's "Unity" and Anita Baker's "Sweet Love" made Pyer Moss' fashion show an unforgettable experience, but the models, hairstyles, and overall looks is what makes this Black-owned brand's show a moment to remember in the fashion history books.