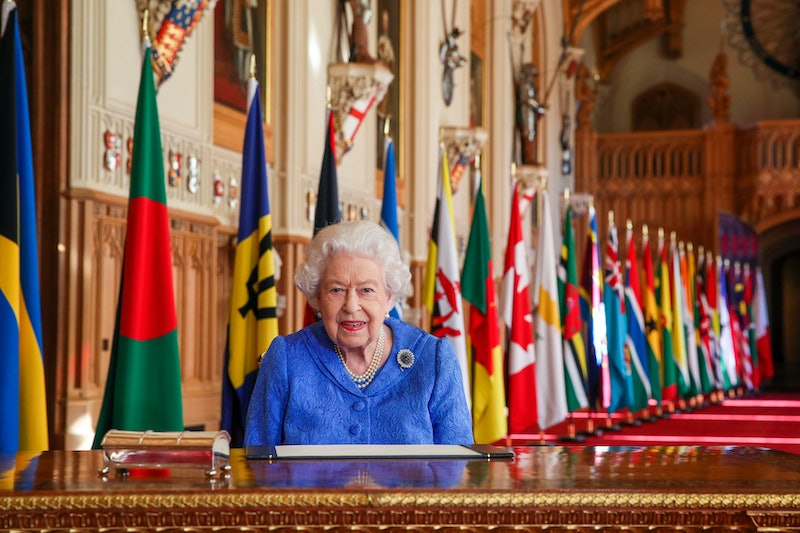 The annual Commonwealth Day service is a major event in the royal calendar, but the pandemic forced this year’s events to be cancelled. Instead, the Queen shared a pre-recorded message – A Celebration For Commonwealth Day – on March 7. While the timing of the televised message has been widely noted in the media (it was broadcast ahead of the Duke and Duchess of Sussex’s interview with Oprah) the brooch she wore has a rather touching back story.

For her address, filmed at St. George’s Hall in Windsor Castle, the Queen wore a delphinium blue dress and jacket of silk and wool cloque by Angela Kelly. She accessorised the look with her classic pearl drop earrings and necklace, and a chrysanthemum brooch pinned on her left shoulder.

The platinum, diamond, and sapphire chrysanthemum brooch is one of the most meaningful pieces in the Queen’s collection. Per the Court Jeweller, it is a design the Queen has worn on many occasions, both public and private, though the years.

The brooch has featured in multiple family portraits throughout her life, including early family snaps with the young Prince Charles and Princess Anne from 1950. She was most recently pictured wearing it alongside Prince Philip in a portrait released to mark the couple’s 73rd wedding anniversary last November, per the Telegraph.

Most famously though, the brooch is the same one the queen – then a princess – wore on honeymoon with Prince Philip at Broadlands House in Hampshire in 1947. (She famously also wore it when the couple recreated the famous image in November 2007, to mark their 60th wedding anniversary.)

A Celebration For Commonwealth Day was broadcast on Sunday (March 7) evening, as news emerged that Prince Philip had been moved back to the private King Edward VII’s hospital for his third weekend in hospital, to recover from heart surgery.

While clearly a touching tribute to her husband, royal watchers also believe the brooch was chosen to send a message of “closeness and community,” as echoed by her speech.

"The need to maintain greater physical distance, or to live and work largely in isolation, has, for many people across the Commonwealth, been an unusual experience," she said in her address. "In our everyday lives, we have had to become more accustomed to connecting and communicating via innovative technology—which has been new to some of us—with conversations and communal gatherings, including Commonwealth meetings, conducted online, enabling people to stay in touch with friends, family, colleagues and counterparts, who they have not been able to meet in person."