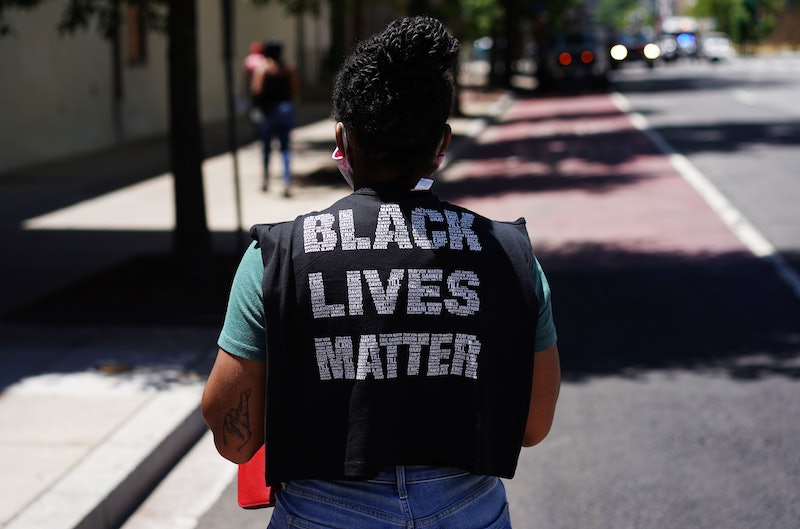 The phrase “Black Lives Matter” should not be a controversial statement, yet time and time again, BLM activists have been disproportionately targeted for exercising their constitutional rights to freedom of speech and to peaceably assemble. And it’s starting to affect Americans at the polls as voters were turned away for wearing Black Lives Matters merch. It begs the question: what can you wear to vote? Well, the answer is complicated.

Last month, CBS News reported that a poll worker in Memphis, Tennessee, had been fired after turning away early voters who opted to wear shirts with “Black Lives Matter” and “I Can’t Breathe” printed on the front. Shelby County Election Commission spokeswoman Suzanne Thompson told the outlet that while Tennessee law doesn’t permit people to wear items that feature explicitly political messages, i.e. the name of a candidate or a political party, a phrase like “Black Lives Matter” doesn’t meet that criteria.

“That was pretty bad,” Thompson told CBS at the time. “They were not supposed to be turned away.”

While completely unconstitutional, it's no surprise that the BLM movement has become unnecessarily politically fraught. Over the summer, during the nationwide protests in response to the killing of George Floyd by a Minnesota police officer, some people singled out BLM protestors and threatened to injure them by driving cars into crowds that had peacefully gathered.

Donald Trump has also repeatedly lied, falsely suggesting that BLM is a violent movement. Yet all the while, he’s actively encouraged his own supporters to resort to violence themselves. With that messaging in mind, people have begun to see Black Lives Matter as a partisan issue when, in essence, it's a human rights issue.

As millions of people head to the polls on Election Day, it’s more critical than ever to know whether you can be turned away for the apparel you choose to wear to go out and vote. Below, find all of the key information to keep in mind.

What can I wear to vote?

While what happened in Memphis was a clear case of the poll worker not understanding their job or the law, that won’t always be how these scenarios play out. Unfortunately, depending on the poll worker, you may be unfairly subjected to scrutiny for what you’re wearing, even if it’s completely within your rights.

“The laws are specific to each state, and they are enforced by poll workers,” Richard Hasen, a political science professor at the University of California, Irvine, told CNN. “What one can wear, and whether other laws might violate the First Amendment, would have to be determined on a case by case basis.”

What can I wear to vote in my state?

Because elections are run by states, where you live is going to determine whether your Election Day apparel could stir up some drama at your local polling place. According to CNN, several states have laws prohibiting apparel that clearly endorses a political candidate: California, Delaware, Kansas, Montana, New Jersey, New York, South Carolina, Tennessee, Texas, and Vermont.

And a few states have upped the ante by regulating accessories and other paraphernalia. For instance, Delaware doesn’t allow buttons, banners, or other pieces that refer to issues, candidates, or partisan topics. “Partisan topics” is certainly vague and open for interpretation, which means that something like a BLM shirt could fall under this category. In California, the list of prohibited items is also pretty expansive: Hats, pencils, pens, shirts, signs, and stickers are all a no-go.

Can I wear a Black Lives Matter shirt to vote?

You may be wondering, “What does my shirt or mask have to do with voting? Why can’t I just wear what I want?” And although you definitely can wear whatever you want, it might not be without consequences depending on your local election laws.

The issue is that sharing information for or against any candidate — whether that’s a flyer, pamphlet, or plain old T-shirt — can be viewed as “electioneering.” That’s just a fancier word for campaigning, and in many states, campaigning of any sort is strictly prohibited at polling places.

If you’d rather not risk waiting in line for hours only to be turned away for what you’re wearing, it’s a good idea to leave the campaign merch — or anything that could be construed as political, even incorrectly so — at home.

More like this
Camila Cabello Wore A Pearl Bra On The 2023 Grammys Red Carpet
By Alyssa Lapid
Lizzo Wore A Spicy Bustier Gown On The 2023 Grammys Red Carpet
By Alyssa Lapid
Taylor Swift’s Glitzy Grammys Look Is Giving Midnights
By Alyssa Lapid
Aerie’s Curve-Hugging Offline Leggings Will Give You A BBL In Seconds
By Bella Gerard
Get Even More From Bustle — Sign Up For The Newsletter
From hair trends to relationship advice, our daily newsletter has everything you need to sound like a person who’s on TikTok, even if you aren’t.