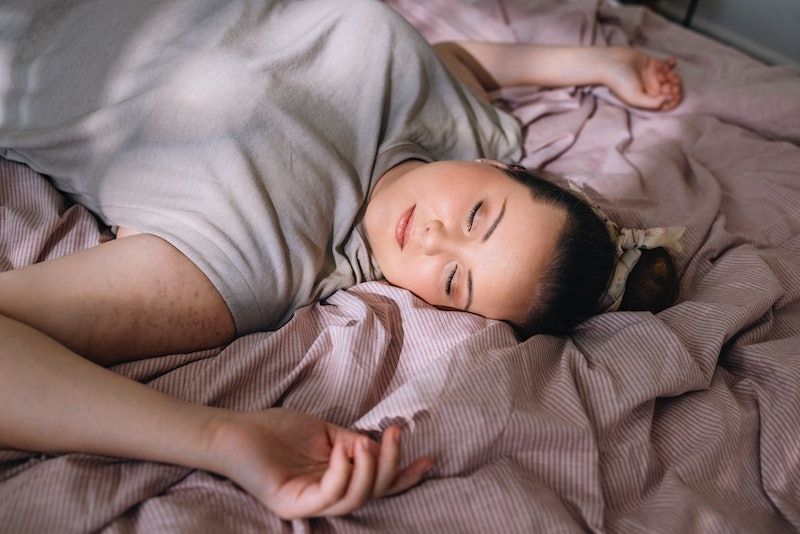 1. You Get The Classic Signs Of Sexual Arousal

Arousal during masturbation will cause everything from a quicker pulse to the rearrangement of the cervix inside the body, retracting slightly in order to help penetration (useful if you're using a toy). And the brain's reward circuit is being bombarded with pleasurable messages, with positive neurochemicals swilling around to provide pleasure, pain relief, and a lasting sense of happiness. When you hit the big O, your brain will feel it: a 2020 study published in All Life found that orgasm can produce an intense collection of neurohormones, including oxytocin, endorphins, serotonin, and dopamine, and Dr. Greves says they’re a key part of that toe-curling pleasure.

2. The Imagination Center Of Your Brain Switches On

Back in 2011, New Scientist reported on two competing studies documenting the brain at the moment of orgasm, which seemed to show two very different patterns. So far, so confusing. But it turned out that the studies had one crucial difference: in one, the subjects were being aroused by their partners, while in the other they were solely responsible for their good vibes.

This intense cocktail of brain activity may lead you feel as if you’ve just come from a day at the spa. “The short release of endorphins may provide stress relief, and positive feelings may come because endorphins are neurotransmitters that do just that,” Dr. Greves says. As well as being extremely distracting, she says, this neurochemical cocktail may make your worries float away.

The whole of your brain gets involved with this feeling. A study published in Journal of Sexual Medicine in 2017 found that self-induced orgasms (done by women on their own) stimulated a whole plethora of brain regions, including the sensory areas, the bits that give you feelings of reward, those related to memory, and even the brain stem.

A 1985 study from Rutgers University found that women who were stimulating themselves to orgasm with a specially designed vaginal toy became much more capable of dealing with pain as well as detecting it. While they were masturbating, pain tolerance increased by 74.6% and their ability to detect pain increased by 106.7%. The 2017 Journal of Sexual Medicine study confirmed this, and found that the pain relief of self-induced orgasms likely has to do with all the brain regions it lights up. When you’re orgasming, your brain produces serotonin, which helps with pain. The 1985 researchers thought pain thresholds rose because the female brain ‘went to sleep’ during orgasm, but it turns out it’s actually very awake, working to block off any aches.

6. You Strengthen Your Pelvic Floor

It’s not just your pelvic floor that will start to tense. “Other muscles may become tense to prepare for the orgasm,” Dr. Greves says. That includes your leg and stomach muscles. Heck of a way to get a six pack.

More like this
My Partner Wants Me To Wear A Diaper During Sex. Help!
By Sophia Benoit
18 Hinge Prompt Answers To Try If You’re Looking For Something Casual
By Lexi Inks
12 Active Date Ideas That'll Get You & Your Boo Outside
By Lexi Inks
10 Primal Movement Exercises That'll Improve Your Mobility
By Carolyn Steber
Get Even More From Bustle — Sign Up For The Newsletter
From hair trends to relationship advice, our daily newsletter has everything you need to sound like a person who’s on TikTok, even if you aren’t.

This article was originally published on May 4, 2016