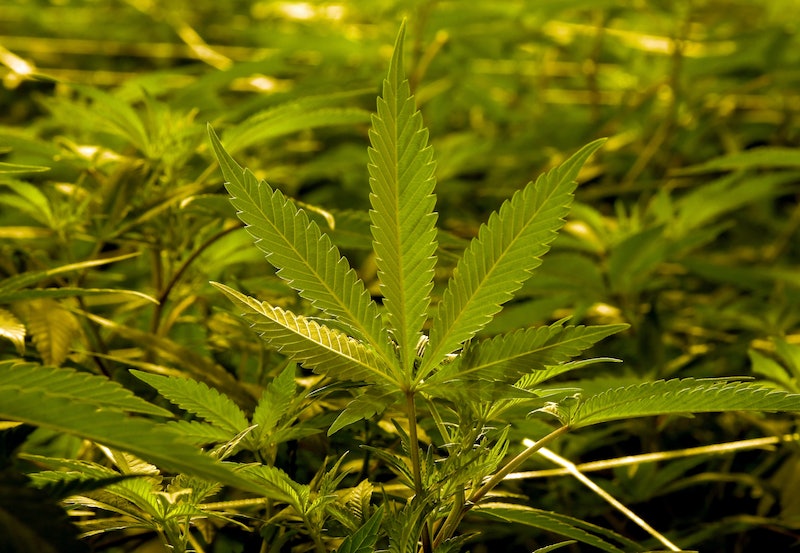 Other than the traditional act of smoking marijuana, these days, users can vape, bake edibles, and use topicals or tonics to get high in states where THC consumption is legal. Body lotion and chapstick with cannabidiol (CBD) exist, too, to deliver purported relaxing effects without the high. But not all methods of getting stoned are as good as others. In fact, there are some that might be outright dangerous. Ever heard of dabbing?

Dabs are highly concentrated doses of cannabis, and they're often made at home by by placing marijuana trimmings into a glass or metal pipe and blasting them with butane to extract THC from the plant. The result is a thick, sticky substance that resembles hardened candle wax. This substance, also called butane hash oil (BHO), is then smoked using a bong or pipe, giving an extremely potent high. Because of this high and the possible danger of extracting it, experts urge caution when creating and using dabs.

"The number one reason amongst users of dabs of why they prefer to regular marijuana inhalation is because it gives them a faster more intense euphoria or 'high,'" Dr. Niket Sonpal, an internist, gastroenterologist, and adjunct assistant professor of clinical medicine at Touro College, tells Bustle. "It carries the same risks as smoking, only more pronounced, and the effects can happen quicker."

Basically, dabbing carries a lot of health risks that potential users should know about before considering it.

1. You Could Severely Burn Yourself During The Extraction Process

The extraction process requires everyday folks to use butane, which is a highly volatile, unpredictable, and dangerous gas. A 2015 study about the health risks of dabbing published in the journal Pediatrics found that it's all too easy to obtain severe burns and injuries in the creation process. Butane can heat up the metal or glass used to extract THC so high that any body parts that come into contact with the materials can be burned in the blink of an eye.

"This can lead to other concerns besides the increased THC exposure, namely intense burns and even fires," Dr. Sonpal says.

2. It Could Harm Other People As Well

Not only is the primary user subject to getting injured by using butane to turn marijuana into dabs, but they also run the risk of starting a fire. In November 2013, a man caused an explosion in his apartment building while using butane to extract dabs, and was ultimately sentenced to nine years in prison.

3. The High Is Extremely Powerful

To give you a sense of how strong dabs are, two nicknames for dabs are "shatter" and "pot on steroids." Dr. Dustin Sulak, a licensed osteopathic physician in Maine who legally dispenses marijuana, told Healthline, "A single inhalation of concentrate delivers the THC and other cannabinoids equivalent to three to 10 inhalations of herbal cannabis, depending on the potency." The danger lies in the fact that doing dabs slams your system with this concentrated high in one fell swoop.

4. It May Increase Your Tolerance To Marijuana

The potency of dabs is more of a concern than potentially blowing up your house during the extraction process. Dabs have such a strong dose of THC, administered so suddenly, that your body becomes accustomed to high levels of THC and your tolerance increases rapidly.

"This is because the cannabinoid receptors are saturated by the increased concentrations and thus your next intake will be more difficult to achieve the same high," Dr. Sonpal says. "In other words, patients will need large amounts to feel any high at all and, even worse, they may fail to get high from herbal cannabis at all after your body gets used to dabs."

You might also experience more of the potential side effects that come with THC and frequently getting high.

"Paranoia, psychosis, anxiety, and hallucinations are well-known side effects of inhaling weed," Dr. Sonpal says. "Symptoms of vomiting can also occur and I have seen patients with cannabinoid hyperemesis syndrome (CHS). It can occur with chronic marijuana use, and more specifically, after someone has quit. However, with dabs I have had patients who develop the withdrawal-like symptoms of CHS only after a short exposure."

6. You May Be Unknowingly Ingesting Other Hazardous Chemicals

The equipment used for the extraction process may contain nasty ingredients that will eventually make their way into your system. For example, the metal in the rig utilized to make dabs could have rust and solder in it, which will inevitably end up in your BHO and into your body. Smoking these unknown chemical contaminants could cause health hazards, such as respiratory issues, in the future.

At the end of the day, dabbing can be risky. "The only true way to mitigate these effects is the avoidance of dabs," Dr. Sonpal says, adding that more research needs to be done to full understand the effects of THC and other cannabinoids on the body. "When it comes to dabs, it is just simply too hard to moderate as the concentrations are very very high." Moderation and safety is key, Dr. Sonpal says, which is sound advice no matter the activity.

More like this
This Psychological Effect Might Be Keeping You From Hitting Your Goals
By Lexi Inks
Got Brain Fog? Here Are The Best Supplements For Memory & Cognition
By Carolyn Steber
I Tried The Air Up Water Bottle, Which Flavors Your Drink With Scents
By Carolyn Steber
How Yin Yoga Delivers TLC To Tight Muscles
By Carolyn Steber
Get Even More From Bustle — Sign Up For The Newsletter

This article was originally published on Aug. 3, 2016