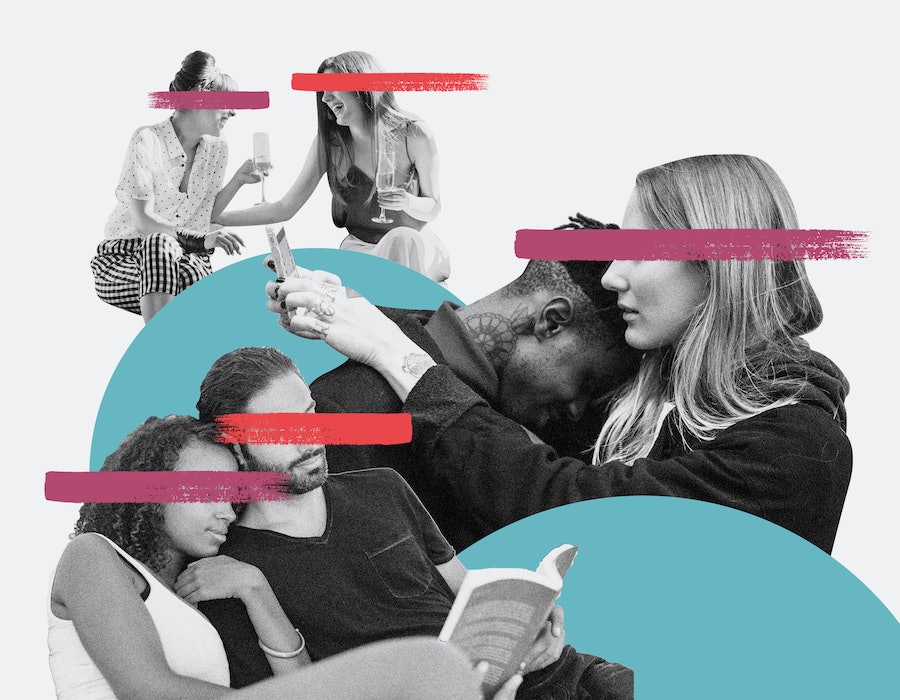 You’ve probably heard it before: Having a crush while you’re in a relationship is no big deal! Vanessa Marin, a psychotherapist who specializes in sex therapy, agrees. While we could all stand to normalize crushing more — just because you’re dating someone doesn’t make you immune to having chemistry with anyone else — crushes exist on a spectrum, and they’re not all totally harmless. “There are different shades of crushes,” Marin says. “And you definitely can get into a potentially dangerous zone.” Below, a breakdown of that spectrum, and the risks different crushes can create:

Kristie, 28, from Los Angeles, has a crush on a character from a book.

Kristie has always considered herself very in touch with her emotions, which is perhaps why when she read Sally Rooney’s novel Normal People, she instantly connected with Connell, one of the brooding lead characters. And although she’s happy with how things are going with her boyfriend of one year, she does wish he could be more expressive and unafraid of his feelings, like Connell. But as far as crushes go, Marin says this one is pretty low stakes. It could even be a positive thing, she adds, since it’s allowed Kristie to identify qualities that are desirable to her in a relationship — qualities she can in turn share with her partner, as she’s done in the past. Marin cautions, however, to be aware of the limitations of real humans compared to fictionalized characters: “Sometimes characters in books do or say things that just aren't super realistic to expect from partners.”

Lana, 30, from Vancouver, has a crush on Michael Keaton.

Lana, who recently got engaged to her fiancé, whom she’s dated for four years, has had a thing for the actor Michael Keaton ever since she first saw him in the 1998 movie Jack Frost. And be it in Birdman or Batman, or even in full-on decayed-corpse Beetlejuice makeup, she finds him undeniably sexy. Plus, she says, he just seems down to earth in his interviews. She jokes about her minor Michael obsession with her fiancé but has considered that verbally oversharing your lust for anyone, especially an “old man,” could be a blow to the ego — or at least annoying to your partner. Marin, however, urges us to take it easy on ourselves with celebrity crushes. (Who among us hasn’t had one?) She gives Lana kudos for being open about it with her fiancé, adding, “The secrecy behind crushes is often what can be far more damaging.” And if you’re worried about oversharing, she suggests bringing it up about half as often as your harmless crush pops into your head. Aka maybe save your out-loud swooning for every other TV appearance your celeb crush makes.

Rebecca, 31, from New York, has a crush on her girlfriend’s rugby teammate.

Rebecca and her girlfriend of about a year have always had a relationship grounded in open communication. When it comes to crushes, they both acknowledge it’s a normal human emotion, and they’re not afraid of sharing them with each other. So when, about six months into the relationship, Rebecca felt pangs of attraction while she and her girlfriend were hanging out with one of the latter’s teammates, they both treated it with a lighthearted laugh. Her girlfriend, Rebecca says, still teases her about the crush. One potential concern she shares is how someone might perceive their partner having a crush on someone with a different body type, which she believes could be exacerbated if the partner has had body image or gender identity struggles in the past. And although a crush on a shared acquaintance could be more serious than a character or celebrity, Marin thinks it’s wonderful they’re able to joke about it. Marin counsels us all to remember that most people don’t have one specific body type we’re drawn to, so we should try not to be too self-conscious about our partner’s harmless infatuations. But if you’re looking to counter any of your partner’s insecurity, she advises giving lots of specific compliments about their body and your attraction to them.

One year into her marriage, Liz is happy with her relationship, but she admits that sometimes long-term relationships can dull the feelings that make crushes so fun: a desire to impress, the thrill of flirting, excitement about something new. She thinks this was likely at play when she hit it off with a man she met on a press trip for work two summers ago. Since their flights were both a day later than the rest of the group, they found themselves with extra time to spend together, which helped ignite their spark. They stayed in touch after they got home and sent regular emails. She found herself checking Instagram to see if he’d viewed her Stories right away, thinking about him at dinner with her husband, and drafting her next email in her head. Ultimately she decided the crush was taking up too much mental real estate and slowed her communication. But the familiar feelings keep coming back whenever they get back in touch, roughly every week or so. Marin sees this type of crush as an escalation in severity, especially with the daydreaming. The risk here, she explains, is that you can get lost in the fantasy of a crush and neglect your partner, which can strain your ability to connect. But Marin also sees this as an opportunity: “It's easy to settle into our routines and take our relationships for granted,” she says. “But she can try to take that energy we bring to our crushes and see if she can funnel it into her relationship with her husband.”

Early this year, a few months after a new guy started working at Danielle’s company, she developed feelings for him. Soon after, he revealed that he returned her feelings. Now, Danielle is at a standstill. Not wanting to hide her crush, she disclosed it to her husband of one year, and since then, they’ve both been frustrated. Danielle finds herself thinking about her co-worker all the time, despite a self-imposed ban on communication outside work. It’s starting to affect her overall mood; she feels more withdrawn when she’s usually upbeat, and her husband has noticed. She knows she should stop spending time with him at work — they often find excuses to chat — but she doesn’t, which fuels her cycle of guilt and frustration; ultimately she doesn’t want to leave her marriage. Marin notes this kind of emotional affair can cause potentially harmful distance in a relationship, especially if it’s interfering in daily life, as it is for Liz. If both parties aren’t philosophically on board with an open relationship, then getting more space is key. Marin advises that if staying partnered is the goal, you should tell your crush outright that you need to cut back on communication so that you can give yourself time to get over it. But even in a serious crush, it’s important to have empathy for yourself. “A crush is always going to seem more enticing than a real relationship, because we get to have this fantasy picture of what our relationship with a crush could be. [We think] it would always be so hot, sexy, and alluring,” Marin says. “Whereas real relationships are messy and complicated.”