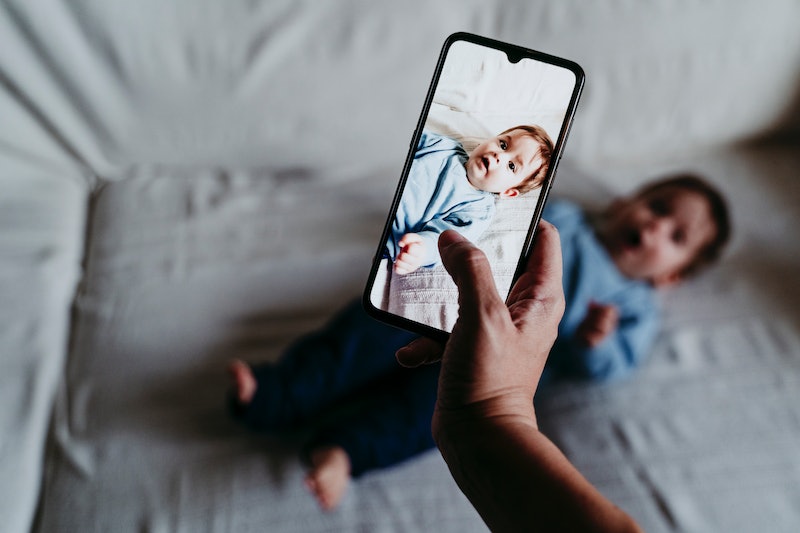 Baby fever is spreading fast this holiday season, at least on the For You page. In between more standard present requests, like Chelsea boots or AirPods, TikTokers are asking their partners for babies for the holidays. The videos often present themselves as innocuous wish lists, where images of sweatpants or purses are interspersed with quick shots of, well, babies, almost like subliminal messaging. Though the TikToks aren't intended to be serious, the hashtag #babyfever is nearing a billion views on TikTok, suggesting the trend goes beyond the joke.

Kirby Long's TikTok of her own baby-centric wishlist went viral after she posted it back in September. "My husband thought it was hilarious," the 22-year-old tells Bustle. "I got a very mixed reaction from my audience though," she says of her 99,000 followers. "Some people thought it was funny while others thought I was being pushy."

Other TikTok formats also lend themselves to expressions of baby fever. A video of @crystal.irish's baby having her cheeks squished amassed over 10 million views on TikTok since it was uploaded in March. In the recent comments, one viewer says, "I can't wait until I can have my own!" Another writes, "She's so cute, I want one!" Hundreds more comments make reference to their users' scorching ovaries.

If you've ever seen a cute baby and immediately felt your ovaries explode, there's a biological mechanism at play, though not the one you're expecting. Baby fever isn't an indication that your biological clock (which is not real) is sounding an alarm that you must have babies, stat; it's a psychological reaction with fleeting effects.

Marian Rissenberg, Ph.D., a neuropsychologist, tells Bustle that baby fever is a "hormonally driven biological imperative." While it's common, it "is certainly not rational," meaning it doesn't indicate one's readiness for or interest in parenting. A series of reactions in the brain — the release of the hormone oxytocin, a change in blood chemistry, and other potential subconscious thought associations — set off that baby fever feeling, in women more commonly than men.

Neuropsychologist Dr. Sanam Hafeez, Psy.D., adds that this reaction can be triggered from simply looking at a picture of a baby or watching a TikTok, rather than seeing a baby IRL. Oxytocin, nicknamed the "love hormone," is linked with maternal behaviors and emotional bonding, so when it's pumping through your system, you might feel warm and fuzzy on the inside.

Why is baby fever trending now, though? Hafeez says that the holiday season is "prime baby making time," referencing a study published in the Journal Obstetrics and Gynecology that suggested couples have better luck conceiving in the winter. She adds that the appeal of "creating new life" in a year when people are looking for "renewed hope" is perfectly logical. "Babies give pure love, pure joy which most are searching for, especially in this time," Irish, the TikToker with the viral baby video, tells Bustle, adding that she thinks #babyfever is "spiking" right now due to an increased focus on home life.

If the fact that you can't escape baby fever content is confusing you about your family-starting timeline, know that it doesn't mean your biological clock is running out of ticks. Your brain is just doing what it's programmed to do: go ga ga over cute things.

More like this
30 Clever Ways To Slide Into Your Crush's DMs
By Griffin Wynne, Carolyn Steber and Lexi Inks
Hinge Added A Video Prompt Feature, So Get Your Camera Rolling
By Hannah Orenstein
Here's Why Your Knee Hurts When You Bend It
By Carolyn Steber
The Spiritual Meaning Of Angel Number 000, Explained
By Kristine Fellizar
Get Even More From Bustle — Sign Up For The Newsletter