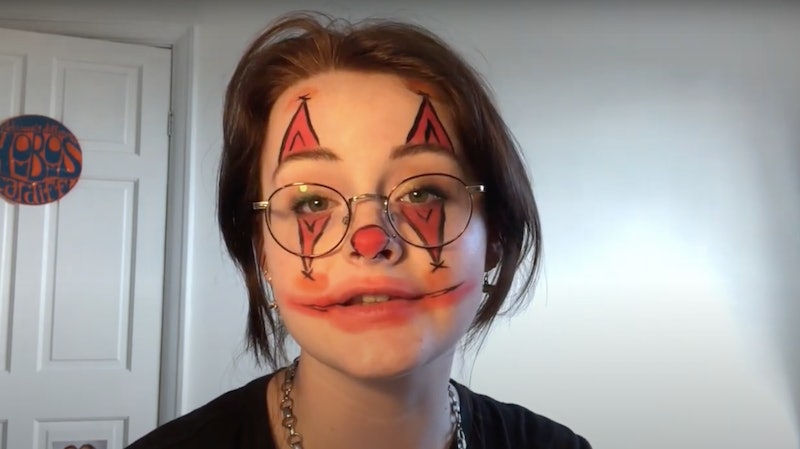 Amelia, 18, was having a bad day. She had recently dropped out of school, was drifting from friends, and had failed her driver's test. After getting dumped by her then-boyfriend, she decided to take matters into her own hands — by transforming herself into a clown, while the internet watched. Inspired by TikTok's "Becoming A Clown Because People Keep Clowning Me," a viral trend in which users paint their faces while telling self-deprecating stories, Amelia stared blankly into the camera and recounted the string of painful events, all the while adorning her face with big triangles, a red nose, and an overdrawn smile.

"The 'Becoming A Clown' meme means you’ve been made to look like a fool," Amelia tells Bustle. "Putting on the makeup and making it into a joke [can allow] people to laugh at the absurdity of situations."

Like many challenges that go viral on TikTok, the exact origins "Becoming A Clown" or "Who's The Clown Now?" are difficult to trace. In 2019, clown memes began flooding Instagram and Twitter feeds, and "Clown Check" videos emerged on TikTok and YouTube — to much critical acclaim. Mashable deemed 2019 the year of both "dating-clownery memes" and "Clowning For Love," defining "dating-clownery" as foolish and potentially-emotional harmful behaviors, like investing in people who aren't actually looking for a relationship, texting your trash ex, or pretending you're "totally cool!" when you're actually upset.

Turning yourself into a clown means recognizing what you are doing and giving yourself a reality check.

But "Becoming A Clown" is a much darker iteration of clowning around. The trend itself requires users to degrade themselves in a public forum, to relive heartbreak and betrayal, all for the validation of views and likes (not to mention that 41% of TikTok users aged are between 16 and 24). But Dr. Nicola Fox Hamilton, cyberpsychologist and lecturer at Dún Laoghaire Institute of Art, Design, and Technology, tells Bustle that the trend possesses a certain vulnerability that can be cathartic.

"When people share [painful] events or share negative emotions through social media, it can lessen the negative mental health effects, increase social support, and increase satisfaction with life," Dr. Fox Hamilton says. "It can be beneficial by allowing people to discuss things and seek support from others."

Take TikTok user, Chloe,* 19. When the boy she'd been seeing for over a month told her he wasn't looking for a serious relationship, she was devastated. But when she received a late-night text asking her to hang out, she decided to see him anyway.

"I was explaining where I was going to my roommates, and we all had this 'Really, girl?' moment," she tells Bustle. "So, we got to work."

Chloe says her decision to "Become A Clown" on TikTok was derived from a desire to acknowledge that she deserves more from the people she dates. By painting her face, she was declaring to the world that she was no longer willing to put up with disrespectful behavior.

"Turning yourself into a clown means recognizing what you are doing and giving yourself a reality check," Chloe says. "You make the situation yours."

Dr. Fox Hamilton agrees that communicating your emotional state online can give you a sense of disinhibition, or feeling more open to saying things you might not say or do IRL. While this can sometimes lead to trolling or cyberbullying, being virtually vulnerable can also help people feel comforted, reassured, and less alone in their feelings.

TikToker Madyson, 18, echoes Chloe's interpretation of the trend. For her, "Becoming A Clown" was a welcome reminder to prioritize her own well-being, creating healthy boundaries and expectations for future partners. In fact, after Madyson shared her story, hundreds of people reached out to her with similar tales of rejection.

"'Becoming A Clown' represents how you look and feel when you let your guard down for someone who isn’t worth it," Madyson tells Bustle. "It gives you a sense of peace and empowerment. It really makes it a lot easier to get over [a breakup]."

But why — of all things — a clown? Dr. Fox Hamilton explains that using vibrant imagery can be an effective way to process traumatic experiences. Moreover, approaching sensitive experiences with humor (by evoking a court jester or a royal fool) can help reduce shame.

'Becoming A Clown' is a visual way of saying 'this does not define me and I will not let it bring me down.'

"'Becoming A Clown' is a visual way of saying 'this does not define me and I will not let it bring me down,'" content creator Emily, 21, tells Bustle. "It takes power away from the hurtful message and from the perpetrator."

And for some, connecting with others who have gone through similar situations can really shed light on their experience, providing them with a fresh perspective. Like Jordan, 20, who didn't fully process being cheated on by her partner until her video blew up on TikTok. She tells Bustle that the hundreds of thousands of views her video received validated her feelings, which helped her feel less "at fault" and ashamed of "getting clowned." In retrospect, the video was a form of performance art, but also felt therapeutic.

"It's so easy to place blame on yourself, but why are you going to keep dragging on yourself for somebody else's mistakes?" she says. "Maybe the person who did you wrong is the clown."