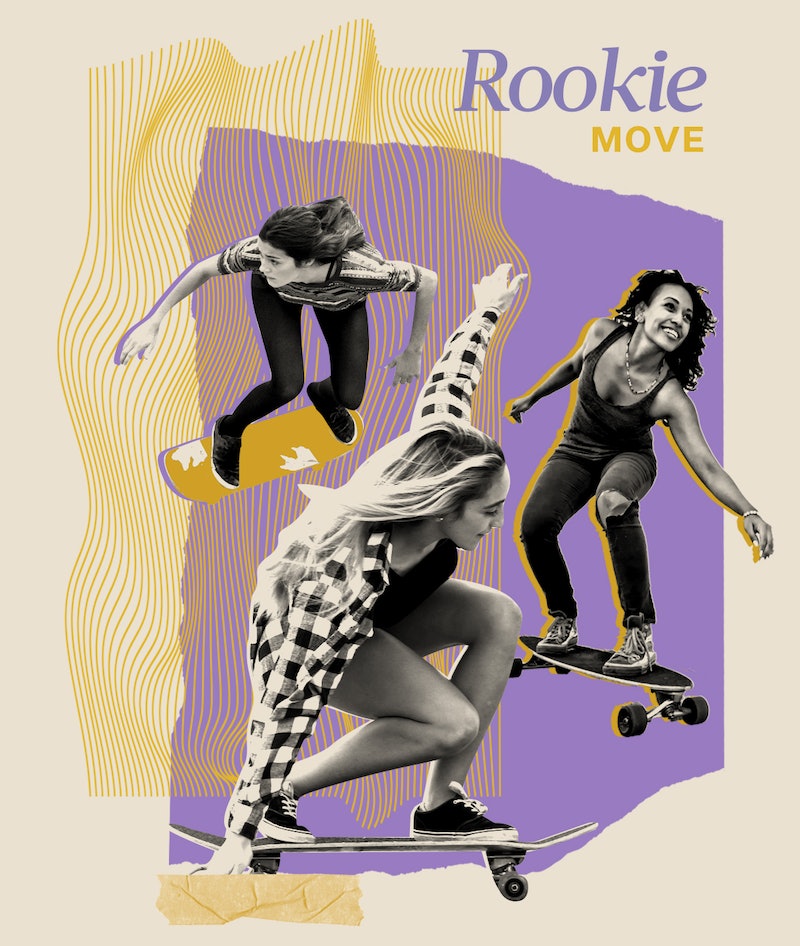 In Bustle’s new series Rookie Move, we ask fitness experts to share their best advice for first-timers — because if you know, you know (and now you do).

Perhaps skateboarding has caught your eye recently: It was one of four new sports in the 2021 Summer Olympic Games in Tokyo, and it seems safe to say it was the only sport at the games this summer to feature athletes wearing jeans, stylish sneakers, and AirPods during competition. Also, a literal 13-year-old — Momiji Nishiya of Japan — won gold in the women’s street skateboarding event. How hard could this be?

It turns out there’s more art to skateboarding than a rookie might expect; in a recent interview with Bustle, Kevin Banahan, the co-founder and executive director of SkateYogi in Brooklyn, compared it to dancing. “There’s a creative element to it,” Banahan says. “When you’re skating, you’re in this flow state — time slows down, but it also speeds up. You feel really alive and present. It’s the kind of thing I think other people find through other creative pursuits, like art or music.”

Here’s what the skateboarding curious reader needs to know about skate park etiquette, the importance of patience, and the shoe choice that makes Banahan cringe.

This surprises people, Banahan says, but running shoes make for terrible skate shoes. The grip that makes running shoes great for logging miles around the city work against you on a skateboard because it means you won’t be able to easily move your feet around. “It kind of locks you into position,” Banahan says. “Whereas a flat sole sneaker — ones that are either designed for skateboarding or just happen to have flat soles — you can move around much easier.”

A really worn out pair of running shoes might be fine, he added, but you can also consider this your excuse to buy a new pair of Vans.

You wear a bicycle helmet.

Good job on wearing a helmet, first of all, but Banahan doesn’t recommend a bike helmet. “They don’t block those forward falls you tend to get into on a skateboard,” he says. Instead, he suggests a “bucket style” helmet: anything that has that smooth top, the kind that looks a little like a turtle shell. (It’s interesting, isn’t it, that the correct option for skateboarding tends to also be the more stylish option?)

You don’t know what kind of skateboarding you want to do.

Are you envisioning yourself running errands on a skateboard? Or do you see yourself at the skate park doing tricks? “You’ll want a different board depending on how you answer that,” Banahan says.

If you’re just wanting to use the skateboard to get yourself from point A to point B, you want a cruiser board — it has softer wheels, which will keep the ride smooth despite any cracks in the sidewalk. (A cruiser also has a slightly easier learning curve, for what it’s worth.) If you want to be a skate park skateboarder, on the other hand, you’ll need a standard trick skateboard.

“When you’re skating, you’re in this flow state — time slows down, but it also speeds up. You feel really alive and present.”

Really, though, the most important advice Banahan has here — beyond knowing what sort of skateboarding you want to do — is to visit your local skateboarding shop instead of trying to figure it out for yourself by ordering something online. Swallow your pride and ask the dumb questions; you’ll more than likely be rewarded with kindness and useful answers.

You assume your only options for skateboarding teachers are either YouTube or a cool teen.

There are skateboarding schools! Did you know that? They aren’t in every city, true, but they’re starting to pop up, so it’s worth a quick Google, Banahan says.

“Me, personally, I started skating in the ’90s — it was all self-taught. You got a board and you just figured it out,” he says. “So there’s nothing wrong with doing that, and probably most people out there skating, even the really good ones, that’s how they learned, and then they found their tribe and taught each other.” But if you do have access to a skate school, it’s a good step for beginners — you won’t have to buy all the gear, for one, and it’ll also keep you from developing bad habits that could get you injured.

You expect to simply hop on and get moving.

On some level, sure, you recognize it’s going to take some time to get to the tricks-and-jumps level of skateboarding when you’re brand new to the sport. But you might be surprised at how long it takes to learn how to simply maneuver the board at all.

“If you’re talking about going from having never ridden a board to being comfortable pushing, turning, stopping — maybe not tricks, but they know how to ride a skateboard and they’re comfortable getting around — I would say that can take anywhere from one month to a couple months,” Banahan says. That all depends on your natural athletic ability and how often you practice (Banahan recommends at least two to three times a week if you really want to improve). Better to start by assuming it’s going to be a little challenging to move around on the board, and go from there. Sometimes, low expectations are key.

More like this
Here's How Cardio & HIIT Affect Your Body Differently
By Carolyn Steber
My Honest Review Of Rumble Boxing
By Carolyn Steber
The Benefits Of Doing Adduction Vs. Abduction Exercises
By Carolyn Steber
This Psychological Effect Might Be Keeping You From Hitting Your Goals
By Lexi Inks
Get Even More From Bustle — Sign Up For The Newsletter