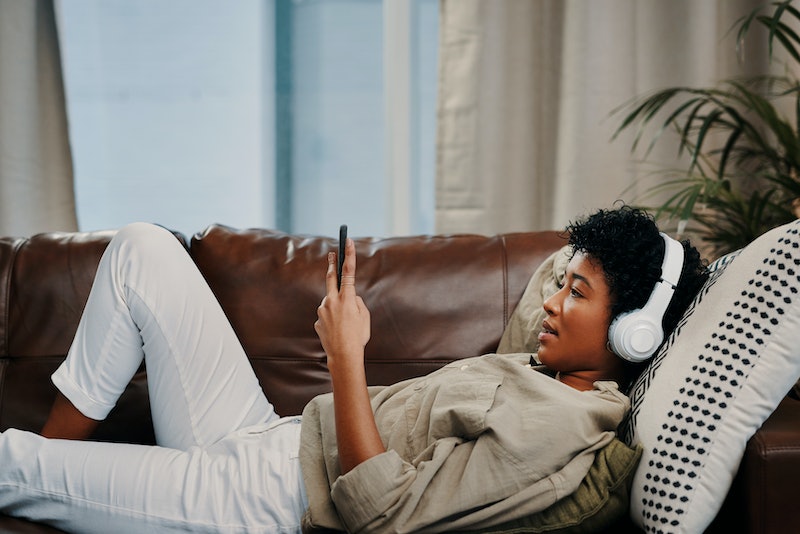 If you deal with migraines, the concept of listening to music as a pain reduction tool might sound absurd. Up to 80% of people who get migraines report sound hypersensitivity — one of the most common symptoms of the condition. As someone who has been dealing with chronic migraines for over 10 years, I can confidently say that silence is the only thing I want to hear when my head is thumping. But according to page views and claims on YouTube videos and Spotify playlists, people are listening to music to reduce migraine pain.

On YouTube, videos with titles like "Instant Migraine Relief" and "Headache Soothing Beats" have millions of views. On Spotify, there are playlists and podcasts solely devoted to "Natural Migraine Relief" that feature a mix of ambient, electronic, and classical pieces. One feature the majority of these tracks have in common is binaural beats. The term refers to the auditory illusion that's created when you listen to two tones of different frequencies, one in each ear, and the combination of slightly different tones causes the brain to "hear" a third tone in the middle. The brain responds to this by syncing its activity in both hemispheres — a phenomenon called neural entrainment. Though this might sound like a powerful influence, one that could affect thought process, emotion, and cognitive function, there's actually very little evidence to show it does anything.

While the sounds can be relaxing to listen to for some, Dr. Alexander Mauskop, M.D., director and founder of the New York Headache Center, thinks the trendy videos are misleading. What's more, he finds them "horribly annoying" to listen to. "Binaural sounds have no scientific basis, no studies prove they work for migraines, so I do not recommend them for people who are currently experiencing a migraine," Mauskop says, adding that he believes most people would not be able to withstand the sounds for long anyway.

Mauskop doesn't scoff at all sound therapy, however. Despite the fact that hypersensitivity to sound might turn migraine patients off to music in the throws of an episode, Mauskop says "studies that prove pleasant music relieves pain more effectively compared to patients who sat quietly listening to nothing for 20 minutes." Why? Because music that you, personally, find to be soothing could minimize the effects of a migraine's wrath on your body through a series of de-stressing reactions. If you are able to release your muscles, soften your posture, and allow yourself to have an enjoyable listening experience, the music can have a healing effect.

But it's not just about being relaxed. "Music causes changes in the brain. We are still trying to understand it, but it's not just its relaxing qualities," Mauskop says. "I tell patients to listen to whatever music they enjoy, though classical, ambient music works best for most, I've had a patient tell me that listening to hard rock helped to relieve migraine pain, so it's more about your personal reaction to it."

In terms of the long-term effectiveness of music therapy on migraines, Mauskop says that additional research is still required, but various studies show that music can reduce the intensity and frequency of migraines when used therapeutically.

"What studies do show is that people who listen to pleasurable music feel less pain," Mauskop explains. So if you happen to like the sound of binaural beats and frequency specific songs, it could be helpful, sure. But if you want to give music therapy for migraines a real shot, Mauskop says to queue up music you actually love and follow your instincts. If music feels unpleasant or is worsening the effects of your migraine, tap out.