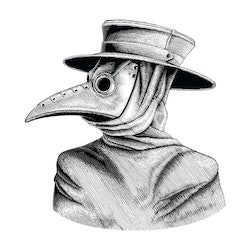 Every so often, bubonic plague pops up in the news — in the last week, a case was reported in Upper Mongolia, and another in a Colorado squirrel. The response was, understandably, panicky. On top of coronavirus, do we now have to worry about the plague that wiped out millions of Europeans throughout the last millennium, too? The answer, epidemiologists and global health experts tell Bustle, is no.

"Understandably, learning about the recently-diagnosed cases of plague in Mongolia may cause some anxiety – but don’t panic!" Dr. Felicia Nutter, DVM, an assistant professor of infectious disease and global health at the Cummings School of Veterinary Medicine at Tufts University, tells Bustle. This isn't an extinct incurable disease roaring back from the dead. It's just, well, something that regularly happens.

Dr. Dominic Travis, DVM, an associate professor at the department of veterinary population medicine at the University of Minnesota, tells Bustle that the bubonic plague is famous for its major symptom: swollen lymph nodes, or buboes. He says it's a bacteria, and usually spread by flea bite. "There is a natural cycle between rodents and fleas, and when rodents die, fleas jump off and look for other hosts, so it sometimes spreads to other small mammals, and sometimes humans." It's not known how many animals get plague per year, but it's really, really rare in humans.

Bubonic plague is not a pleasant illness. Dr. Travis says that when you're bitten by an infected flea, the bite is drained by the lymphatic system, which flushes out waste from the body, and that's how infection starts to spread. The plague then gathers in the lymph nodes. You can feel them under your neck, armpits, and in your groin. In people who've contracted the plague, the nodes swell and become infected. Without treatment, it can be fatal. If the bubonic plague develops into septicemic plague, tissue can die and blacken, hence the term "Black Death." There's also another type of plague known as pneumonic plague, which affects the lungs, and is far more likely to cause death than bubonic plague if left untreated. But getting the plague is vanishingly unlikely.

Bubonic plague is also completely curable. Pre-renaissance Europeans didn't have penicillin, but luckily enough, we do. New vaccinations for the bubonic plague are in late-stage testing, but the illness is so rare that the World Health Organization only recommends vaccination for people who are almost guaranteed to be exposed to it, like laboratory workers who test samples of infected people and animals.

One case of bubonic plague isn't anything worry about, but it's understandable that the news cycle is focusing on it, Dr. Travis says. "This is just one small cluster at most. This is not a virus that spreads like COVID-19; the signs are easy to see." Unlike coronavirus, which spreads through coughs, sneezes, and possibly even breathing, plague is transmitted either through flea bites or by encountering the fluids of an infected animal, like their blood. Veterinarians occasionally contract the bubonic plague by handling infected creatures, Dr. Travis says. "If you live in or are traveling to places where plague is known to occur, you can take simple steps to reduce your risk and also to be aware of what symptoms warrant a visit to your doctor," Dr. Nutter says. Use rodent repellent to keep rats who may be carrying fleas away from you, avoid all dogs and cats, and treat your clothes with flea repellent.

Plague is not a big, bad threat. "We know what causes it, there are steps that can be taken to reduce the risk of contracting it, and it can be treated with antibiotics if properly diagnosed," Dr. Nutter says. So you can stop having nightmares about those plague doctor masks — though they could be good to keep others at a proper social distance.