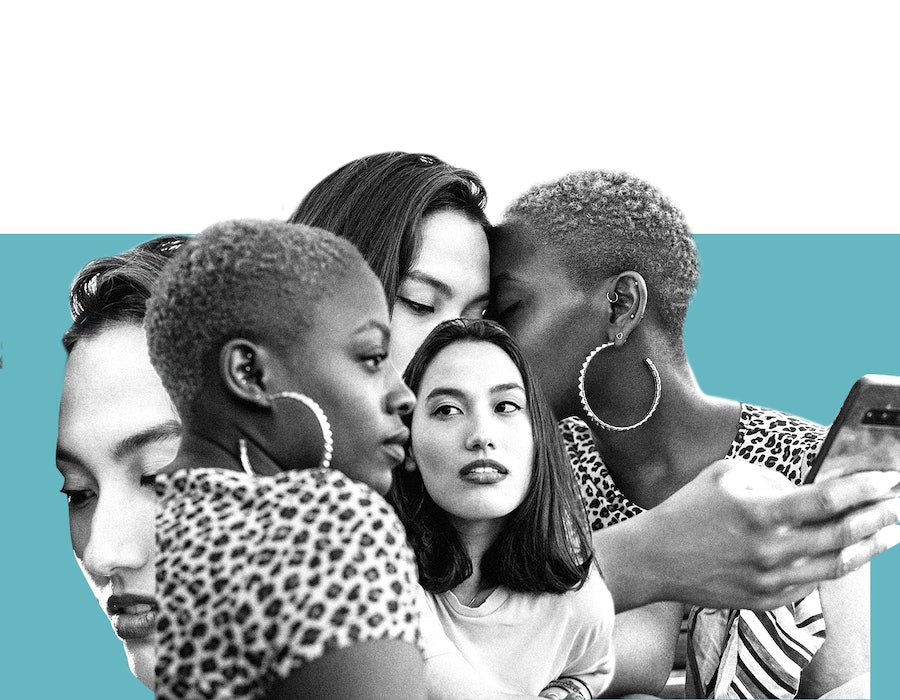 This week, Bustle's exploring the many facets of cheating and what infidelity looks like today.

In early March, Lauren, 23, and her boyfriend of two years came home from a cruise in the Bahamas right as coronavirus began to spread, so they decided to quarantine together in Athens, Georgia, where she was in school. One day, she heard him watching porn in the bathroom, and because “he always seemed to be sneaky with his phone,” she decided to look through it, discovering he'd saved nudes from a woman on Snapchat — someone he went to high school with. Lauren confronted him, then packed her bags and moved in with her parents a few cities over to ride out the rest of the pandemic.

“He said he didn’t think it was a big deal since he didn’t act on it — it doesn’t mean he’s any less attracted to me, but he’s a guy and it’s ‘natural,’” Lauren says. “But it made me feel like sh*t. I felt so insecure and unwanted.”

Plus, it wasn’t the first time her boyfriend had exhibited disloyal behavior — back in October, he’d sent a flirty message to one of her friends on Tinder, and a week before that, Lauren recalls finding another girl’s shirt in his bed. There were other problems, too, like that they were cooped up during quarantine “24/7 together and would only have sex once a week.”

The pandemic has been tough on relationships, whether you’re single and haven’t touched another human body in 90 days or find that all that time spent cooped up inside with your significant other has led to needless bickering or worse. It’s no wonder that in early March, as soon as lockdown restrictions eased in Wuhan, China, divorce rates spiked. Tensions are high as people try to stay healthy, cope with financial uncertainty, and reckon with the grief provoked by recent incidents of police brutality. This heightened anxiety can exacerbate issues in relationships, too — and, in some cases, result in infidelity.

“She had been the one pushing to move in, and then as soon as we moved in, a flip switched.”

“Whatever was going on in the relationship before now is getting intensified under the stress and pressure of coronavirus,” explains Melorra Sochet, a licensed clinical social worker who provides psychotherapy for individuals and couples. “If someone had a propensity not to commit or to not be fully present in their relationship, that’s going to be exaggerated now. And one of the ways it could show up is through affairs or online exploration.”

According to Ashley Madison communications coordinator Erin Leite, online affairs have spiked in the past few months, with 17,000 people joining the site each day to seek virtual connections instead of risking meeting up with paramours in real life. “Whether these relationships become sexual or not, we find that our members benefit from having someone to talk to who understands the tension they may be feeling while stuck at home with their spouse,” Leite says.

Sochet believes that physical cheating, right now, “is beyond a dealbreaker — in a pandemic, to physically cheat is basically saying, ‘I’m willing to risk your life.’” But “virtual cheating,” via sexting or DMing nudes with someone outside your relationship, while a more gray-area offense — and certainly safer health-wise — can also take an emotional toll on your partner and reflect a betrayal of trust.

When Harper-Rose, a 27-year-old comedian in L.A., found evidence in her boyfriend’s phone that he had made out with someone else, it was that fact compounded with the “emotional cheating” — sexts sent to multiple women on Snapchat, flirty texts with a female best friend, plus sh*t-talking her in group chats with friends — that proved so devastating.

The two were camping over Memorial Day when Harper-Rose says she felt an urge to look through his phone. “I typed my name in his search bar, and it lit up.”

The next morning, the two went on a walk as she, livid, told him what she saw. His response: “We should probably just call it.” He didn’t want to drive her the three hours back to L.A., so she called friends to pick her up.

The couple settled on one “quarantine friend” to socialize with. Mara then cheated with said friend.

“It’s not just that he was kissing this girl and probably doing other stuff too... It’s the emotional abuse, it’s the lying,” Harper-Rose says. The two had been dating on and off for a year and had gotten more serious in the five months leading up to the discovery; during the pandemic, they were together almost every day. “He would say things like, ‘I see a future with you’ — everything you would want to hear,” she recalls.

Being cheated on is always psychologically damaging, but when the person you’re isolated with, in whom you place your trust and rely on for emotional support, betrays you, that can make it even harder to cope — especially now that it’s harder to connect with family and friends.

“When it’s the person who’s supposed to be our safe space, our home, our partner... that could really put somebody into a devastating freefall,” says Sochet.

Anne*, 26, had just moved in with Mara*, her girlfriend of six months, in April. The two had discussed the move back in January and went ahead once quarantine made going back and forth between houses untenable.

Things began to implode pretty quickly after they started cohabiting. “She had been the one pushing to move in, and then as soon as we moved in, a switch flipped,” Anne says. Anne felt frustrated balancing working from home while giving Mara, who wasn’t able to keep her job, enough attention. And Mara began expressing a need for space, to get away and see her friends. Due to concerns about social distancing, they finally settled on one “quarantine friend” they agreed to socialize with, going over to her house and vice versa. When Anne went home for a week at the end of May to visit her family, Mara cheated with the friend.

Anne asked Mara to move out for a week so she could have time to process. When Mara returned, though, she confessed that she had spent the week staying with the other woman — even though she’d denied it when Anne asked a couple times over text, and during the week apart, Mara had sent Anne contrite messages like, “I know I’ve lost a good thing, I’ll do anything to get it back.” But when she confessed, the story changed: Mara said she did have feelings for the friend and didn’t love Anne in the same way.

“That’s when I told her I didn’t want anything to do with her anymore,” Anne says. The two broke up and are moving out.

According to Sochet, one way “to regain a sense of power is through [an] affair — which I think is an important point in terms of why it might be happening more now.” Feelings of powerlessness, and the ability to act freely and spontaneously, can inspire this need to “be deviant,” she says. “People are craving escape right now — from government restrictions, from the economy, from their children, from the incredibly monotonous routines of their lives, and [infidelity] is an escape.”

“I can forgive a lot, and have, but the dishonesty was the main factor of all of this.”

Sochet believes there is a way for couples to reconcile after infidelity, after each person has taken space to process emotionally, and if they’re willing to delve into whether the cheating was “a symptom of a much larger divide in the couple or a one-off.”

“I think a lot of feelings of being controlled, feelings of being restricted, moving in together, all came out on this one person because they were the one person we were able to see,” Anne says. But ultimately, for Anne, the betrayal of the cheating — and the lying about it — was beyond reconciliation. “I can forgive a lot, and have, but the dishonesty was the main factor of all of this,” she says.

The pandemic makes recovering emotionally from these situations more challenging as well, whether you’re isolated with your partner or alone post-breakup.

Gillian, 20, was quarantined with her boyfriend of three years while waiting to move back into her college dorm, which had shut down during the pandemic. When she decided to look through his messages and discovered he was exchanging nudes with someone else, she didn’t have anywhere else to go to process her anger.

“There’s not much you can do except sit here and think about it,” she says. “I’m sitting here waiting for my dorm to open up and I’m locked in with someone I have a lot of hatred for.

“I’m an emotional person but sometimes I forgive him and we talk about it rationally, and then I get angry again — it comes and goes in waves, especially when you’re locked in a house together,” she adds.

She admits that in normal times, it would be much easier just to break up, because she could meet someone else — in class, at a campus party — but with social distancing, she’s worried about feeling lonely and not getting an opportunity to talk to a guy in person.

For example, Harper-Rose, who ended things with her boyfriend after her ill-timed iPhone discovery, is coping with her breakup in isolation. Although she says she’s relieved they aren’t together anymore, and admits that if this were “the real world” she would deal by maybe partying or going out too much, being alone is “forcing me to sit with myself.” She says he’s reached out to her — not to apologize but to make excuses like “well, I felt insecure about our relationship” and to say he’s started therapy.

Now, when she finds herself getting sad or missing him, all she can do is call a friend: “They’ll have to snap me back out of it — ‘Just remember, he was a gaslighter.’”

More like this
Are Quality Time & Gift-Receiving Love Languages Compatible?
By Lexi Inks
The 19 Best Tweets & Memes About Bisexual Awareness Week
By Lexi Inks
How To Set Rules If You're In An Open Relationship
By Lexi Inks
10 Creative Sexting Ideas That Don't Involve Nudes
By Lexi Inks
Get Even More From Bustle — Sign Up For The Newsletter