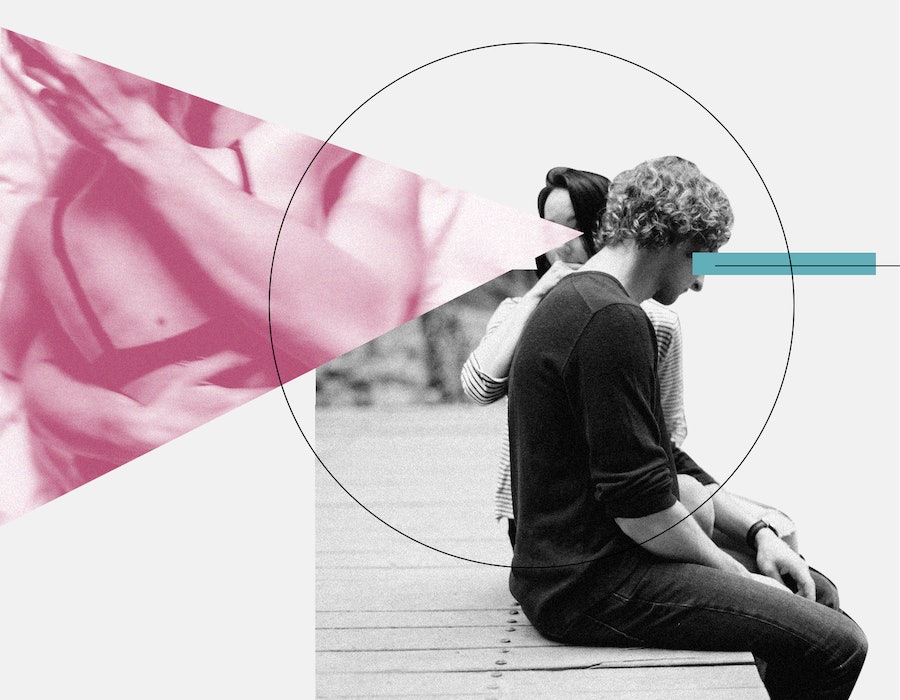 Lola, 27, a graphic designer, and Nico, 27, a surfer and skateboarder by day, and creative tech consultant by night, met on Bumble and have been dating for two years. Here, they tell Bustle what it was like to rebuild their relationship after one cheated.

L: Our first year was pretty wild. We casually dated for a few months. We partied a lot together. It felt natural and healthy.

N: I met Lola shortly after I moved to New York from California, so I was just starting to explore a new territory of friends, nightlife, and all that NYC has to offer. I was saying yes to a lot of things.

L: I was getting my bearings on life, feeling independent and successful in my career.

N: We were aware of how much we were hanging out together and tried to balance it with alone time throughout the week. But on the weekends we were always together.

L: At three months in, we became exclusive. About four months in, I knew I was in love.

N: I was no longer interested in being with anyone else. I could be myself around her without any worry or care in the world.

L: But Nico’s use of recreational drugs and his partying were things we’d argue about. He always said he was ready to slow down with me, but his actions proved otherwise at times.

N: We’d argue about stupid shit, like how to prepare food or cook properly. We both like to do things our own way, and Lola doesn’t like being told what to do. But then again, who does?

I thought our relationship was strong, and that my faulty actions could always somehow be repaired.

L: I can be really insecure and controlling. It’s hard for me to just let him have fun without me. At about a year in, I felt like I was being given empty promises.

N: The problem mostly had to do with my choices late at night. I lied — or refused to include details — about taking drugs.

L: I kept asking, “Do we have to break up? I want you to have friends, but this crowd makes me so uncomfortable.” And he kept agreeing with me. But then, a friend would come to town and he’d be up until sunrise on a Wednesday.

N: I was blind to the problem. I thought our relationship was strong, and that my faulty actions could always somehow be repaired.

L: Fast-forward a year later. I think my decision to be unfaithful to Nico was an unconscious consequence. I should have faced the fact that I felt completely defeated, but I cheated to force the relationship to end. I didn’t realize it, though, at the time.

N: We had just traveled to Utah together for my birthday. It was a weekend full of love, and I thought everything had gone back to normal.

L: Three days later, I told him. I think he knew when he came over. I don’t know if I’ve ever felt worse — I’ve never hurt anyone like that in my life, and I felt absolutely disgusting. I still squirm thinking about hurting him.

N: As I was biking to her house, my mind was going through every possible scenario trying to figure out what could be wrong, but infidelity never crossed my mind. I walked into her apartment, sat on her bed, and she told me that she had done “the worst thing in the world.” I felt numb — like I was in a dream. I was frustrated and angry, not necessarily because of what had happened, but because of the pain and the emotional journey that I knew we would both have to go through on our own. This was the second time I had been through something like this, so I knew only time could heal us.

I had never really done anything “morally wrong” before. It permanently changed the “good person” I thought I was.

L: We broke up for a little more than two months. I saw myself differently after that. I know he sees me differently. I had never really done anything “morally wrong” before. It permanently changed the “good person” I thought I was.

N: We both wanted closure in order to move on with our lives and agreed that we needed to focus on ourselves for the foreseeable future.

L: I came to realize a lot of the root issues behind my infidelity were based on commitment issues from my past relationship and my parents’ relationship. They’re still married but pretty much hate each other. I just felt so hopeless — like, we’re all going to get old and be miserable in our marriages. What’s the f*cking point [of monogamy]?

N: For the next couple of months, I focused on myself harder than I ever had in my life. I found a new job, was doing yoga every day, and got closer to my family. I dated around and had a few fun nights with friends.

L: Therapy helped me realize I’m in control of my life and I don’t have to follow the narrative of my family. I learned to cultivate the most independent and full life I’ve ever had. I knew I didn’t have to get back together with my partner just because I was sad without him.

N: That said, it was one of the most difficult times in my life. The loneliness was heavy.

L: One day, I was in a restaurant and saw him walk past the window. I ran outside to just watch him walk away, then started bawling. I texted him, and from that day on we talked, having conversations about how we missed each other. But at that point, we weren’t even considering getting back together.

N: We were both good at being vulnerable with each other because of how deep our relationship was. We met up for lunch one day, and it felt so good to just spend time together.

L: Seeing each other in person really made us start to consider getting back together. At first, we thought maybe it could be casual, but neither of us really wanted to do that.

N: We found ourselves slowly realizing that we both wanted the same thing again.

L: Our relationship feels different in most ways, but the same in some. Since COVID-19 hit, we've been living together and it’s going really well.

I thought I was pretty self-aware, with strong communication skills, but there was so much I hadn’t really uncovered until I cheated.

N: To me, our relationship mostly feels like an entirely new one. It feels like we’ve created something based on our past experiences. We’re also planning on moving into an apartment together in a few months.

L: Lifestyle issues still come up but at a quarter of the rate that they used to.

N: We agreed to go to couples' counseling when we got back together. It’s a good opportunity for us to address lingering problems deep down before they lead to future complications.

L: I’ve also worked through my commitment issues. I really didn’t realize how jaded I had become. I feel all in now, which is scary but really beautiful. I thought I was pretty self-aware, with strong communication skills, but there was so much I hadn’t really uncovered until I cheated. I feel like he gets me more now.

N: We're both good at checking in with each other about what happened and what led up to it. Talking about infidelity doesn’t feel weird. I think we both care deeply about the harm that we’ve caused in the past.

L: The cheating comes up from time to time. I made a point to extract myself from the person I cheated with and cut off all ties, which really wasn’t hard.

N: It almost never crosses my mind. It’s not that I push what happened away from reality. I just choose to focus on the present and future.

L: I still have a hard time trusting him. He didn’t cheat on me, but after a ton of little broken promises, I am always looking for another. I know what I did was worse, but I feel like I really worked through my issues. I trust myself. Ever since I cheated, he’s made such an effort to trust me and has never accused me or been overly suspicious. I think if the roles were reversed, I’d be much more insecure. I admire him in so many ways.

N: I trust her and I fully believe that what happened before will never happen again.

You have to know which flaws you’re willing to put up with, and I think that’s the real struggle.

L: I want him to know why he does what he does, so he can stand up for himself and honor his differing opinion. I don’t want him to agree with me just because he wants to avoid a fight.

N: I’ve learned that people make mistakes, but that time changes everything and emotions are temporary. While there are still situations that we need to grow through as partners, I’m constantly surprised at how easy it is to be with Lola.

L: At the end of the day, I feel hopeful.

More like this
18 Hinge Prompt Answers To Try If You’re Looking For Something Casual
By Lexi Inks
12 Active Date Ideas That'll Get You & Your Boo Outside
By Lexi Inks
TikTok's Voluntary Celibacy Trend Has Sparked A Movement
By Lexi Inks
5 Signs You Have A Toxic Relationship With Yourself
By Lexi Inks
Get Even More From Bustle — Sign Up For The Newsletter
From hair trends to relationship advice, our daily newsletter has everything you need to sound like a person who’s on TikTok, even if you aren’t.