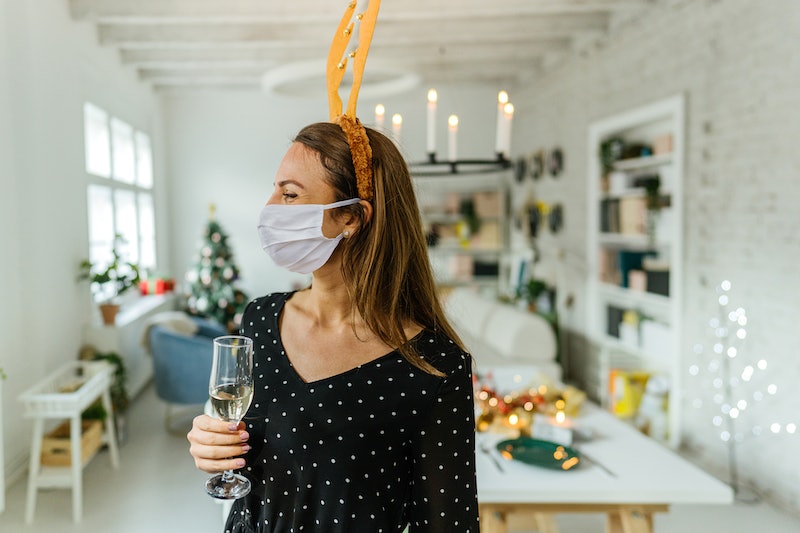 Elissa’s mother-in-law had been working in a busy public office throughout the pandemic, so the 30-year-old and her husband thought it would be reasonable — prudent, even — to ask her to get tested before visiting for the holidays. "When she told us that she was unwilling to get tested, we resisted the urge to argue with her, and agreed to spend the holidays separately." Though Elissa and her husband say they felt “hurt and annoyed," they "found peace" in upholding their values.

With a widely available vaccine just around the corner, the COVID-conscious are pleading with family members to keep their guard up just a little longer — continuing to mask, social distance, and get tested. But experts say that when it comes to this holiday season, picking your battles instead of indulging in every contention can protect your mental and physical health, even if it's hard to suspend care for your loved ones in the moment.

For Nicholle, 33, choosing not to battle with her family this holiday season has been hard. “My divorced family Christmas has two extra families to consider, and when one is not willing to respect the health standards that the other is enforcing, everyone misses out,” she says, adding that it’s been miserable trying to get both parents on the same page. “It sounds obvious that we would try to convince the person who is putting everyone else at risk to conform, so that we can all get together comfortably, but it’s not that easy.” Nicholle says in the end, the families decided it was better for everyone to do their own thing rather than try to change one person’s mind or risk their health.

“Generally when people choose their battles with some conviction, it can lead to increased self-confidence,” therapist Kelly Keck, L.M.H.C., tells Bustle. “What’s important is that you accept the things you cannot control or change and make a decision that feels reasonable and livable,” Keck adds.

There is so much to disagree on right now, it’s not worth it to me to argue.

Clinical therapist and life coach Caroline Given, L.C.S.W, says it’s equally as important to consider “what would feel like a self-betrayal" to not address. Ella, 28, tells Bustle she is constantly stressed about her brother's fraught relationship with masks, affinity for indoor dining, and flippant attitude about his own health. Though she knows she can't change his mind, she "can’t not try." Ella says that the rest of her family has taken a different approach and chosen to disengage. While she respects their reasons, she plans to continue attempting to educate him so long as she has the mental energy to do so.

Conflicts can emerge even among people who all consider themselves conscientious. "I have been quarantined for over two weeks in anticipation of meeting my new niece, but my sister is insisting that I get tested before going to her house," Erin, 29, tells Bustle. "I'm frustrated, because quarantining was enough of a precaution for me, and testing feels unnecessary, but out of respect for my sister and her boundary, I'm going to just get the test rather than try to change her mind," she says. “There is so much to disagree on right now, it’s not worth it to me to argue," she says.

Given suggests that these moments of conflict can be opportunities for self-reflection. "It can be easy to get caught up in a defensive spiral where you start to over-emphasize your view as being right or correct, and see any alternative or opposing view as a threat," Given says. "When we start to focus on our 'rightness' rather than being open and compassionate to one another, you lose your ability to communicate in a way that could produce any meaningful change," she says.

"It’s alright to ask people to respect your boundaries, but it’s important to note that those same people also have a choice," Keck says. "Safety and reassurance looks different for everyone right now — but it’s imperative to assert your needs," Keck says. Even if that means totally disengaging with someone dear.