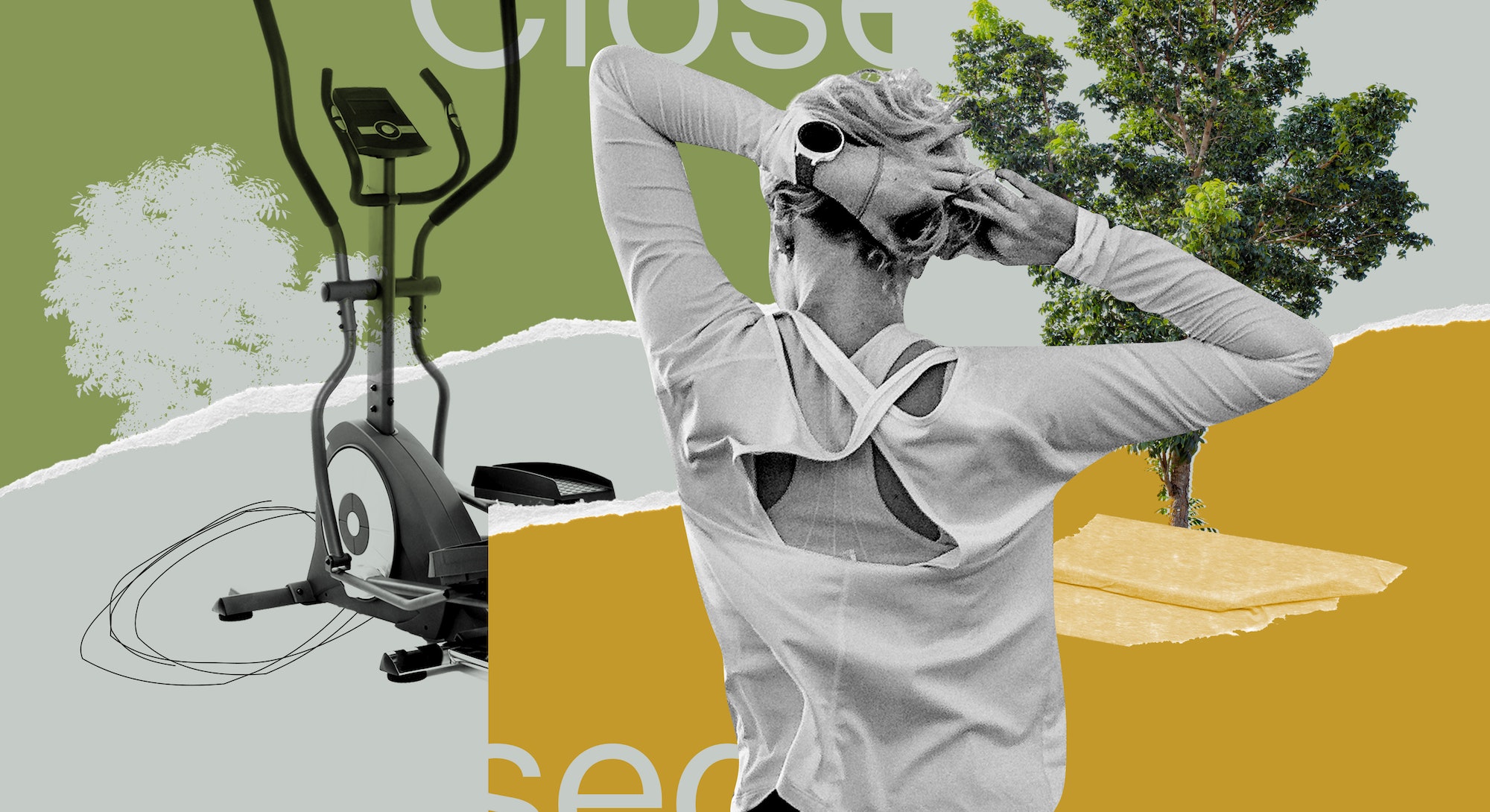 Before the COVID-19 shutdown I would, fairly religiously, go to the gym and do the elliptical for an hour. I used to only do it for about a half-hour, but a friend said going up to the full hour would keep me from being depressed. It did make me less depressed while I was doing it, but once I finished I was pretty depressed again. I told my friend this, and he said, "Yeah. That happens sometimes when sh*t really sucks big time, like more than normal sucking." I asked him what I should do about this, and he just shrugged and said, “Just do it anyway. That’s one whole hour where you’re not depressed."

When the gym closed in early March, I spent a few days being like, “Oh my God, what am I going to do without my elliptical?” It wasn’t that I had never been outdoors before. I knew it was kind of like a giant elliptical where the scenery changed all the time, that could be used for free, and didn't need to be wiped down after use. I just had really liked the gym habit, the neatness of it all, and the fact that I could kind of fake-run on the elliptical. (I can't run anymore because of my knees.)

I had no choice but to find another routine. I realized that walking up hills fast would make my heart beat plenty fast, and if I felt the need for more of a workout, there was no law preventing me from walking up a hill then walking down it and up it again. I started to walk about 3 miles a day.

I had two walks to choose from. One walk was over a boring bridge, through town, then through the woods over a beautiful bridge, then through more woods, and home. The other walk was over the boring bridge through town and then around a big loop, on a low-traffic, partly-paved, partly-dirt road. I did one of these two walks every day. It was time-consuming, about an hour and 15 minutes, but it was always the best part of my day. Honestly, there was not a lot of competition for that slot.

These two walks overlapped — it’s not a large town — and one day, while I was doing the first walk, it occurred to me I could just add the second one and walk longer. You would have thought I was discovering electricity. I could just go and make the best part of my day twice as long? It didn’t seem possible that one could simply step away from life tasks for two and a half hours. I had to go home, I had to work, I had things to do.

I started to walk like six miles a day every day.

Walking six miles a day, my view of the world became abstract, acid-inflected, but in a very wholesome way. This was partly because I was spending so much time alone in the woods. When you spend a fifth of your waking hours looking at trees, at their shapes, their different heights, their different shades of green, it’s kind of hard to not feel your mind continuously blown by how spectacular they are, how huge, how eerily and uniquely they exist in a space between being still and animated. Some of these towering things have a trunk that forks into two separate parts so that they look a lot like people planted in the ground upside down, their legs sticking up in the air. After walking for a week, I felt like the trees had feelings. After walking for two weeks, I started to feel sorry for them, and I even felt like they might feel sorry for me.

At first I was listening to books on my walk. Then I started leaving my phone at home. It enhanced the feeling of the trees and me commiserating. Also, the phone was a reminder that no one was trying to get in touch with me, and I had mixed feelings about this sudden and complete feeling of insignificance. I felt embarrassed that I’d ever felt even remotely significant. I liked that everything had gone quiet and that there was nothing to be done about this. Just looking at my phone made me feel like I wasn't accepting how life was, like I was willing it to be different, so I started to leave it at home.

I thought about how much it sucks that we spend all our time working when, in fact, this is a totally unnecessary state of affairs that benefits very few people.

Two and a half hours without a phone in a slowed-down town filled with blooming trees is a nice chunk of time to consider what we're doing. I thought about how much it sucks that we spend all our time working when, in fact, this is a totally unnecessary state of affairs that benefits very few people. I kept thinking about the fact that humans have an extremely small chance (if we have one at all) to save ourselves from destruction in the next few years, and that the only thing that could save us would be everyone just stopping, refusing to be part of the insistence on growth that almost no one questions, even though it is deadly. Right now I had this feeling of having stopped, but I had money from the government, I had food and a place to live, and I was only playing at stopping. While stopping felt good, it also felt very clearly like a toy that just a few people were allowed to play with while many people were still toiling away, still risking their lives to get the money that would allow them to survive. “How could everyone stop?” I kept asking myself. "How could we just all agree to stop and take care of each other?" The questions floated up into the air and over the forest canopy and then vanished into the sky.

When you walk six miles a day, you realize the world is so beautiful that you feel both good that you are finally doing it and also a profound sense of loss that you didn’t do it before. No matter how busy I have ever been in my entire life — I don’t have children, so there’s a limit to how busy that is — I’ve never not had time to do it. I would have had to give up other things, relationships, friendships, television, but it all would have been worth it.

I found this grove of trees not far from my house on an otherwise unspectacular residential road next to the freeway. It’s cedars and oaks and a lot of locusts, which are invasive and weedy but are also very lush and tropical-feeling. This grove is one of the most beautiful things I’ve ever seen, and people just drive by it every day. Before the lockdown, before I started walking every day, I probably never would have looked at this grove of trees. I would have just been like, "Ugh, the freeway is right there, it just ruins it." But it doesn’t ruin it. Ugly and loud and stupid as the freeway is, it doesn’t even come close.