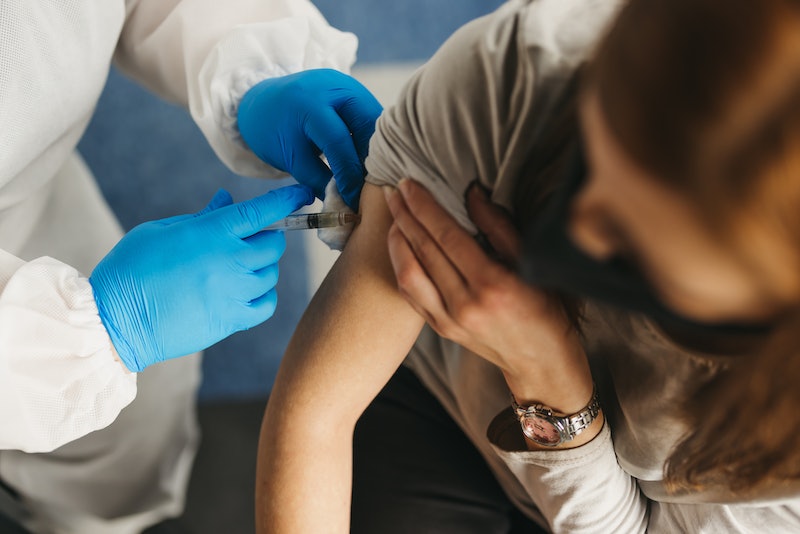 Courtney hasn’t seen her parents in over a year. The Seattle-based pediatrician, 33, works in a hospital, and as much as she was worried about their safety, traveling cross-country to see them in Florida was out of the question. When Courtney became the first person to get the COVID vaccine at her workplace in December — before her parents, who are in their 70s — her relief was soon accompanied by feelings of concern, and even guilt.

“I was almost happy-sad,” Courtney tells Bustle. As a physician, she knows that she needs to be protected from getting sick. Still, her thoughts turned to not just her parents, but also to postal workers, incarcerated people, and other at-risk communities at the time. “Looking back over the last month, it's been hard to watch … people with all the resources get [the vaccine]” before people who had to go to work in-person, or take public transportation.

Courtney, who has now gotten both doses of the Pfizer vaccine, is not alone in feeling some discomfort. For millennials who were qualified to get vaccinated in the initial rollout phases, the gratitude they feel may be mingled with guilt about getting the vaccine before people they think may need it more.

Ashley, a 32-year-old registered nurse in Putnam County, New York, has received both doses of the Moderna vaccine. “I definitely felt relieved that I was able to get it,” Ashley tells Bustle. “At the same time, I felt bad because people like my grandparents couldn't get it right away, and I felt like older folks deserved it more than I did.” She says she felt guilty that she could get it over people at higher risk of getting sick or dying from COVID.

“I do understand why they want us to have it first,” Ashley adds, “but there's still those feelings of guilt.”

Healthcare workers like Courtney and Ashley were almost universally the first people to be vaccinated. But with each state launching its own vaccine rollout plan, the people prioritized to get the vaccine has been varied across the country. Teachers in New York are currently eligible for the vaccine, for example, but not in Massachusetts. Grocery store workers in Illinois can get vaccinated as of early February, but not in Ohio. Some states are prioritizing people over 65, while others are trying to make sure essential workers are vaccinated first — and vaccine shortages have made it difficult to get a shot, even for those who are eligible.

“I do understand why they want us to have it first, but there's still those feelings of guilt.”

Claire, 33, is an elementary school teacher in the suburbs of New York City who got her first dose of the Moderna vaccine in mid-January. Though she was remote at the start of the pandemic, her school has been open for in-person classes since the fall, with teachers going virtual only if they are exposed to COVID-19.

“Right after getting it, I was like, ‘Oh, I'm going to be OK,’” Claire tells Bustle. But she quickly realized that there were a lot of people that she’d give up her spot for if she could.

For Claire, these mixed feelings have been compounded by reading news reports about how difficult it is for minority or low-income groups to sign up to get vaccinated. In New York City’s Washington Heights neighborhood, not too far from where Claire's based, a vaccination site meant to serve local communities of color ended up vaccinating many white people from outside the neighborhood.

Courtney also attributes some of her guilt around getting vaccinated to rollout inequities across the country. “[As a] Black person in this country, it's very clear who and what is prioritized,” Courtney says. Though she believes the vaccine should be prioritized in communities that are most affected by COVID — by and large Black and brown communities — she doesn’t see that happening.

Guilt like this is “part of the human experience.”

Experts widely say that perfect shouldn’t be the enemy of the good when it comes to the vaccine rollout, but people who have gotten vaccinated early on might still struggle with the complex array of emotions. According to Dr. Neha Chaudhary, a child, adolescent, and adult psychiatrist at Massachusetts General Hospital and Harvard Medical School and advisor to group therapy platform Pace, guilt like this is “part of the human experience.”

“It can be difficult to feel like you're the only one who is receiving safety, health, or shelter while others around you are suffering or may not have the same experience,” Chaudhary tells Bustle via email. “What's important is that you recognize that guilt for what it is and accept the feeling instead of trying to fight it — that's what sometimes helps a strong feeling dissipate.” That can look different for different people, but “reframing the experience as one that's helpful instead of undeservingly indulgent can help bring peace of mind," Chaudhary suggests.

“People can remind themselves that taking the vaccine is one more step toward helping not only yourselves, but others around you,” Chaudhary says. “Your action matters and multiplies in a really positive way.”

Although Courtney, Ashley, and Claire all had mixed feelings about being offered the vaccine early, they still chose to get vaccinated — partly to set an example for people who had doubts. “I got vaccinated and it made another coworker want to go get it,” says Ashley. “The more you see other people do it, it makes you feel better about it.”

Courtney, meanwhile, feels optimistic that her choice to get vaccinated will have an even broader impact. “[I hope] a visual of a Black doctor getting this vaccine would inspire our community that might not have the same trust as other communities, appropriately so, to be more engaged and get it.”

They say the benefits of getting vaccinated — both for themselves and their communities — outweigh any guilt they may have about being among the first to do so. “We have a responsibility to our community and to those that have been hit hard by COVID to do what we can to stop this virus and to control it,” Claire says. “And I think the vaccine is our best way.”

More like this
Why We Love Investigating Friendship Breakups
By Carolyn Steber
The Beauty Device Kristen Bell Uses Every Single Morning
By Carolyn Steber
How Many Burpees Should You Do Per Day? Here’s What Fitness Trainers Say
By Carolyn Steber
The 11 Benefits Of Aerial Yoga, According To Trainers
By Carolyn Steber
Get Even More From Bustle — Sign Up For The Newsletter
From hair trends to relationship advice, our daily newsletter has everything you need to sound like a person who’s on TikTok, even if you aren’t.