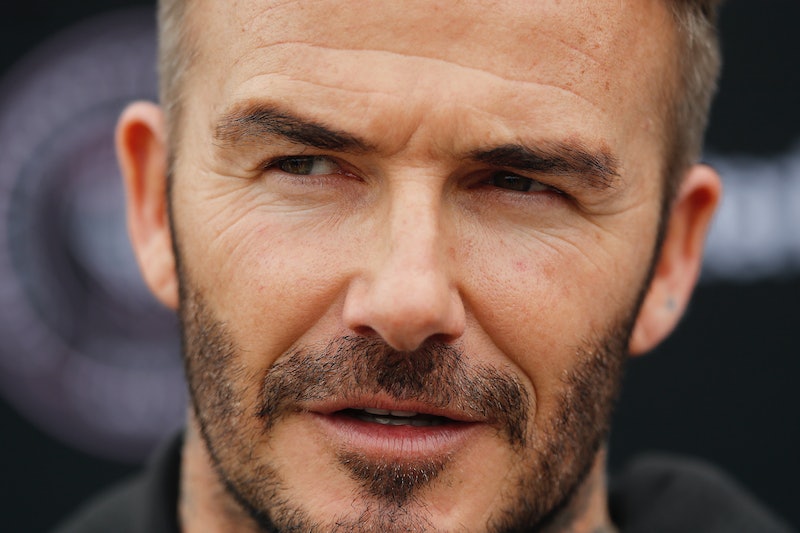 As part of his Head's Up Campaign, Prince William, the Duke of Cambridge, recently spoke with five football stars about the importance of prioritising our mental health. The royal chatted with Steph Houghton, Tyrone Mings, Andros Townsend, Carlo Ancelotti, and David Beckham about their own experiences with mental health and how they overcame low points in their careers. During the candid conversation, David Beckham opened up to William about some tough moments, including the 1998 World Cup, as well as how he approaches this subject with his own family.

"I'm the one who is preaching to my kids and also other kids that I talk to out there that it’s really important to talk, it's really important to say if you're not OK," said the father of four, during the call. "We all know now it’s OK not to be OK and it’s OK to say that, it's OK to come out and say 'I need help,.'"

The former England captain, who retired from football in 2013, also discussed his infamous sending off in the 1998 World Cup. Beckham was just 23 years old when he received a "brutal" reaction from both fans and the media that he says affected his confidence.

"When I look back on it now, I didn't realise how hard it was but I just remember the times where I faced adversity throughout my career, '98 was by far the toughest," he shared, "I made a mistake, you know, I made a mistake in '98 and the reaction at the time was pretty brutal. I was constantly criticised on the pitch verbally. If social media was around when I was going through that time in '98, it would have been a whole different story."

Beckham said he was lucky to have a support system in Manchester United and Alex Ferguson, but says it he didn't feel comfortable going to someone to ask for help. "It was a different era and I just felt I had to keep it all in and deal with it myself," he told the prince.

The six-way phone call followed an announcement that the Football Association had signed a joint declaration committing to making mental health a key priority at "all levels of the game." As their website explains, "[t]he Mentally Healthy Football Declaration will see governing bodies, leagues and organisations from across UK football recognising that mental health is as important as physical health, and pioneering a ‘team approach’ on this important issue."

Find out more about the Heads Up campaign on their website and royal.uk.

More like this
Chris Appleton Learned All His Top Beauty Tips From His A-List Clients
By Sam Ramsden
David Beckham’s Controversial Qatar Deal Skyrocketed His Net Worth
By Catharina Cheung
90 Epic Truth Or Drink Questions To Play 'Say It Or Shot It' With
By Bustle UK
Gen Z Are Twice As Likely To Identify As Queer, According To New Data
By Sam Ramsden
Get The Very Best Of Bustle/UK
Sign up for Bustle UK's twice-weekly newsletter, featuring the latest must-watch TV, moving personal stories, and expert advice on the hottest viral buys.