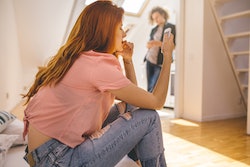 Cheating is one of those things that everyone thinks they know the definition of, but all it takes is asking two or more people what they think cheating means to figure out that it's not so cut-and-dry as you thought. While most can agree that "having sex" with someone outside a monogamous agreement is cheating, that's about where the mutual understanding ends.

That's on the more restrictive side of things. On the other end, there are couples who have agreements about outside sexual contact that view breaking those agreements as cheating. Maybe that means you're allowed to sleep with other people, but not anyone your partner knows. Or perhaps it means any type of sexual contact with other people is OK other than intercourse. In that case, having PIV sex would be considered cheating.

In a 2020 survey of 283 Bustle readers, it was found that more than half (53%) of readers have been cheated on, and a considerable amount (31%) have been the partner who cheated. Despite this, 85% of readers were not or had never been in an open relationship — indicating that monogamous commitments were much more common than not.

Additionally, according to Bustle readers, only 22% felt that having a crush on someone else was a form of cheating, while 69% thought meeting up with an ex and hiding it from their partner was cheating. Digitally speaking, one of the most debated “gray areas” of cheating among readers was liking someone else’s Instagram posts.

More like this
Help! My Partner Only Wants Sex Late At Night & Won’t Compromise
By Sophia Benoit
Experts Say These 23 Things Won't Happen In A Strong Relationship
By Carolyn Steber
15 Ways To Tell Someone Was Just Talking Behind Your Back
By Carolyn Steber
9 Common Phrases Sociopaths Might Use On The People They Love
By Kristine Fellizar
Get Even More From Bustle — Sign Up For The Newsletter

This article was originally published on Jan. 15, 2019