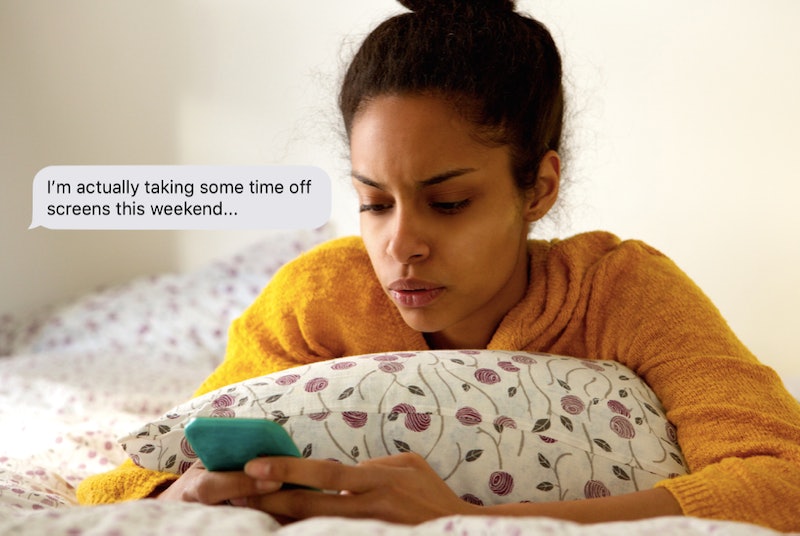 In the olden days (before social distancing), when a crush wanted to decline an invitation to hang out, they could claim to be "at work" or "busy with friends." But now, amid a global pandemic, when everything is closed, and everyone is sitting inside, glued to their phones, the only way to ghost someone is by taking a digital detox.

While you'd think the embargo on public events might hinder one's ability to make last-minute excuses, leave it to the gems I date to come up with new, innovative reasons for why they can't make it. When dating relies solely on technology, the only way out is off.

After a couple of days of sheltering-in-place, it became clear to me that I was going to need more human interaction than my roommates were capable of providing. I'd been following a fellow creative on Instagram, and after liking each other's quarantine-chic posts, I decided it might be time for a socially-distant slide into their DMs.

To my surprise, they replied immediately. They told me how lonely they were, quarantined with their parents, and what a relief it was to connect with another person. For the next few days, we exchanged messages, swapped GIFs and music recommendations, and shared articles we'd enjoyed reading. We'd take turns complaining, confessing our fears for the future, and offering suggestions of what to make for dinner.

I loved having a quarantine crush — someone cute to gab with in self-isolation who wasn't my roommate's dog or the Amazon delivery person. We found love in hopeless, contactless place, so as the weekend drew closer, I resolved that it was time to kick it up a notch. I messaged my crush asking if they wanted to FaceTime, aka the social distancing version of, "Want to grab a drink this weekend?"

I was shocked to find that people can still be so committed to roundabout-rejection, even when they're sitting in their sweatpants at home, baking sourdough bread on Instagram Live.

When I saw "Typing..." pop up, I began daydreaming about their response. Would they claim to be working up the courage to ask me out? Suggest we do a fun activity over Zoom? Ask for my address, so they could send me a bottle of wine?

But when my phone finally pinged, their response made my eyes roll so far back inside my head, I felt like I was riding Kingda Ka.

"Uh, sorry," they said. "I'm actually going to ban myself from screens for a while, to attempt to become one with nature. Or something."

That's right, folks. Instead of hitting me with an, "I'm just not that into you," a content creator for a digital publication opted to tell me that they were not planning on using their cellphone or computer for the foreseeable future. All to, presumably, get out of going on a FaceTime date with me. Casual!

At first, I tried to cut them some slack. According to Dr. Carla Marie Manly, clinical psychologist and author of Joy from Fear, people often give phony explanations to avoid conflict or hurting someone's feelings. When you're not into someone, claiming to be "so busy at work" (or going on a cellular strike) can help cushion the blow.

But Dr. Manly also shares that lying your way out of plans doesn't just hurt the people you're rejecting — it hurts you.

"A pattern of telling 'white lies' can reduce sensitivity to dishonesty and lead to greater dishonesty over time," Dr. Manly says. "Now that you can’t tell a 'white lie' about having another engagement, you have the opportunity to increase your honesty-based skills and personal boundaries."

I did what they couldn't: I officially pulled the plug.

Look, I'm all for giving your body what it needs, but there's a difference between "I'm not using my phone" and "I'm not using my phone to FaceTime you." I was shocked to find that people can still be so committed to roundabout-rejection, even when they're sitting in their sweatpants at home, baking sourdough bread on Instagram Live.

I get it: Telling someone that you're not feeling them can be intimating. But instead of finding new ways to blow people off, perhaps self-isolation can be a time to reflect on what you want, what you don't, and how to honestly and directly communicate that to the people you date (or politely reject).

When my crush posted on Instagram a few days later, I thought about calling them out. But ultimately, I decided against it. Instead, I did what they couldn't: I officially pulled the plug.

More like this
35 Sexy Texts To Send Your Partner
By Griffin Wynne and Carolyn Steber
Are Quality Time & Words Of Affirmation Love Languages Compatible?
By Lexi Inks
8 Flirty Games To Play Over Text With Your Crush
By Lexi Inks
The 3 Dating Apps Queer Women & Nonbinary Folks Actually Like
By Emma Carey
Get Even More From Bustle — Sign Up For The Newsletter