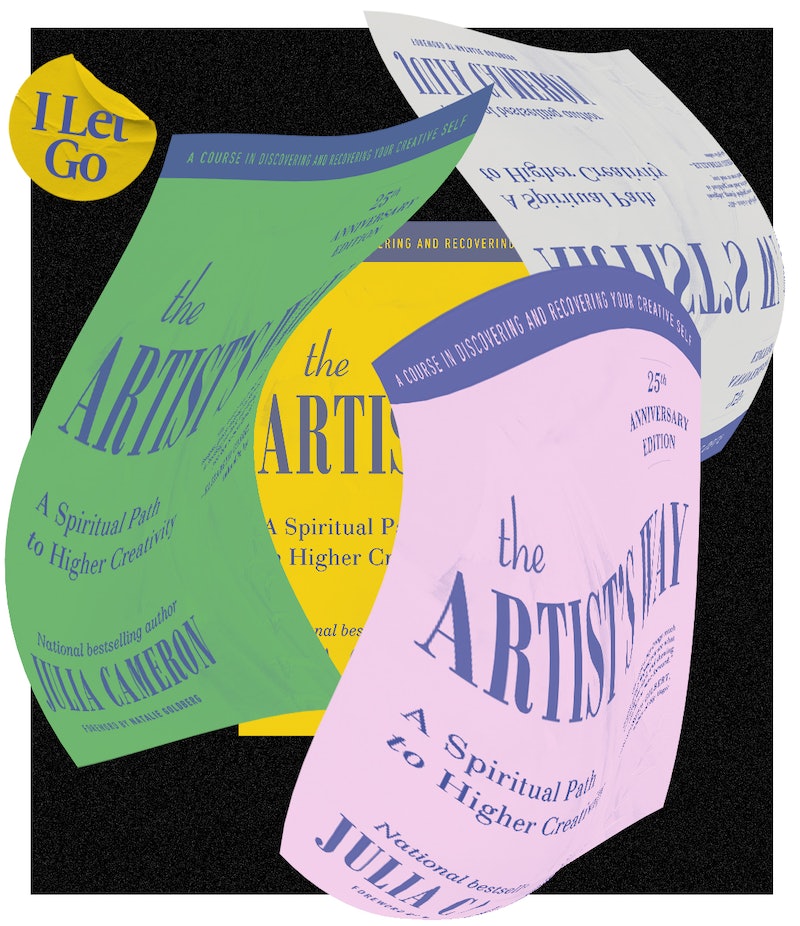 I don’t really believe in writer’s block, at least not as an organic syndrome. I didn’t write much of anything I didn’t have to in 2020, or 2021 so far, for that matter, but that’s because I was depressed, anxious, and bored. Without social stimulation, or daily variety, or any real structure other than mealtime, I had very little from which to draw inspiration (though I did write a note to myself proposing a book about “a woman who goes insane in the suburbs”). For 10 years, writing books has been how I map out my life. It gives me the illusion of control, and when I’m not writing one, I feel a little pointless. I’m not saying that’s true, so please don’t reassure me — it’s just how I feel. I can tolerate about four months’ worth of waiting for an idea, and then I get desperate. This time, the result was that I finally read (or “did”) The Artist’s Way.

The Artist’s Way, first published in 1992, is a sort of self-help writing workshop by Julia Cameron, a writer, playwright, and filmmaker. In the years since its publication, the book has become a phenomenon, beloved both literally and semi-ironically. Its most famous artifact, “morning pages,” are referenced often by Hollywood creatives and aspiring novelists with nearly mystical reverence, something I would have loved to have felt at any point this past year. I knew that morning pages were basically journaling, and I knew I had never been very good at consistently journaling, but I wanted to believe that this time would be different.

Morning pages, as prescribed by Julia Cameron, involve writing three pages of whatever in a journal every morning, no matter what. It doesn’t have to be good, she writes, and it’s almost better if it’s bad, because then you empty your brain of bad writing to make way for the good. What you write isn’t as important as the fact that you’re writing; it’s the ritual of the thing that works, over time, to unlock the artist within.

The Artist’s Way is over 200 pages long, so there’s more to it, of course; readers are also meant to go on “artist dates” (difficult to do in lockdown) and complete writing prompts at the end of most chapters. For people who’ve never been to therapy before, these exercises might prove profound, but to me, a longtime consumer of Prozac and recent fan of Wellbutrin, they were more eye-roll-y than illuminating. (Finish these sentences: “Taking time out for myself is…”; “As a kid, I lacked…”; “In my family, money caused…”) The Artist’s Way is 200+ pages long, so between these exercises, there is a great deal of advice, woo-woo cheerleading, some anecdotes about anonymous (though famous) friends who’ve found success through Cameron’s methods, and a number of genuinely moving passages I highlighted sincerely. Like most self-help books I’ve read, The Artist’s Way is repetitive, and I fell off the reading part of the assignment early.

Still, for five or six weeks, I kept writing my morning pages, and I kept waiting. I wrote about the day I’d had before, and the plans (“plans”) I had for the day ahead. I wrote about how bored and anxious I was, and how frustrated I was not to have any good ideas. I wrote one day that I had half an idea for a book, and the next day wrote that it was, upon further reflection, a very bad half-idea. I kept at it for weeks, waiting to feel something besides resignation when opening my notebook, but it never came. And eventually, I came to the same conclusion I reached when deciding to quit a therapist last winter: I knew exactly what my problem was, and no amount of staggeringly boring journaling (or talk therapy) could change the material and miserable conditions of my life as it currently stood. So I stopped.

Then things — I don’t want to say things got “better,” because that isn’t really accurate, but they changed enough, finally, to allow me to move forward. I moved back to New York. I watched all eight seasons of Married to Medicine. Somewhere along the way, I had an idea for a book. I don’t know if it’s anything yet, but for now, I don’t care. It just feels good to write when I want to, because I want to, instead of doing something I don’t enjoy just because a stranger says it’s good for me.

What I don’t like about self-help is the implied causality; Artist’s Way acolytes might see that I’ve admitted to being inspired some time (months) after reading (part of) the book and conclude that it “worked.” Sure. By the same rationale, the creativity candle I bought from a witchcraft supply shop five years ago worked also. What I think really happened was this: I tried and tried to force inspiration, but, as per usual, I couldn’t. For a very long time, I didn’t feel like I had anything to say, and now I think I might. There isn’t any particularly spiritual reason for that, I don’t think; it’s just time.