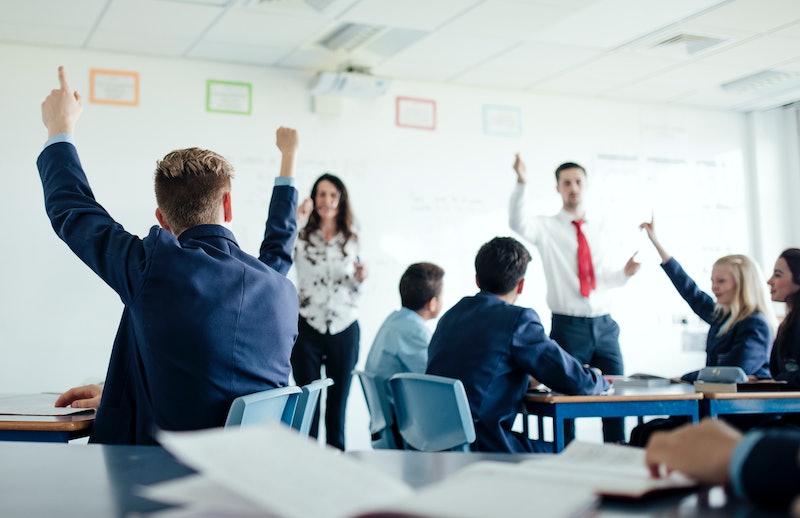 The Department of Education's released new guidelines in February 2019 on Relationships and Sex Education (RSE) in schools, which stated:

"In teaching ... RSE, schools should ensure that the needs of all pupils are appropriately met, and that all pupils understand the importance of equality and respect. Schools must ensure that they comply with the relevant provisions of the Equality Act 2010, ... under which sexual orientation and gender reassignment are amongst the protected characteristics."

The new guidelines state that schools "should ensure that this content is fully integrated into their programmes of study for this area of the curriculum rather than delivered as a standalone unit or lesson."

While these instructions have been handed down by the government, it is up to individual institutions to decide how they'd like to carry them out. The guidelines state that schools are "free to determine" how and when LGBT topics are approached, but that the government expects "all pupils to have been taught LGBT content at a timely point as part of this area of the curriculum."

The guidelines have been updated in other areas, too. Now, as well as learning about topics such as contraception and safe sexual practices, students will be informed about consent, abortion, and domestic abuse. The guidelines ask schools to be "alive to issues such as everyday sexism, misogyny, homophobia, and gender stereotypes and take positive action to build a culture where these are not tolerated, and any occurrences are identified and tackled." And in order to address the digital world's effect on young people today, the guidelines ask that schools provide education on internet safety and the laws around sexting and pornography.

There is also a focus on mental health in these new guidelines, with schools being told to teach pupils "how to talk about their emotions accurately and sensitively, using appropriate vocabulary" and "how to recognise the early signs of mental wellbeing concerns."

The introduction of these new guidelines comes after years of campaigning from organisations such as the Terrance Higgins Trust, the UK's leading HIV and sexual health charity. In 2016, the Terrance Higgins Trust surveyed almost 1,000 young people to ask them questions about LGBT-inclusive RSE. The survey found that 97% of students thought that all SRE should be LGBT-inclusive but only 5% were taught about LGBT sex and relationships.

This change does not come without its caveats, however. In June 2019, a petition was brought forward that demanded parents should be able to opt their children out of RSE classes. After six months of debate, the government conceded, stating "As primary educators, parents must be consulted on their school’s curriculum for Relationships, and Relationships and Sex Education and may request their child’s withdrawal from Sex Education." This means, despite new sex education classes being carried out in schools around the country, not all pupils will be attending them.

More like this
Gen Z Are Twice As Likely To Identify As Queer, According To New Data
By Sam Ramsden
90 Epic Truth Or Drink Questions To Play 'Say It Or Shot It' With
By Bustle UK
"Lavender Haze" Star Laith Ashley Breaks Down Filming With Taylor Swift
By Jake Viswanath
Ozzie’s Coming Out Scene With Kitty On 'That ’90s Show' Has Twitter Sobbing
By Brad Witter
Get The Very Best Of Bustle/UK
Sign up for Bustle UK's twice-weekly newsletter, featuring the latest must-watch TV, moving personal stories, and expert advice on the hottest viral buys.