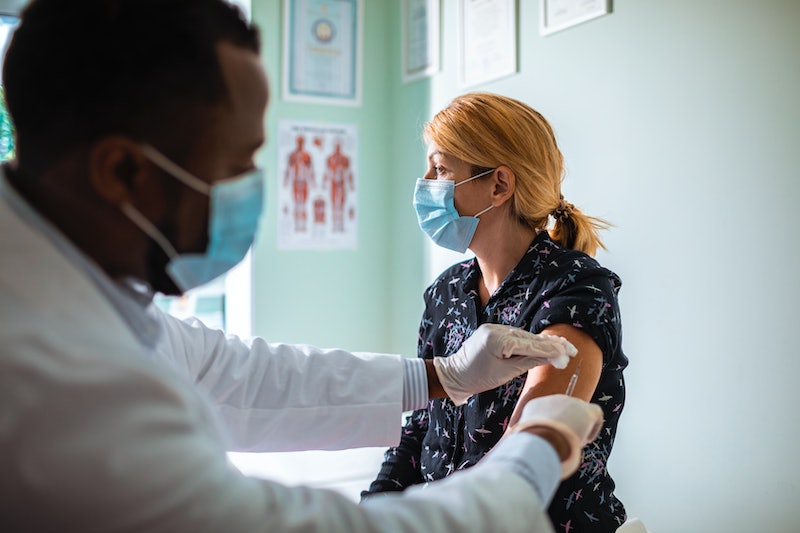 Even if you hate needles — haaaaate hate hate them — 2020 is the year to grit your teeth, put on your favorite face mask, and get your flu shot. Never done it before? Make this year a first. The 2020-21 flu shot will be effective at keeping people from getting the flu, and keeping our healthcare system from being overwhelmed by flu and COVID-19 patients at once.

Why Get The Flu Shot In 2020, According To Doctors

"It’s important to get the flu vaccine this year for several reasons," Dr. Julia Blank M.D., a family medicine physician at Providence Saint John's Health Center, tells Bustle. For one, she says, immunity from the previous vaccine wanes in about six months, so it won't protect you from year to year. "It’s important to boost your body’s production of antibodies each flu season," she says. On top of that, the flu itself evolves season to season; last year's vaccine won't protect you as well against this year's strain. "The flu vaccine is updated each flu season to better match the surveillance data about which strains of flu virus are currently circulating and predicted to circulate during the coming season," Dr. Blank says.

In the winter of 2018-19, around 490,600 people in the U.S. had to be hospitalized for flu, according to the Centers for Disease Control & Prevention. As of Sept. 8, over 380,000 people had been hospitalized for COVID-19 in the U.S., according to the COVID Tracking Project. "If we see a large rise in serious flu and COVID cases at the same time this fall and winter, our health system may become overwhelmed, and this in turn may lead to greater morbidity and mortality," Dr. Blank says. Getting vaccinated is also useful for diagnostic purposes. If you've had the flu vaccine and then later wake up with a fever and a cough, your doctor can send you off for a COVID-19 test quick smart.

How Do Flu Shots Work?

The most common flu vaccine is quadrivalent, meaning that it targets four separate strains of flu. Each quadrivalent vaccine protects against two A-types of flu and two B-types. A-types are found in both humans and animals, while B-types affect only humans. Dr. Blank says three of those vaccines have been updated for the 2020 flu season, based on what strains have developed over the past 12 months. (If you're allergic to egg, you'll get a slightly different type of flu shot, but your doctor will talk you through what that means for your immunity.) Five centers for flu surveillance around the world, in London, Beijing, Atlanta, Melbourne, and Tokyo, coordinate twice a year to pool their research on emerging flu strains in order to develop the vaccine for the following season. They coordinate flu shots for both hemispheres, based on the strains that are popping up.

How effective the 2020 flu shot is likely won't be known until later in the season, once it's had time to do its thing. A Centers for Disease Control and Prevention study in 2019 found that the vaccine that year was 39% effective for all age groups, and 42% effective for people over 50. The European Center for Disease Control and Prevention estimates that vaccines for the most common A-type and B-type flus are between 30 and 60% effective every year on average.

Getting the flu shot isn't a 100% guarantee that you won't get the flu. It only targets the most common varieties, and if a less-common strain starts circulating, you're not protected against it. But even if you do get the flu after getting the vaccine, research shows that it reduces the likelihood of severe symptoms by 40 to 60%, making it a good investment for your health.