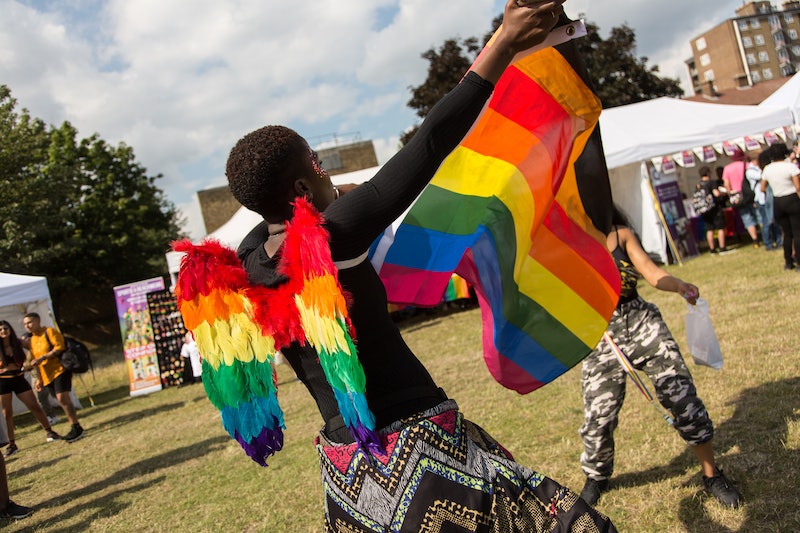 It has been 15 years since Phyll Opoku-Gyimah travelled to Southend-on-Sea with a "busload of Black lesbians for a day of rest, respite, and community," as the UK Black Pride co-founder (who also goes by Lady Phyll) puts it. And the annual festival has been the pride-home for LGBTQ+ people of colour ever since. While the pandemic has postponed their planned celebrations, UK Black Pride will take its festivities online this weekend and here's how you can get involved.

On Sunday, August 16, the online celebration will feature an exciting array of performers, speakers, hosts, and organisations from 12 p.m. until 6 p.m. The festival can be accessed via the ukblackpride.org.uk website and will be spread across four ‘rooms’: Main Stage, Wellbeing, Desi, and Queer Young Folx.

The virtual Main Stage will feature speakers and performers, including model and activist Munroe Bergdorf, Drag Race UK contestant Vinegar Strokes, and speeches from Dominique Jackson (Pose). It will be hosted by actor, playwright, and director Rikki Beadle-Blair MBE.

Alongside the Main Stage, the Wellbeing, Desi, and Queer Folx rooms have heaps of planned events to participate in too. Expect Bollywood dances, K-Pop performances, burlesque, and much more.

For Lady Phyll, who also acts as UK Black Pride's executive director, the digital festival will help to continue the organisation's commitment to both celebration and protest.

"We started UK Black Pride as a celebration, yet celebration and protest go hand in hand," Lady Phyll explains to me ahead of the event. "UK Black Pride is a declaration about who we are. It’s more than just one event. It is an actual movement, with workshops, seminars, and more, teaching how to tackle inequalities in Black, BAME communities."

Speaking about why this year's 15-year milestone is so important, she says, "I’m filled with so many different emotions. It’s not been an easy feat. There's been so much resistance from people who believe we should just join the 'normal pride' or think we are 'separatists.' It’s so positive that a Black, POC organisation has stood the test of time, even though the political unrest."

In conjunction with UK Black Pride, the festival has launched the "This Is Me, This Is Home" digital campaign to "reaffirm UK Black Pride's mission as the 'pride-home' for Black and BAME LGBTQ people across the UK," a their website explains.

Chatting about the meaning behind the campaign, Lady Phyll says, "We’re living in peculiar times. Many LGBTQ+ people of colour are in homes that are not comfortable or accepting. UK Pride is home — for me, it's more than a place, it's a feeling."