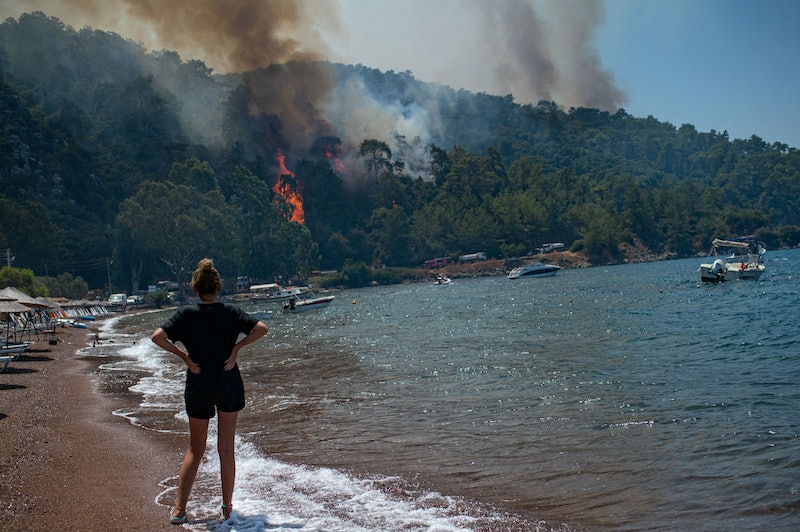 Raging wildfires have ravaged Turkey, rippling through the southern part of the country since the final days of July. So far, at least eight people have died, including two firefighters, while thousands have been forced to flee their homes.

180 fires have broken out in Turkey since July 28, according to The Guardian. And the fires are still raging on in certain parts of the country, such as Bodrum, Manavgat, and Marmaris, which are popular tourist destinations on the Aegean and Mediterranean coasts. This year, nearly 95,000 hectares of forest have been destroyed by the wildfires, compared to an average of 13,516 during the same time of the year from 2008 to 2020.

The fires have been caused by an extreme heatwave in the region, with temperatures soaring to 46.3 degrees in countries like Greece, which have also seen devastating wildfires spread. The island of Evia has been particularly hard hit, with 150 homes destroyed in the blaze. Athens too has been affected.

Climate change is being largely cited as the reason behind the wildfires across southern Europe. The region has seen the most severe heatwave in the region for more than a decade this summer, with a record-breaking temperature of 46.3C recorded in Greece this week. Dry conditions caused by lack of rainfall, combined with strong winds have contributed to the spread of wildfires.

While not immediate solutions to the underlying causes, there are many affected by the spread of these fires, in need of immediate medical attention, temporary shelter, and sustenance. Here are some of the organisations taking donations to help the wildfire crisis in Turkey, Greece, and beyond.

According to the organisation, Turkey is home to many unique species which are at risk due to the wildfires — one province in particular, Antalya, is home to 11,870 species, of which 1,421 are endemic and 121 are endangered. The World Wildlife Fund is therefore raising money to stop fires, care for injured wildlife and build sustainable rescue and rehabilitation facilities. You can donate here.

Local Greek news outlet Greek Reporter set up a GoFundMe campaign, just like they did following the fires at Mati in 2018, to support the victims of Evia Island. Per their article about the campaign, “the funds will be donated in person, on Facebook Live for full transparency, to those who are most in need. You can donate here.

Support charities working on the ground across Europe like the International Red Cross, with works during and after disasters and health emergencies to help those affected.