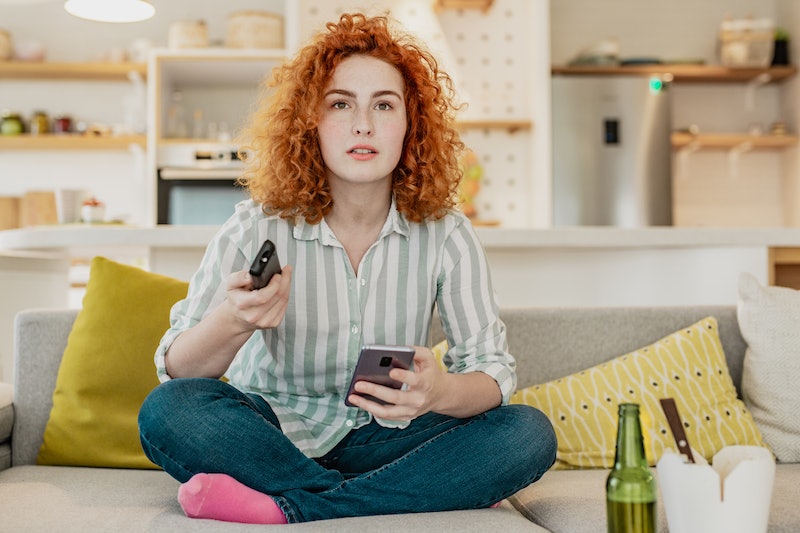 You've settled in for a night of relaxation — aka scrolling on your phone while marathoning Netflix on your laptop at the same time. A lot of people find this soothing, even though it seems counterintuitive: how can you really enjoy an afternoon of The Good Place when you're also doomscrolling?

"As humans we have five sensory inputs or senses, which are sight, sound, smell, taste, and touch," Dr. Clifford Segil D.O., a neurologist at Providence Saint John's Health Center, tells Bustle. It's common to enjoy ourselves by indulging more than one sense at a time. Ancient Romans, he says, loved the Coliseum, where both eyes and ears were engaged (and probably the nose, too). Nowadays, a lot of modern media operates along the same lines, mixing sensory outputs to grab your attention. The technical term for this is divided attention, where you try to focus on several things at once.

Focusing on several things can be enjoyable, Dr. Segil says, because it engages different brain areas simultaneously. "Having multiple sensory inputs occurring without great focus is calming and pleasantly distracting," he says. It might not be super helpful for your memory — a study published by UCLA in 2019 in Psychological Science found that people who divided their attention retained less information about what they experienced, for less time, which is why multitasking can be a poor study technique. For relaxation, though, skimming between things that don't compete too intensely can keep your brain engaged without challenging it too much.

"The key to relaxing with multiple inputs is to balance the stimulation from all the sources, so you can focus on all them in a way that is balanced and produces a light focus," Dr. Segil says. If you start trying to provide full attention to everything at once, or they start to clash, you might stress yourself out.

How can you really enjoy an afternoon of The Good Place when you're also doomscrolling?

Not everybody enjoys splitting their attention. "The irony of multi-tasking or bombarding yourself with multiple media at once is that you are choosing numbing out as self-care," psychologist Robin Hornstein Ph.D. says. "The human brain is capable of splitting the work or attention up to a point, but it does not do all of those tasks well." She doesn't believe that multiple inputs can be calming in the long term.

Mindfulness, the practice of devoting attention purely to one's own body and surroundings — in other words, the complete opposite approach — has shown a lot of promise for helping mental health. If you've spent a lot of time with media lately and felt bothered by it, you may want to put all your devices away and recalibrate a bit. "Make a promise to yourself to augment your life with a mindful task that centers you," Hornstein says. She suggests eating an apple a bite at a time, focusing all your senses — smell, taste, sound — on this one activity. "True self-care allows the mind to be aware of itself and its surroundings while inviting the other senses to seep in," she says. Then you can go back to scrolling Instagram while catching up onThe Crown.