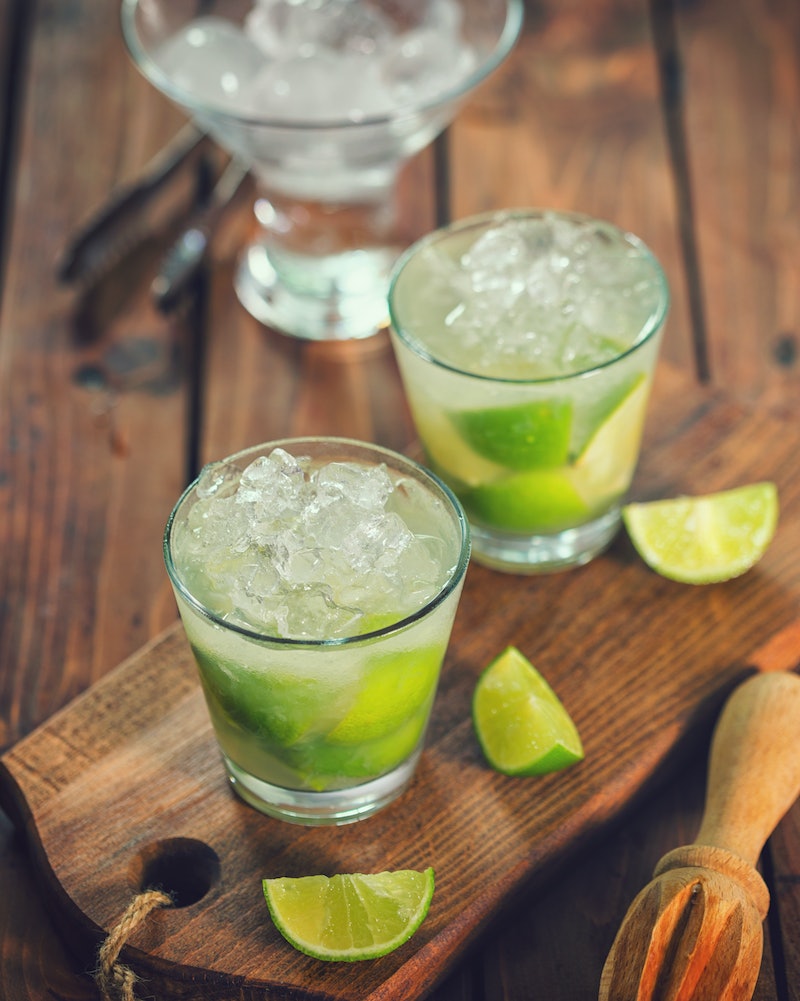 Hard seltzers like White Claw may have been the one thing that helped you through sweltering summer, but they're not quite like other mixed carbonated drinks. If you've noticed that a night out with White Claw in hand affects you differently than an evening devoted to, say, vodka sodas, you're not wrong. There are a lot of similarities between hard seltzers and vodka sodas, including their combination of fizzy carbonation and liquor, but there's one factor that distinguishes White Claw and its ilk: sugar.

"Hard seltzer is simply a mix of seltzer and alcohol, but it differs from the usual spirits on the shelf," Dr. Shadi Miri M.D. at medical provider One Medical, tells Bustle. "Since it is fermented from cane sugar instead of wheat or grain, this sugar-brew is lower in alcohol-by-volume (4-6%)." A lot of your favorite spirits will be made from grains: vodka is fermented from grains such as corn and rice, though you can get potato vodka or even milk vodka. Gin is often made from wheat or rye, while whiskies tend to be made from barley grains. Pure cane sugar spirits aren't all low-alcohol; cachaça, the Brazilian sugarcane spirit, packs a hell of a punch. But White Claw's mix of carbonated soda and spirits makes it a lower-alcohol choice. Depending on how much mixer you like in your vodka soda, a hard seltzer could have less alcohol per drink.

All soda-infused tipples, whether they're seltzers or mixed drinks, can feel like a rush to the head. "Drinks aerated with carbon dioxide are absorbed into our bloodstream quicker, which is why you may feel the effects of hard seltzers a bit faster, especially on an empty stomach," Dr. Michael Richardson M.D. at One Medical tells Bustle. This is also why champagne can make you very drunk very fast if you haven't eaten a lot beforehand.

Vodka has another similarity with White Claw: it also contains low levels of hangover-causing compounds. "Hard seltzer does not contain congeners, with their toxic byproducts, that contribute to hangover symptoms," Dr. Scott Braunstein M.D., regional medical director at Sollis Health, tells Bustle. Congeners are compounds that show up in alcohol as a result of the fermentation and distilling process, and they're partly responsible for the wallop of heavy hangovers. Red wine has a big whack of congeners, but clear liquor like vodka hasn't got many, and neither do rum or gin.

It's the sweetness of White Claw and other hard seltzers that can really make a difference to your morning after. "Hard seltzers are frequently sweetened and are smoother than hard alcohol," Dr. Richardson says. That means you can drink them very fast, he says, perhaps without realizing how many you've consumed. That can cause your blood alcohol levels to rise; even low-alcohol drinks add up in the bloodstream over time. Vodka sodas and other mixed spirits are often served unsweetened, meaning that they give you more incentive to sip slowly over time. If you like sweetened vodka cocktails, though, the same issue may arise: suddenly you've drunk four and you know all the words to "Mambo No. 5."

"Be sure to pace yourself appropriately, as these carbonated drinks may sneak up on you quickly," Dr. Richardson says. And if you love a taste of sweetness in your seltzers or sodas, it's good to be aware that it could change your drinking behavior.

More like this
The 11 Benefits Of Aerial Yoga, According To Trainers
By Carolyn Steber
All The Reasons Your Gums Bleed When Brushing Your Teeth
By Carolyn Steber
How Many Burpees Should You Do Per Day? Here’s What Fitness Trainers Say
By Carolyn Steber
Do Green Powders Work As Well As TikTok Says They Do?
By Carolyn Steber
Get Even More From Bustle — Sign Up For The Newsletter
From hair trends to relationship advice, our daily newsletter has everything you need to sound like a person who’s on TikTok, even if you aren’t.